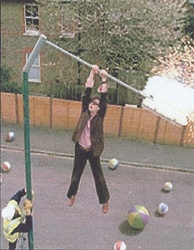 So, what about that BT advert then Jarvis? (X-Ray magazine, November 2002):

Yeah, what about it? (laughs) No, the people who made it are Hammer and Tongs, they did a couple of videos for us and I've kept in touch with them. And yeah, I have turned down a lot of advert stuff before but they sent me a script and I knew if they were doing it it would be alright. How hard I was by hanging off that lamp-post? I do all my own stunts, me. It was just a bit of fun really. And yeah, the pay's not bad. Maybe I'll be able to put a deposit on a flat in Paris.

Retrieved from https://pulpwiki.net/Jarvis/September2002BTBroadbandAdvert
Page last modified on October 18, 2011, at 08:48 PM