18 minute interview with Jarvis Cocker and Steve Mackey coinciding with the release of We Love Life, plus promo videos. 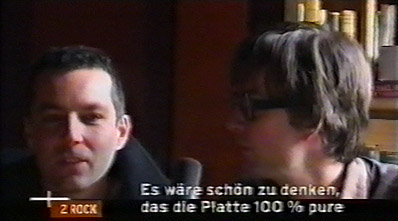 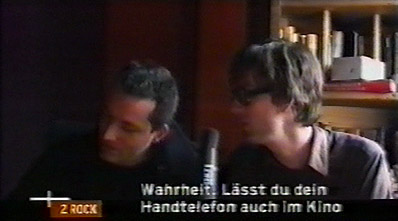 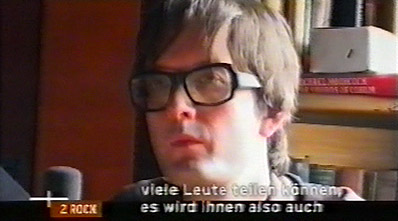 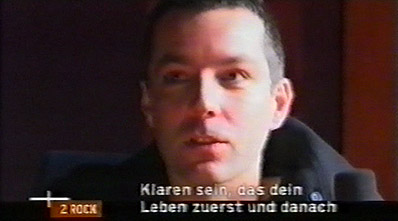 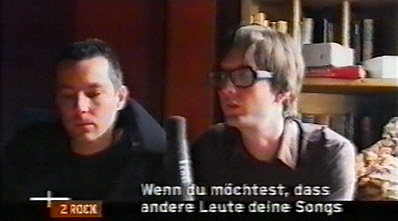 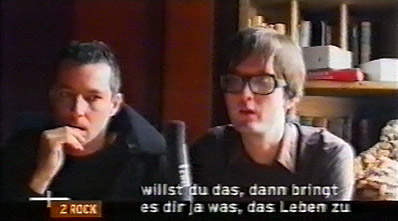 [Work in progress]
J: Yeah, I mean when we first started this record we thought that it was going to be quick, didn't we?
S: Three weeks we...
J: Yeah, that's what we thought.
S: ...were looking at.
J: And that's kind of why we started work with our old producer Chris Thomas because we thought: 'Well, we know him, so it'll be quick'. But we were wrong. Erm, we recorded some stuff and we weren't happy with the sound of it and so rather than just carry on hope that we could fix it later, we just decided to stop it. And I'm really glad that we did that, because everybody in the group agreed and I think it brought us closer together.
S: [smiles]
J: And then we went through a strange period when we didn't know what to do. And then, err, we met Scott Walker and our manager asked him if he would consider producing our record and strangely enough he said yes. So then we had to decide whether we thought that was a good idea. Whether it's a good idea to work with somebody who might have been one of your heroes at some point. Erm... met him; played some of the stuff we'd already done and tried to explain why we weren't happy with it; he seemed to agreed on what the problems were with it. And so we just went in to record four songs, and see how they came out, and it turned out well, so we did it. 'Cause we wanted to make a record in a way that was less produced than stuff we'd done before, that was more just us getting together in a room and playing. I mean we did do over-dubs and things like that...
[Steve's mobile phone rings]
J: Ohh. Isn't that true Steve?
S: [Looking at his phone] It's very true, yes.
J: Do you keep your phone on when you go to the cinema as well?
S: [Fiddling with phone] Annoying noise, yeah, sorry about that, thought it was off.
J: [Coughs] Anyway, yeah, we wanted to make a record that was less produced in a way - that was just the sound of us in a room playing - not like unplugged or anything like that but, erm, we wanted to leave more space in this record. I think in some of our other records, we've filled every single track on the multi-track up and then got another machine and filled that up and - that can work, but err - we just wanted it to have a bit more room to breathe this time. So I hope that we've managed to do that.

S: ...Our records have had layers before, you know, I think - and there's less of that - so it hones in on what things are about much quicker. And I think people listening to it can direct themselves towards the heart of the matter.
J: Yeah, there's not too many double meanings or things that. And, you know, you're right with the video we just wanted to make something that looked nice, which might seem a bit superfical, I don't know. But for me, I just thought it was time for us to do something that was more direct, and less, err, with less artiface to it, you know? It just seemed like the right thing to do at this time.