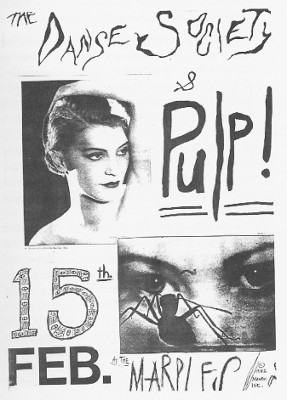 Pulp are a quite different proposition. While on the surface they may appear to be a more conventional group than Danse Society, in their own subtle way they kick far harder against the established rock mores. Danse Society are humourless and superficial. Pulp are funny and sincere. There's reason behind their lunacy. They ridicule the idea that pop music can have more than momentary impact, so pose tongue in cheek and take the piss, mainly from themselves. Singer Jarvis Cooker introduces songs in precisely the same tones of resigned existentialism as John Peel, but in their changing moods manages to scream lyrics with a manic and uncool devotion. In fact it was a bad night for Pulp. To appreciate their finer points and realise they're more than just another pop group one needs to observe at close range and hear the words, which was practically impossible in the prevailing atmosphere. Even so the audience loved them and demanded an encore. A Pulp LP would be wonderful though I don't know if anyone would buy it. Though 'trash' is their favourite word and disposability their creed I'd hate to think of Pulp remaining unknown only for somebody compiling an album of 80's trivia to rediscover them in the year 2000 and wonder why they weren't famous.

AT ONE time the word pulp was used to denote a type of cheap American fiction magazine, the term derived from the fact that the magazines were printed on low-grade recycled pulp paper. Nowadays the word Pulp denotes a wilfully eccentric five-piece pop group whose music generates a kind of fairground/carnival feel.

The members of Pulp are all good Yorkshire lads. Jarvis Cocker is the main man, tall and skinny (what the Yanks call 'rangy') with a poise reminiscent of Olive Oyl. The muscles of his brawny arms stand out like knots on cotton, as my dear old dad used to say. His credentials as a singer and guitarist are pretty much unimpeachable. I've just spent the best part of an hour watching him lead Pulp through their paces, an initially enjoyable but ultimately unfulfilling experience.

The songs were all brisk and sprightly, with lots of loopy melodies reminiscent of XTC, only not as irritating. I'm not going to play the old comparisons game cos that would be taking the easy way out. It's crass and lazy, a shortcut to original thought. Besides which, Pulp are tricky, hard to pin down.

Decent numbers included 'What Do You Say', allegedly the highlight of Des Moines' new 'Your Secret's Safe With Us' compilation, and the slow-burning 'How Could You'. Very nice stuff indeed. The unfortunate thing is that when I go to a concert, I often find my attention beginning to wander about two-thirds of the way through, and so it was with Pulp. They have a certain charm, it's true. But charm is a hard quality to pin down, and after a while I began to think of other things. (I couldn't help wondering, for instance, why the skinhead in front off me kept shouting, "Where's my emu?"). This may have been purely my fault, or it may have been due to some latent deficiency in Pulp's music. Either way, I never managed to regain my initial enthusiasm.

The Sheffield fanzine Pink Flag recently referred to Pulp as "Unpredictable, whacky, possible brilliant outsiders." I'm more inclined to think of them as the musical equivalent of a Milky Way bar, a band you can safely listen to without fear of ruining your appetite for something more substantial when the times comes.

Retrieved from https://pulpwiki.net/Pulp/Live15February1982MarplesSheffield
Page last modified on July 10, 2011, at 09:41 PM