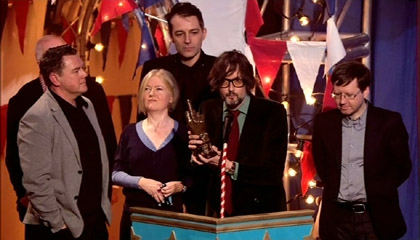 Thank you. Thank you Sir Peter - this isn't quite as pretty as the ones they had at the Brit Awards that you designed. And Adele wouldn't have had any problem, would she, you can't help but put the middle finger up with this one.

It's very nice to get this obviously - it's nice to get awards - but especially for us because we actually have had one of these before, err, we were trying to remember when we got it: sometime in the nineties, most of you were semen then. And the trouble was Nick took care of it, and some things happened during the night, and he turned up the next day and all that was left was the finger and the rest of it had disappeared. So we won't be giving it to Nick tonight to take care of.

I think we would like to dedicate this to all the people who came to see us last year when we played concerts. A concert without an audience is just a very long soundcheck, which isn't very interesting. We never had chance to say thank you - so thanks. And we played here as well - was anyone here, yeah? Yeah.

And we're going to play in a minute, but we should also say thank you to Rough Trade, our management, especially Jeannette Lee. And Jeff Craft our promoter. And, erm, have I forgotten anybody else? I'd like to dedicate it to Tim McCall as well, because without him we might not have played these concerts.

Alright, thank you, now we're going to disappear behind that curtain and make some noise.