PULP have splashed this strangely since 1979. That's 10 years of comic tension, a decade of bizarre normality. Pulp wear wing-collar shirts borrowed from "Man About The House". It all adds up to a curious pastiche or grotesque elevation of Northern Working Class Culture until keyboardist Candida drops us into "Don't You Want Me Any More?", an emphatic electro arabesque of early Eighties vintage. PULP recapture Sudden Sway's predilection for the florid and the sordid, the sublime and the gorblimey. Singer Jarvis is a classic post-Iggy crooner with a voice as lugubriously deadpan, as definitively Yorkshire as Oakey.

"Love Is Blind" is an off-kilter oddity that pursues tonight's plan of disruption, Jarvis straying into vocal territories previously inhabited by Gene Pitney, Jim Morrison and Jacques Brel. He looks like Richard O'Sullivan. Pulp tap into that Sheffield tradition of ABC, Human League, Heaven 17, organisations that spike their perfect pop confections with something awkward or eccentric. But Pulp's intellectual packaging does not prevent them from jangling our synapses. "Separation" is a lonesome spine-tickler that eschews ironic detachment in a direct bid for the tear-ducts.

"Rattlesnake" is a dotty polka-and-ballalaikas shuffle that conveniently disinters "Rasputin" now that Bjork reckons we can shimmy to Boney M again. "Death Comes To Town" puts the hardest hearts into the liquidiser, a sincerely sorrowful lament. "Legendary Girlfriend" is revelatory dance-rock fever while "This House Is Condemned" is a hectic Acid jackhammer as DAF-t as Nitzer, with a restless synth-riff as rivetting as "Can You Party?" No joke. Pulp is everything. 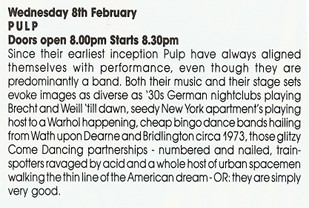 Retrieved from https://pulpwiki.net/Pulp/Live8February1989TheLeadmillSheffield
Page last modified on October 27, 2020, at 05:08 AM