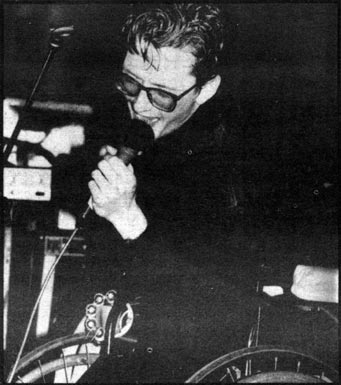 This concert was played with Jarvis in a wheelchair. He had fallen out of a window breaking his pelvis and other bones the previous November.

A SMALL coach party on a Sheffield day out. And as exiles and day trippers reminisce and boast, some lobotomised half wit insists upon explaining just why something called 't'Wednesday' are to usurp Liverpool's rightful place as the best football team ever.

Coincidentally, Dig Vis Drill are perhaps the best pure racket band ever. I'm still not sure if I like them, but if I gauge their moods correctly then they are sharp and acidic and angry. Politics, wow!

Pulp were once a fine and sensitive coupling of emotion and construction. Then they became, it says here, a Thrash Band. At present they lie somewhere between the two. And those shades of frantic sub-Velveteen violence which have extended into this incarnation tend only to detract from the positive effect of their assertive yet restrained creativity.

Jarvis Cocker fulfils the Morrissey handicap gambit by remaining in his wheelchair throughout, while about him Pulp contrive a succession of interesting textures. Pulp is, as my live-in dental consultant informs me, the soft centre of nerve beneath the hard enamel surface of the tooth. The analogy fits.

Retrieved from https://pulpwiki.net/Pulp/Live9January1986TheClarendonLondon
Page last modified on November 12, 2011, at 11:41 PM