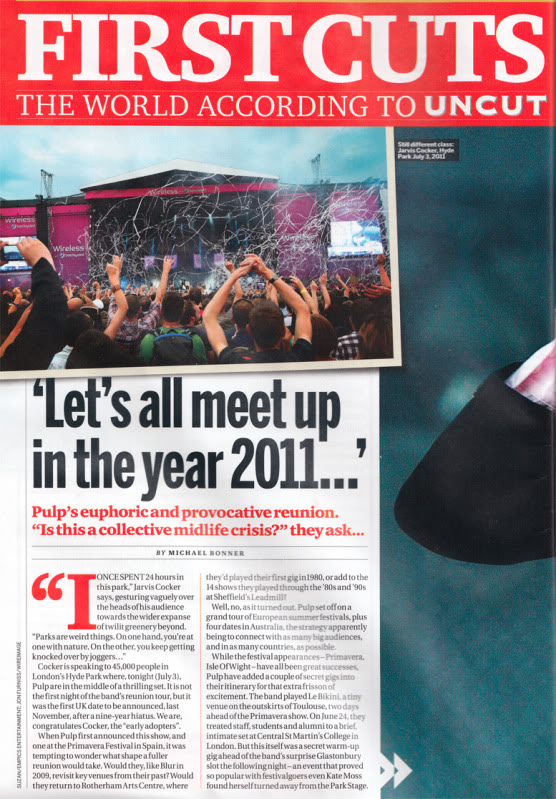 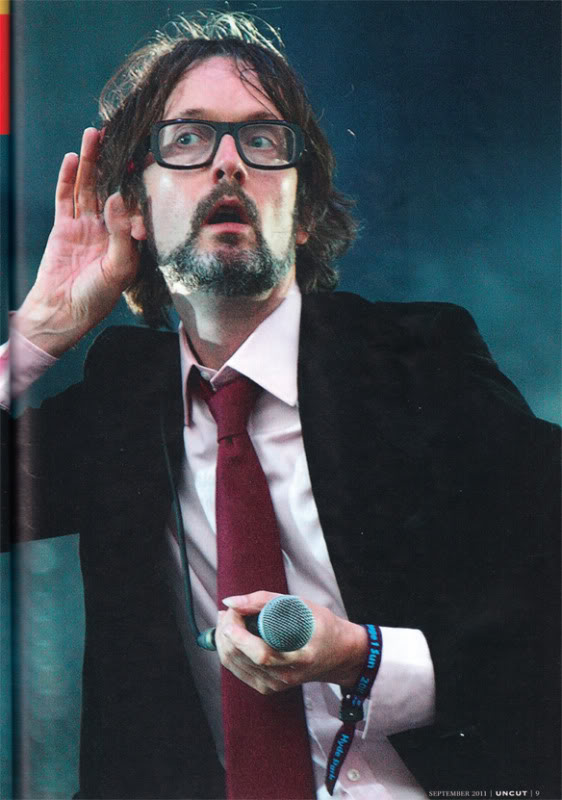 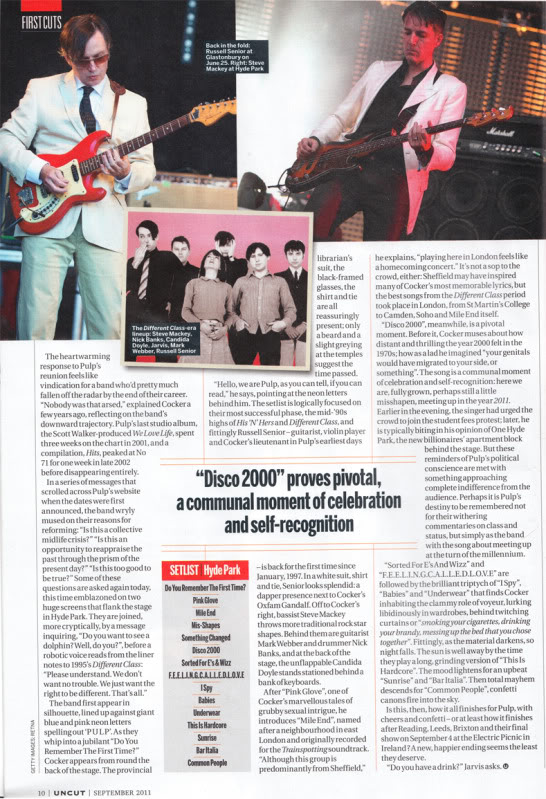 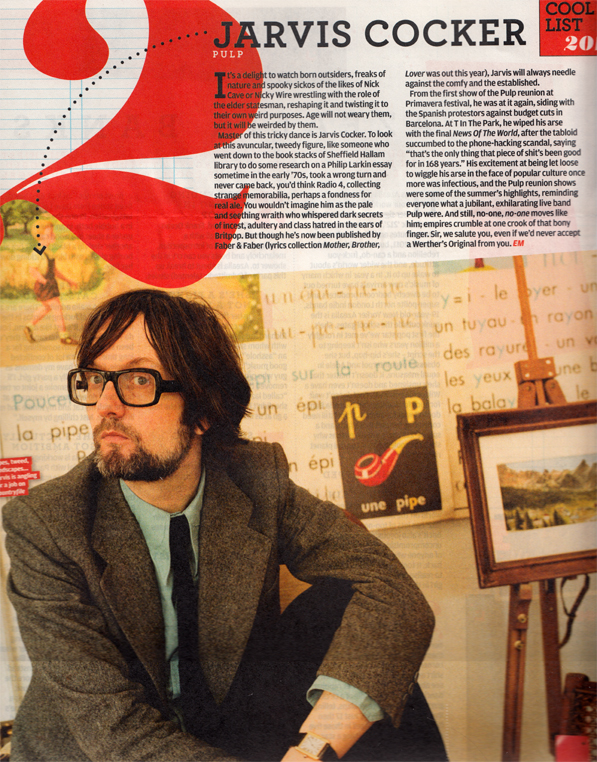 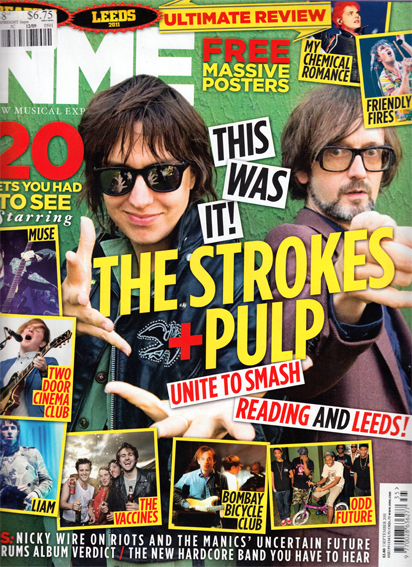 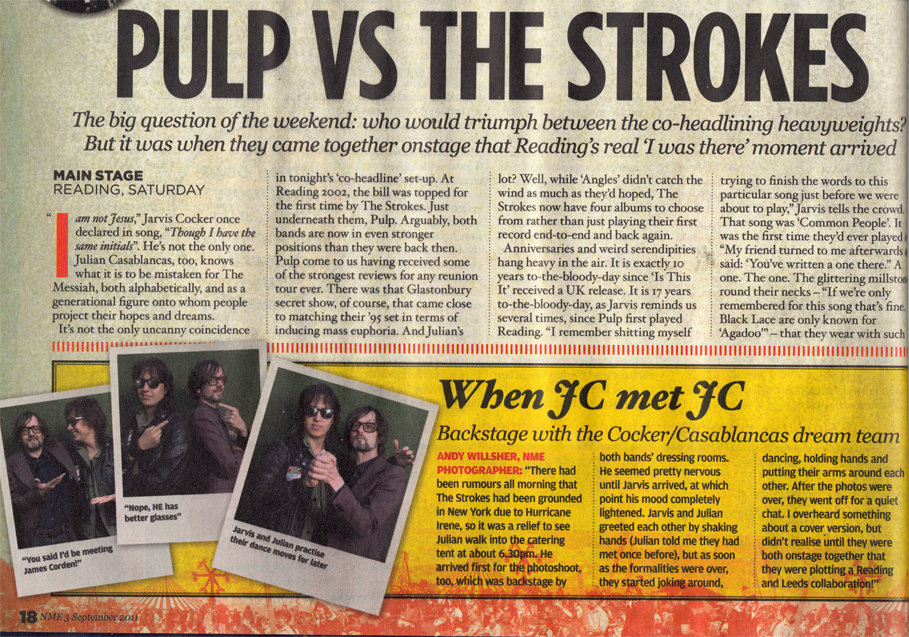 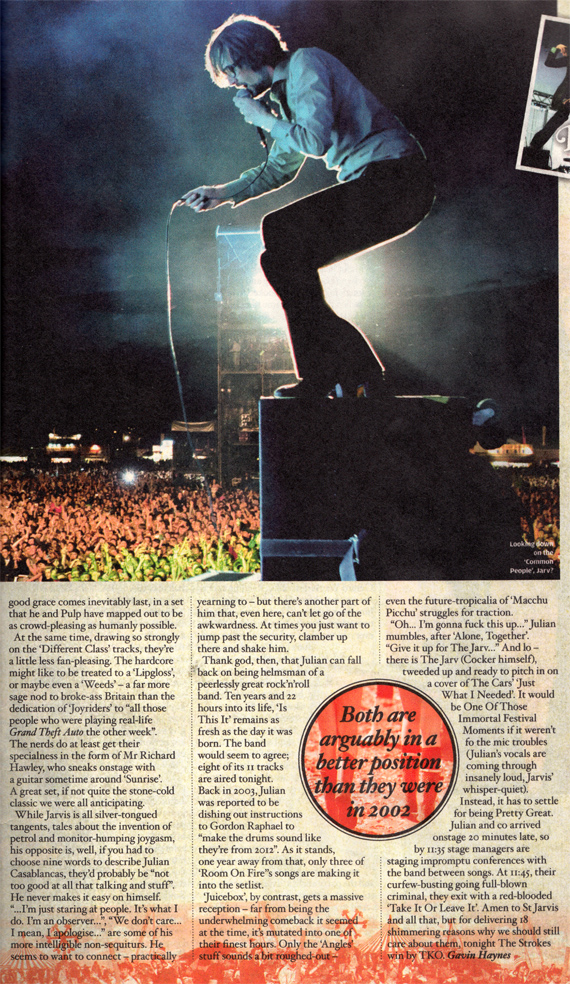 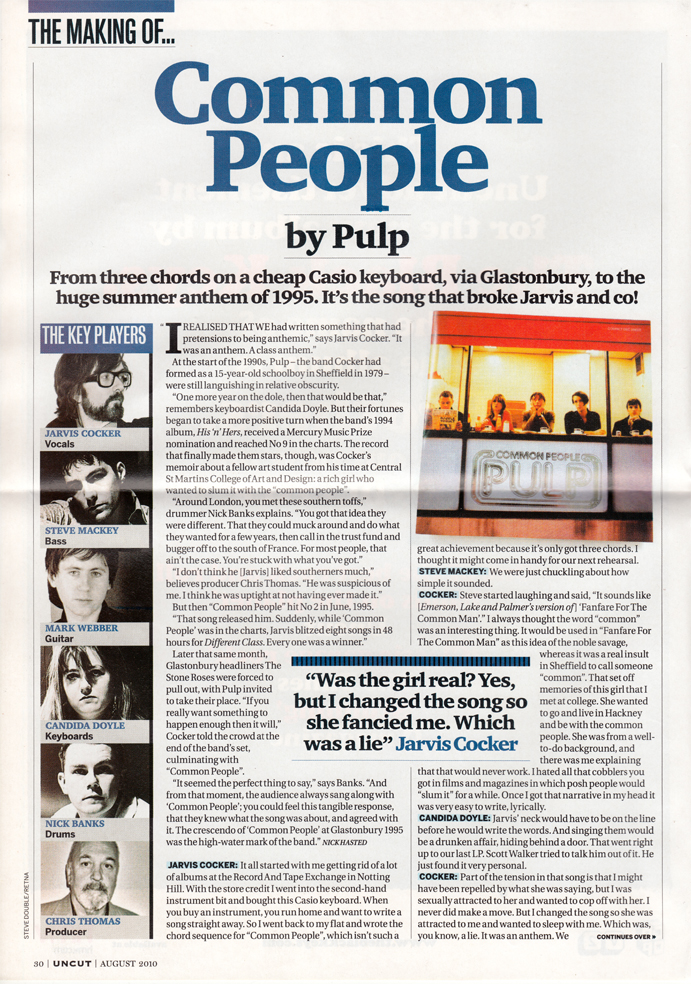 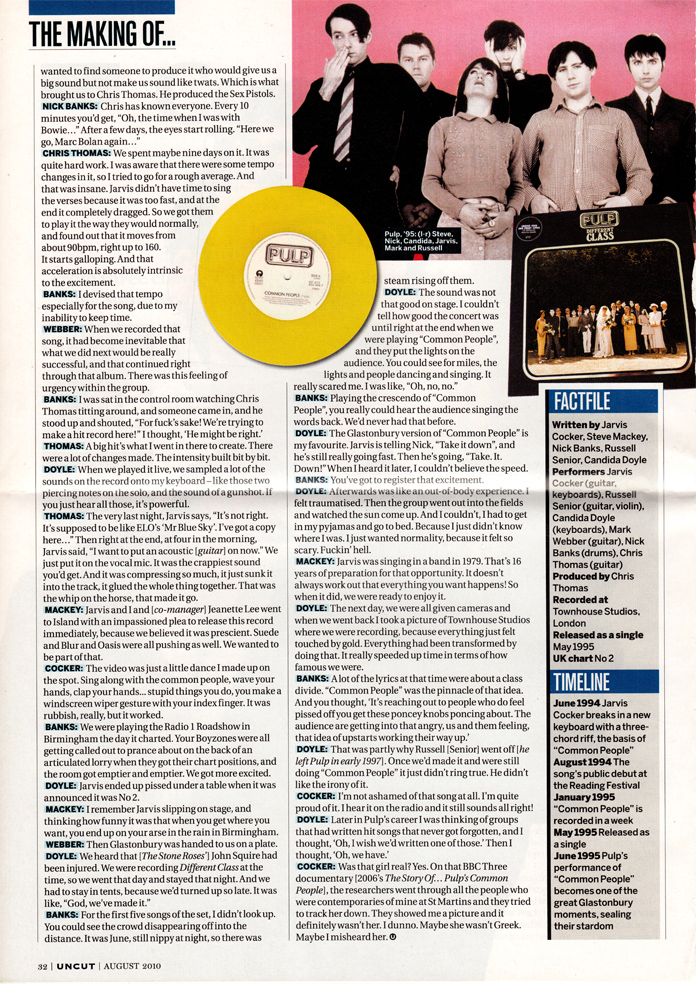 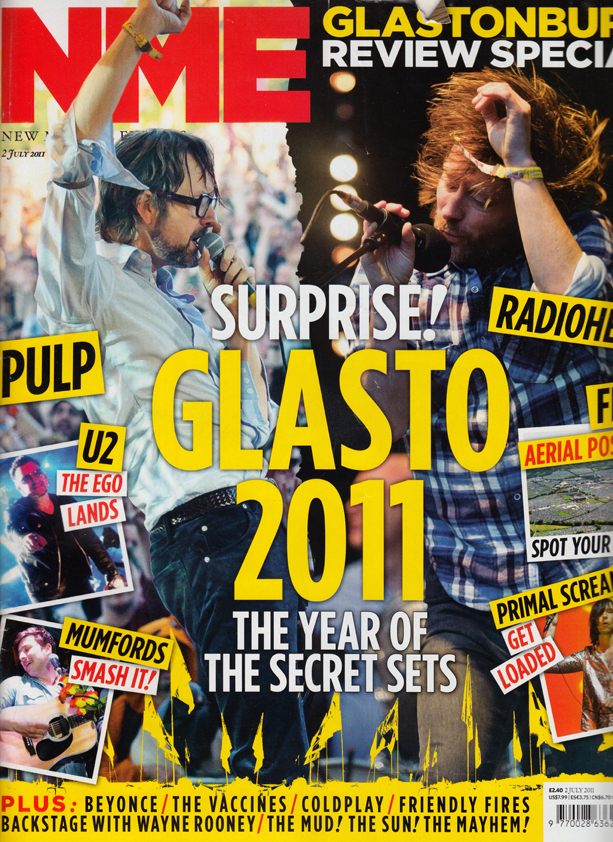 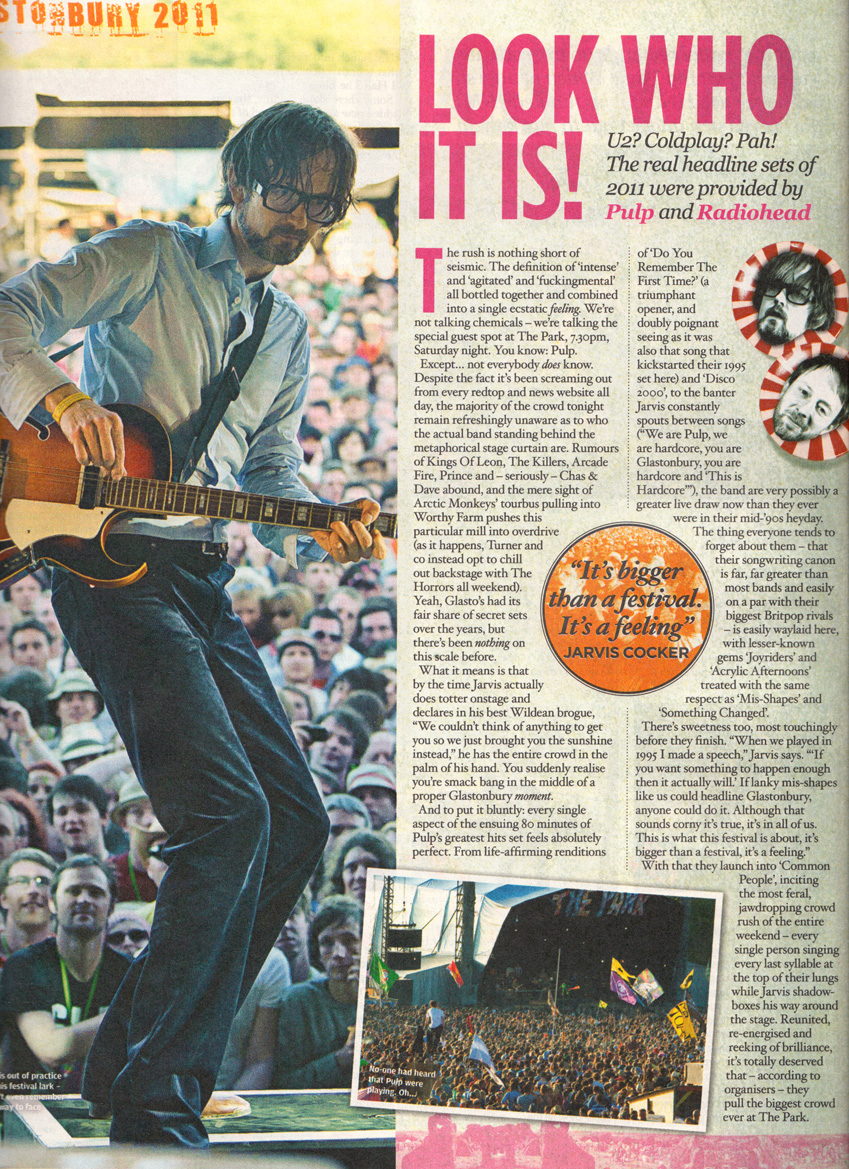 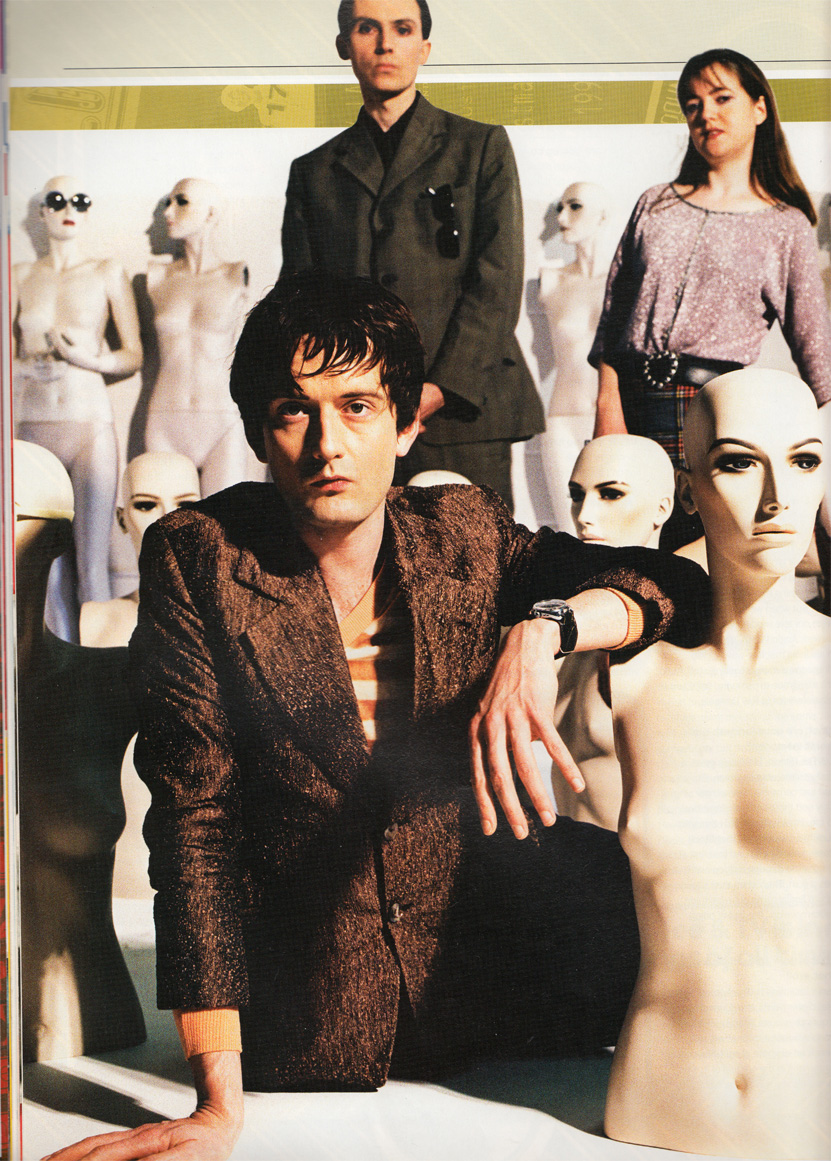 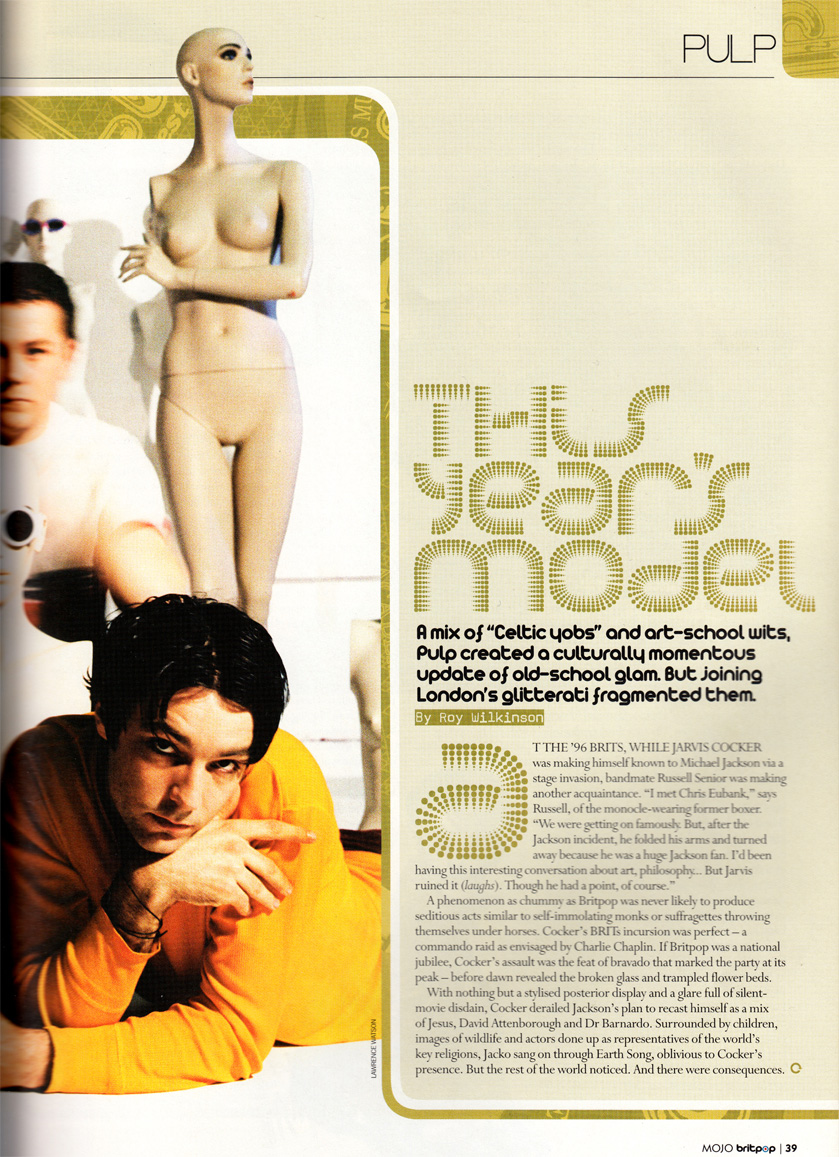 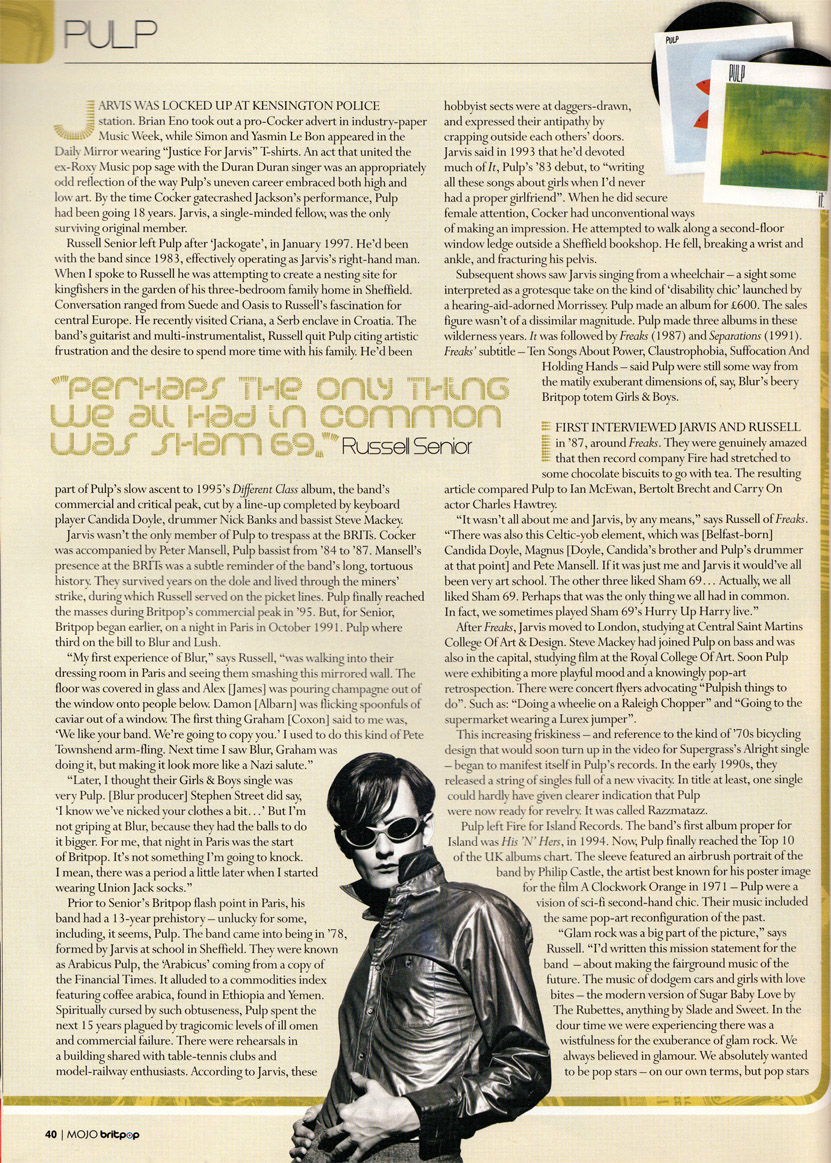 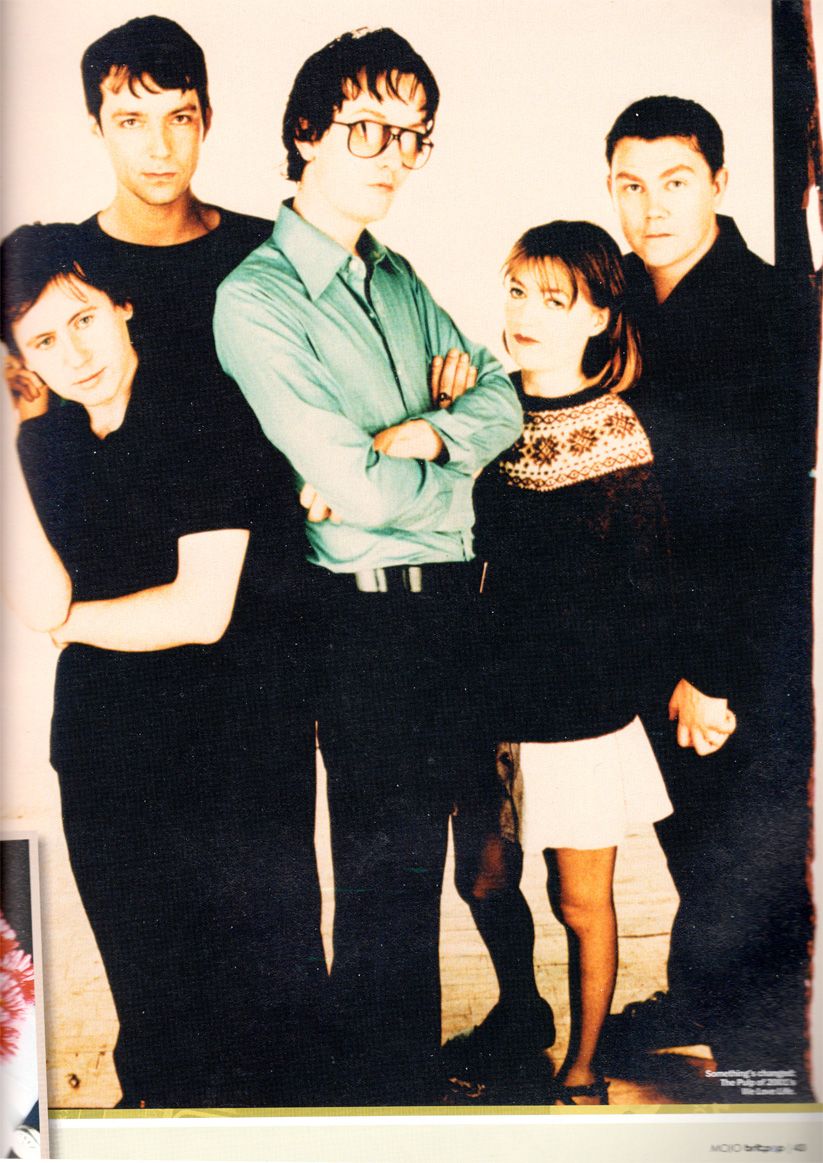 Isn’t it funny that there’s a word for as specific a misfortune as defenestration, but no equally succinct term for having grown up poor but intelligent; aware of the options available to others, but denied the same ambitions. You’d think the former a smaller niche than the latter, but English doesn’t afford it a discrete word. There’s probably a German compound word that nails it.

That failing of language was just as well for Pulp; spinning that idea out to song length put the group on the crest of the Britpop wave in 1995. Standing in for The Stone Roses as Glastonbury headliners, it’s hard to imagine how surreal it would have been for Pulp after years of middling success, odd jobs and the dole, seeing thousands upon thousands of people going ape over ‘Common People’; singing their words back to them – the ones about “watching your life slide out of view.” Hell, it gets weirder – around that time, it was possible to buy (buy!) ‘I’m Common’ merchandise. Hysterical.

And all the moreso because, prior to the Glastonbury victory, fame had long eluded the band. Lead singer, unlikely sex symbol and sole original member Jarvis Cocker had formed (then) Arabacus Pulp with a high school classmate all the way back in 1978. But despite an early break playing John Peel’s radio show in 1981, the ensuing decade didn’t smile on the group. Members came and went, records sold poorly, and for a while in the late ‘80s, the band called it quits, the lineup dispersing to pursue studies and dead-end jobs.

That said, it’s hard to entirely blame the listening public; Pulp’s early albums were pretty hit and miss. It (1982) was Leonard Cohen-inspired folk, Freaks (1987) humourlessly and unconvincingly dark, while Separations (1989) dabbled in acid house (I swear I’m not making this up). Which isn’t to say there weren’t highlights. ‘Wishful Thinking’ (from It), was an early hint at Pulp’s future aesthetic; plaintive and sexually frustrated, it’s the sort of post-coital hangover song that would have fit among the more downbeat songs on Pulp’s eventual hit album, Different Class. But then who’d have thunk kitchen sink eroticism a recipe for success?

Poorly-received albums weren’t Pulp’s only misfortunes. In 1985, Cocker fell through a window at a party while performing a (presumably unsuccessful) Spiderman impression, leaving him wheelchair-bound for months. Overnight success indeed. But perhaps ironically, it was Pulp’s very lack of headway, as well as some fortuitous timing, that eventually gave them their break in the early ‘90s. Notoriously elusive to the media of late, Cocker and bassist Steve Mackey did reminisce about the past in a recent interview with the BBC’s Steve Lamacq: “Towards the end of being at college, we just started playing a few shows and things started to happen,” Jarvis said. Added Mackey: “[It was a case of] not trying as hard, ‘cos things weren’t going so well, Jarvis had come to London to try and do something else; we didn’t really expect anyone to come and watch us.”

This newfound relaxation may not have immediately produced a recognisably “Pulp” sound, but it did, thankfully, mean ditching the acid house and finding material a little closer to home. The group’s first inklings of success came with favourable press for the singles ‘My Legendary Girlfriend’ and ‘Countdown’ in 1991. Sonically, ‘Countdown’ may have sounded like disco via Joy Division – check out the hilarious video featuring a short-haired Cocker channeling Ian Curtis – but tellingly, both songs found Jarvis’ lyrics starting to draw overtly on his background as a bookish, if perverse, misfit from working class Sheffield. It was a direction that foreshadowed Pulp’s future career as producers of slightly kinky tales of underprivilege; something that a resurgent British music scene would turn out to have an appetite for. As Mackey put it in the Lamacq interview, “The thing you need sometimes in a band is a bit of luck. There’s loads of bands making great music, but people just don’t catch them at the right time. Suddenly grunge died … people seemed interested in British music again and we just happened to have a record around.”

That record was 1994’s excellent His ‘n’ Hers, and the singles that preceded it were ‘Babies’, ‘Lipgloss’ and ‘Do You Remember The First Time?’. ’Babies’ in particular marked the point at which Pulp became musically and lyrically cohesive. It may have dealt with voyeuristic suburban longing, but rather than a mopey dirge or outright sleaze, the track was musically ebullient, and lyrically, intensely confident… in a roundabout way. Cocker’s stand-in protagonist even got laid – “I only went with her ‘cause she looked like you” – albeit by the wrong girl.

There’s a great line from Loaded editor James Brown in the doco Live Forever that pretty much sums up Britpop: “Confidence was something that in the past we’d left to Americans, [but suddenly] it just seemed like all of those sentences, all of those discussions you’d ever had – wouldn’t it be great if? – well that’s what happened in the ‘90s: if happened.” And what better encapsulation of that than Jarvis Cocker’s council flat lothario persona getting his end away? Than the far-from-conventionally-attractive singer becoming a sex symbol himself? For a couple of years after that, it seemed all the band’s tracks were about dorks getting laid and the small triumphs of dweebs, oddballs, the working poor and the dole; all shot through with Jarvis’ characteristically English, and increasingly cocksure, wit. Unsurprisingly, given the musical and cultural climate, they sold big. His ‘n’ Hers was, by Pulp’s standards, massive; ‘Common People’, Glastonbury, and their next album, 1995’s massively successful Different Class, were huge by anyone’s.

Which, as it turned out, wasn’t the blessing it must have seemed in Pulp’s leaner years. Cocker in particular was ill-equipped to deal with fame, or the mountains of coke that lent Britpop much of its ballyhooed confidence. As a celebrity, he made for a fine spectacle – probably the best being his arrest for storming Michael Jackson’s messianic performance at the 1996 BRIT awards – but personally, fame took its toll. Jarvis recounted later (again, in Live Forever): “You don’t often hear people say, ‘Oh, since he’s been taking them drugs, he’s such a nice person! He’s really come out of his shell.’” Previously charming on stage, in concert he sometimes sounded like he belonged in Oasis rather than a band known for their wit – “turn the fookin’ sound up on the stage, we’re tryin’ to get a fookin’ vibe going here, for fook’s sake” – and the rest of the band had their own problems. Long-time guitarist/violinist Russell Senior left in 1997 due to “creative differences”, and to escape the lifestyle that success had afforded the group. Not long afterwards, Cocker suffered a nervous breakdown upon return from a “rest trip” to New York.

If there was a silver lining, it was that rampant drug abuse and psychological trauma often make for great hangover albums. 1998’s This Is Hardcore baffled fans looking for more triumph-of-the-underdog anthems and sold poorly, but in hindsight it stands alongside His ‘n’ Hers as one of Pulp’s best releases. In the same way that their success in the 90s reflected Britpop’s rise, Hardcore mirrored its wane (Be Here Now had shat onto shelves the previous year). The songs were major downers – but what downers. The title track was as good a tune as ever came out of Cocker’s obsession with sex, while ‘The Fear’, ‘Dishes’, and ‘Help The Aged’ all showcased the band’s increasing sophistication, if not a chipper mood (Ali G Show performance notwithstanding).

But This is Hardcore left Pulp with little ground to cover. No longer in any position to claim being common, and having vented their post-fame neuroses to minimal sales, the group ultimately had only one more release in them. 2001’s We Love Life wasn’t bad by any stretch; much more relaxed and upbeat than Hardcore (in so far as tracks about refugees and assault can be), it also boasted one of Cocker’s finest sprawling, semi-spoken word epics, ‘Wickerman’. But Life nevertheless felt thematically empty. Pastoral imagery and resignation took the place of prole triumph, immediate dread or believably fervent invective. As enjoyable as the album was, it sounded like a band that had run their course, and Pulp went “on hiatus” a couple of years later.

At least until now. Reunited, if not necessarily resurgent, Pulp are adamant that no new albums are forthcoming – but they’ve been playing shows again over the last six months, and are coming to Splendour In The Grass and little old Sydney. Which, despite how things fizzled out for the band in the end, is pretty fucking exciting. Listing back over their catalogue, the songs have aged remarkably well – more so than most of Pulp’s peers – and it’s a rare affluent poseur who can, even now, resist shaking their arse to ‘Common People’. 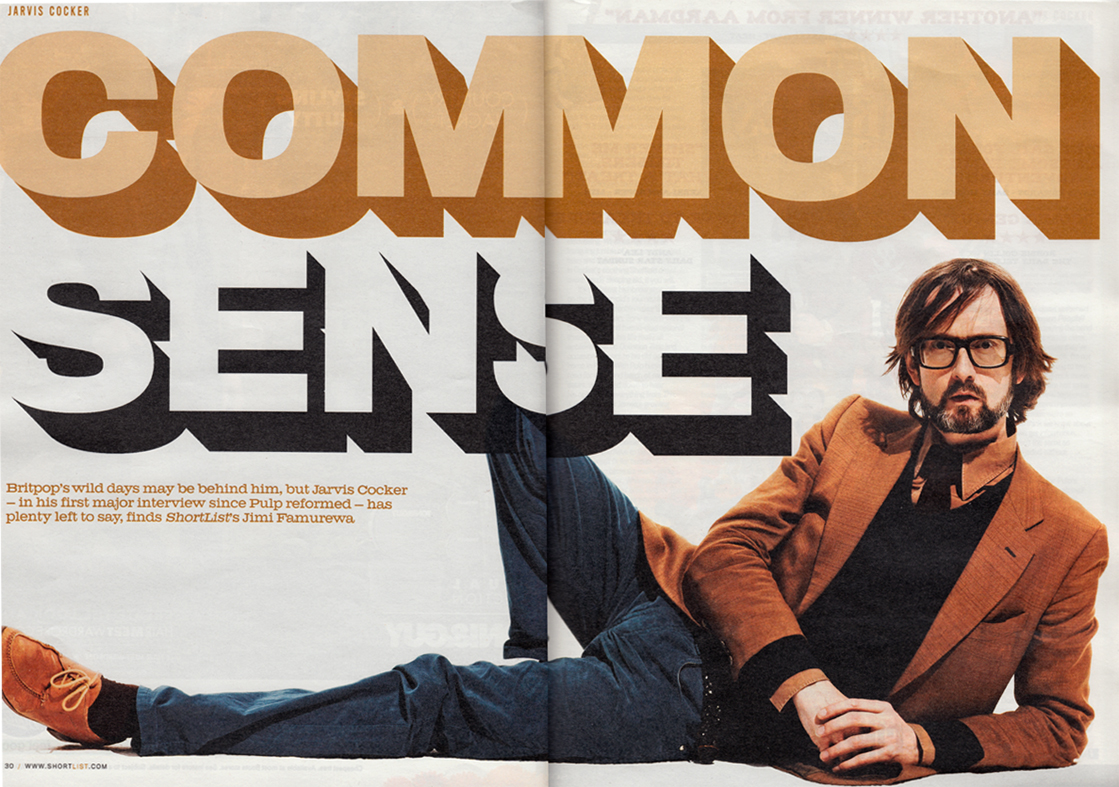 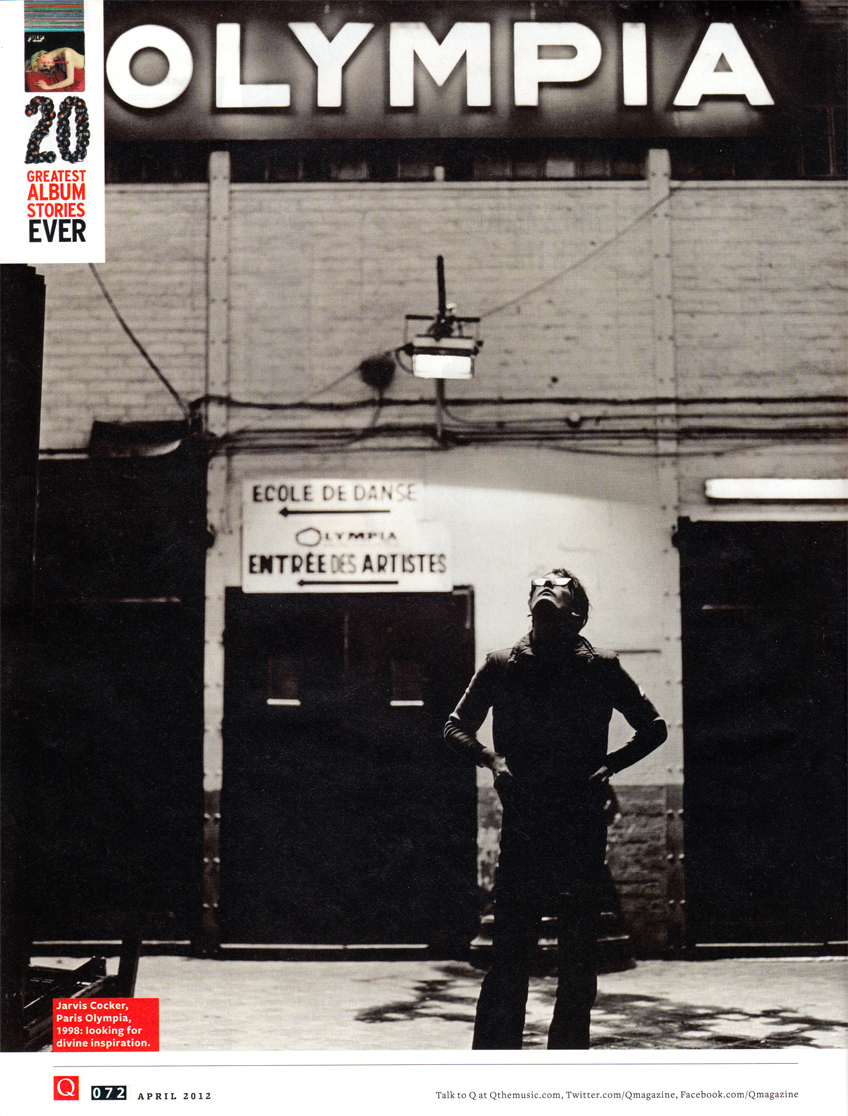