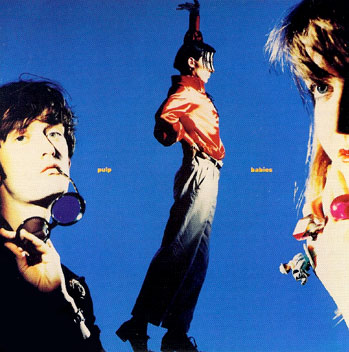 Babies is a song and single by British rock group Pulp. It was released as a single for Gift Records in 1992, and was later remixed for The Sisters EP in 1994. The remixed version featured on the His 'n' Hers album and the original single mix on the Intro compilation. The song failed to chart in 1992, But became a Top 20 hit when re-released in 1994, peaking at #19 on the UK Singles Chart.

Babies:
Yes it happened years ago on some damp, acrylic afternoon. I know you got your own back years later (that's another story) but it wasn't such a big deal anyway - in those days you packed people rather than divorced them. I liked it that way and still do, but then again I'm imma.

Styloroc (Nites Of Suburbia):
Happening in a cul-de-sac near you.

Sheffield: Sex City:
The morning after My Legendary Girlfriend. Trying to get things done but ending up on a tour round the fleshpots of Sheffield in a T-reg Chevette. Wybourn, Brincliffe, Intake - All these places really exist and maybe these adventures still happen there - I wouldn't know; I don't live there anymore.

Island records were interested, and the next single, "Babies", was recorded in the Fallout Shelter, underneath Island's Chiswick head office. "Styloroc" was taken from demos we'd done earlier for Island. I tried to sing along with it, but it sounded like Whitesnake, so I recycled some lyrics from an old song that never got recorded, "Nights Of Suburbia" and recited them over the top of this stylophone music.

"Sheffield: Sex City" was a bit off-the-cuff - the Sheffield place names at the beginning weren't planned. One of those little moments of magic! I started writing more about Sheffield once I'd moved away. There was an instrumental version on the CD, a bit of atmospheric, moody music - it'd be good to make love to, because it's quite long. It's not a good idea to make love to records with words because it seems someone's in the room, making a comment on what you're doing. I must say I've never had sex to it myself - I don't have sex to my own records. But I don't mind other people doing it, in fact I receive many letters from people who do.

This is my first taste of Pulp, the reputedly bizarre northern glamsters, and I'm astonished by the force of their desire to soar, to grasp at something monumental. Everywhere you turn, all manner of things are bursting to get out. Jarvis Cocker's fly buttons are under particularly excruciating pressure, if these urgent, hungry, wonderful songs are anything to go by.

The whole affair revels in a kind of budget magnificence, as if it's a blueprint for an epic to be constructed in a more liquid future. String arrangements are sketched in by organs and synths, and, in lieu of the Royal Albert Hall, Jarvis' stately, lubricious baritone has to make do with a deep-throat echo chamber. These restraints and substitutes are Pulp's greatest strength, the source of their appeal. In overcoming them, they produce music of unique grandeur.

Cud die! Sheffield's Pulp are the kings of Lion Pop (whatever that is). Not yet signed to a major, but, reassuringly, still peeping out of the wardrobe of their best friend's older sister. This jogging last-of-the-summer-wine single sees singer Jarvis apologising for an imagined (we hope) boyhood affair. It's sad, it's seedy, it's splendid. And I haven't even mentioned the B-side, 'Sheffield Sex City', which will ensure that your palms are damp until Christmas.

G: I thought that was great. I love the cheesiness of it, he's like a camp C&W singer. It sounds really original doesn't it?
Yeah, but it's weird because they epitomise and revitalise the naff '70s. Did you hate it, Clint?
C: Didn't particularly hate it, I dunno. I mean I had no idea that they were camping anything up from that record. There is a wacky feel but perhaps you have to see them live. I can't say yay or nay to that really.
G: A difference of opinion, Geoffrey, press your buttons and gamble away.

Aaagh - Pulp have got one too! Wasn't this instrument, eminently capable of producing squelchy sounds akin to the massively amplified tread of a shoe in dog turd, banished years ago? Maybe, but it's back, and mercifully used sparingly on 'Babies', glooping away behind the bouyant, laconic guitar strum as Jarvis Cocker shapes a wordy tale of desire, sexual intrigue and procreation that falls a notch below a French trousers-down farce. These traits crop up again on the lengthy 'Sheffield Sex City', where his role of poet/ranconteur smacks of Momus at his most over-verbose. And speak of the devil...

Retrieved from https://pulpwiki.net/Pulp/BabiesSingle
Page last modified on November 12, 2011, at 11:51 PM