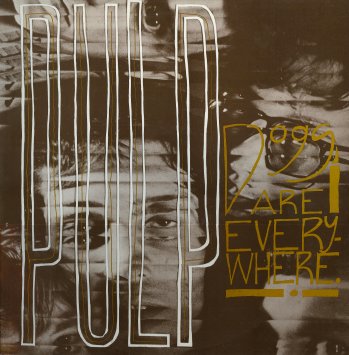 Dogs Are Everywhere is a non-album single released in 1986. The title song is a soft ballad reminiscent of the band's first album It, but the B-sides have a much darker sound closer to the band's next album Freaks. All of the songs are included on the compilation album Masters of the Universe.

Dogs Are Everywhere.
Recent evidence shows that man is a direct descendant of the Dog, rather than the ape, as had been believed. Some are closer to their roots than others.

The Mark of the Devil.
A disease that can strike at any age. How it is caught is a mystery but when one day you look in the mirror and see that mark upon your face... It's a sickener.

97 Lovers.
Why 97? It could just have easily been 970 or 9,700. Just take a short walk around town and you soon lose count of the deformities. By the way, what's that growing on your back?

Aborigine.
A real kitchen-sink drama. This kind of thing happens all the time, and it leaves a nasty stain on the shag-pile.

Cocker to-day is for all practical purposes a pet and a show dog.

Three days before "Little Girl" came out, I fell out of the window and was in hospital for two months. I'd done me hip and me ankle and me wrist. I had to use a wheelchair on stage because we'd had concerts booked. Anyway, I got my mum to bring in a keyboard and I wrote "Dogs Are Everywhere", inspired by one night after playing in Chesterfield. Magnus and Pete were always pissing about and getting stoned. Myself and Russell were puritanical and thought that was terrible. They'd have these mates hanging around, which got on my nerves. That night, they nicked bottles of beer from behind the bar, and we got into loads of trouble. That's what "Dogs Are Everywhere" is about - people who display a doggish attitude.
It's got five tracks - good value, that E.P. "Mark Of The Devil" is not a good recording but I thought that was our best song. I'd decided disco was the thing to go for, because I was sick of the over-the-top emotional business. Giorgio Moroder didn't have any emotion: it was robot music. I was intrigued with the idea of that beat and style but with something emotional over the top. The chord structure of "97 Lovers" got recycled for "O.U." years later. That was the first time I got some good lyrics out. One bit was about my auntie - in her bedroom, she had a picture of Roger Moore above the bed, with this short towel and dressing gown. I always thought, God, I bet it's weird when they're in bed having it off underneath that picture. My uncle must know she's probably thinking it's Roger whilst he's doing it to her.
"Aborigine" was so called because it sounded like aboriginal music. It's not a digereedoo, it's Russell playing low notes with a violin bow on a bass, and it's got a very primitive beat. That's about a bloke who's always kidding himself his life's about to start, and become exciting, but ends up wasting his time and becoming very fat. "Goodnight" was a concept piece that sounded like falling asleep. Then I had to spoil it by having some nightmare part at the end - that's the impetuousness of youth for you. "Dogs Are Everywhere" got 'single of the week' in 'Melody Maker'.

PULP are very English, highly-eccentric and one of the most funny peculiar bands I've ever heard. This is their second single of the week, awarded for no other reason than the fact that his band please me intensely. Jive to the warped sense of humour, thrill to the insanities of their subject matter, have a laugh with Jarvis who looks like an undertaker's apprentice and sounds like a heavenly choir... thrill to the perverse logic of their lyrical adventures. Profound, that's what I call it. Once you've heard Pulp you'll Never need The Smiths again: Pulp are probably the most subversively important band in the world today and they don't even know it.
"Dogs" is very funny in an acoustic, whimsical vein with Jarvis' vocals hilarious in their droll perfection. 'The Mark Of The Devil" goes one step beyond with an acutely angled lyrical twist - how's this for a perfect line? "And your past is just a bedroom full of implements of cruelty" — with Jarvis' showmanship and the dervish intensity of a stolen Bavarian folk dance. Pulp make their music so compulsively unusual and spellbindingly attractive that it just wouldn't be fair not to want to share it with you. An odd one but a certified goodie.

Sheffield band Pulp are releasing 'Dogs are Everywhere' — their new 5-track EP — in late May.

On first play I formed a suspicion that Pulp are the sort of band who are most effective when playing live. Second play convinced me of this. However the recording does have its good points.

Pulp seem to specialise in out of the ordinary lyrics and 'Dogs are Everywhere', the title track, conforms to this rule. To begin with the words can only be described as plain silly: 'Dogs are everywhere, almost everywhere, that I go". But things do seem to get more profound later on in the song. This convinced me that Pulp are definitely trying to make a statement about something. Make your own mind up: 'They always wag their tails at all the pretty girls and older women. They find their own way then they rip up everything that I believe in.' A cryptic reference to the thugs in suits brigade, or the clientele of The Stonehouse and Roxy's perhaps?!

The actual music of 'Dogs are Everywhere' is almost hidden behind the vocal, which is a shame because there is a very definite melody there. This makes this track distinct from most of the others.

'Aborigini' is the track which is most distinct from 'Dogs are Everywhere'. It is also the only track which made me reach for the stop button. The music slugs along at the same pace for most of the track, speeding up only at the end. At which point the vocal turns into a John Lydon style chant. It is a shame that the music cannot match the depth of that produced by PIL. 'Aborigini' never really gets off the ground.

In my opinion the best track on the EP is 'Mark of the Devil'. It is also the most danceable even though tempo does go through some rapid changes. Again the vocal is very forward but the music supports it very well. The sound of strings, also in the foreground, lifts this track above the rest. They make it sound different from the 'John Peel Show stereotype' music that the rest of the EP falls into without much difficulty.

The others two tracks are '97 Lovers' and 'Goodnight'.

The beginning of '97 Lovers' is reminiscent of an organist tuning up before a church service. The song itself stretches the singer's voice to the limit. However '97 Lovers' does have a saving grace — the words. They are colourful, vivid and at times quite funny: 'I know a woman, with a picture of Roger Moore, in a short-towelling dressing gown, pinned to her bedroom wall. She married a man, who worked on a building site, and now they make love beneath Roger, every Friday night".

'Goodnight' is the final track. It starts off well and has a ring of the early Cocteau Twins about it. It was just beginning to get interesting — sinister laughter appeared in the background — when the tape finished. So there is not much more that can be said about it, except that on first listen it was very much the same as '97 Lovers', having the same sort of sound and an almost identical structure.

The release of 'Dogs are Everywhere' should coincide with Pulp's Spring tour. A total of five dates are being played, two of them are in Sheffield. They are: Sheffield Maze Bar at the University — Tuesday April 29) and The Limit — Tuesday May 13.

Most of the songs on the EP seemed to indicate that the band could whip up quite an atmosphere on stage — so go and see them. Also see if they actually live up to their name — the dictionary defines 'pulp' as being 'a soft, moist, formless mass'.

Pulp understands the difference between passion and bombast, at least on their 12-inch EP "Dogs Are Everywhere." They're one of those minor league British indie bands that has never produced records of consequence. Their music is every bit as arty as Cave aspires to be, and their vocals are in that deep, dark cellar obligatory for early '80s underground bands. But there's something spooky to their surreal lyrics and bagpipe-inspired keyboard: "97 Lovers" is the tale of a black-widow human who does something dark and deathly to her used males. The Hitchcocks could take credit as an influence, Robyn for its twistedly calm, slow delivery, and Alfred for the story line. "Aborigine" is a monotone-voiced dirge over what sounds like bamboo stick percussion. The track builds with sinister synth and chunky slathers of guitar. It too is a tale of matrimonial murder, but unlike the stories on Pricks, the songs on "Dogs" are so tense and involving that listening to them leaves you exhausted. Which is the point of passion, if not the point of rock. Listeners who like Bauhaus and Cave and Hitchcock's twisted tales are likely to like Pulp's sinister ballads and even more sinister breathing. You can get more information by writing Pulp at 31 Flockton Court, Sheffield, S1 UK.

Not so much left of centre as almost off the wall, Sheffield's Pulp play pop, on 'Dogs Are Everywhere' (Fire), which resounds with the ambiguity and wit that's so glaringly absent from Suzanne Vega type songs. While never being the pertect pop artetact, this five track EP exudes a sense of mystery which is made all the more enticing by Pulp's tendency to mix moments of stark musical morbidity with staggeringly ridiculous lyrics.

[Rough translation]
Beautiful pop ballad that swims against the tide. Should say: not modern smooth finish, but with lots of good ingredients (instrumentation), 60s and 70s influences with exciting harmonies. Very good indeed!

Retrieved from https://pulpwiki.net/Pulp/DogsAreEverywhereSingle
Page last modified on November 12, 2011, at 11:43 PM