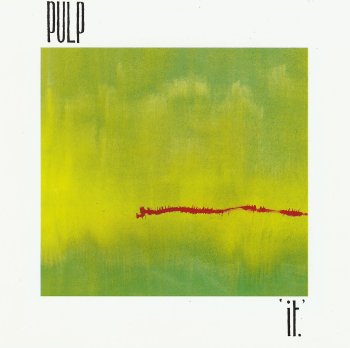 The It mini-LP is the first record that Pulp released. It came out in April 1983 on Red Rhino Records. This original vinyl release was given a limited pressing of 2000 copies. The name comes from combining 'Pulp' and 'It' to make pulpit - the idea of preaching to people.

In February 1994, It was re-released on CD by Cherry Red, with three bonus tracks (Looking For Life, Everybody's Problem and There Was...). However, on release, it transpired that Cherry Red did not in fact own the rights to the album and it was immediately deleted. Only a few copies made it into circulation, which are today very rare.

The rights to the album were actually owned by Fire Records who put out another reissue in October 1994. The only bonus track this time was Looking For Life because Cherry Red still had the rights to Everybody's Problem and There Was...

I remember this record as though it was only yesterday. I'd just left school and Tony Perrin, who later went on to manage The Mission, decided to put up the money for recording it. We did it in a very strange studio in Sheffield that only had about three microphones, but the man who owned the studio told us that one of the microphones used to belong to Cliff Richard and insisted on recording everything with the Cliff Richard microphone. I listened to it recently, because I got a copy of this CD thing that was released by Cherry Red, and I think it's quite a decent record - although I must admit that it does embarrass me slightly. I was still a virgin when I did it, and I think that you can really tell because I've got a very idealised view of love and romance which was to change rather radically over the course of the next few years.

Before this, when we'd only done a John Peel session, Pulp had been brasher and poppier. Then all the people who were in the group went off to university and I got involved with Simon Hinkler [of local band Artery and, later, The Mission]. I thought I was going to be famous by about 17 or 18 because of Peel; I thought we'd automatically get a record deal and we didn't. [Simon] used to help me arrange my songs.

It was an attempt to create the sound of Leonard Cohen: having the drums as quiet as possible without actually being inaudible, and the distant female backing singers and a lot of acoustic guitar - a complete rip-off, basically. The only people who wanted it were Red Rhino. I was so excited to get the record, I placed it at the front of the rack and stood in different parts of the room to see what it looked like. But it caused very little excitement in the musical world.

Only two reviews from when It was first released are known: A positive one in Sounds and a very bad one in the NME.

A BRAVE attempt to make this year's cult album, 'It' finally fails because it puts style above content.

The four stars are there as a sign of how close the attempt came to being successful and how much worth there still is in 'It' to be sought out by late night soft-rock local radio stations and, if they want a hit, by big record companies with the suss to take over 'It' and make it into a hit album.

That dreadful title on what is almost a remarkable album seems to tell the central tale. Pulp - from Sheffield and seemingly the guise for one person, Jarvis Cocker — go so far to successfully recreate and, more importantly, overtake the soft rock of a Simon And Garfunkel or a Mamas And Papas (same production) or, at their best, a Crazy Horse - but so far only.

Twenty-per-cent of the Pulp album is full of mistakes; if that had been just ten-per-cent, say, those mistakes could have been seen as the flaws necessary to a classic. It's that close a contest between the attempt to make your actual '83 soft rock easy listening album that is not a wimp and actually has teeth that tear at your heart, and letting a slight nervousness perhaps spoil the whole thing.

'It'... I can't even bear to call it that! The Pulp Album is all worthy 'classic songwriting' in the Jimmy Webb/aforementioned artists mould. The first track 'My Lighthouse' has a light soaring feel about it that is truly wonderful - it's the single from the album and as I say, would stand ably side by side with Garfunkel or Joel on a good late-night station.

Things seem to get gradually worse from there on. 'Wishful Thinking', the next track, is powerful Neil Young circa 'Harvest' but this is, in effect, all you get. Henceforth, Pulp meander a little and introduce a flute which is disastrous and pompous-sounding; it introduces a note of eccentricity to the affair that rather lowers Pulp's ambitions overall.

By the second side, what was pleasant and almost moving has become airy fairy. Jarvis Cocker's voice cracks up, doesn't move you on 'Blue Girls' as it needs to, and a whole barrage of instrumentalists take over and crowd round Jarvis when he should have been left alone with his piano, moving you.

Instead, you are finally given a kind of celebration of The Sixties Singer Songwriting Greats. Pulp, by the end, are floating on a bed of sumptuous nostalgic airy fairyness that satisfies a bit but does not claw at your heart.

Perhaps the reality — that it's well nigh impossible to make an easy listening introspective LP in a country ready for riots and needful of loud guitars — finally got to Pulp. Even then, 'It' is worthy of sustained bargain-bin hunting.

I can remember being horrified at finding the strange word "emetic" pitched casually in the middle of a comprehension passage in an English exam. I hadn't a clue of its meaning, and upon finishing the paper, naturally rushed for the nearest dictionary to satiate my curiosity. Hastily leafing through the dusty pages I found the entry. Two simple words: "sick making".

This record brings it all back, or up, as the case may be. It is gooey to the gills, an aural description of the word emetic, and akin to shoving your face into a giant strawberry cake. It comes dressed in a sleeve that resembles a football pitch with a smear of jam over it, and is (be thankful for small mercies) another example of the ever increasing species - the mini album. Just seven tracks, with little factual info, save a list of the participants and track titles.

"My Lighthouse" opens the unfortunate affair to the sound of seagulls and lilting guitars. There's a vocal that's terribly pronounced, plum-in-the-mouth and drippy, and some wimpy, well suspect lyrics that scan like Betjeman in comparison with some of the other poetic gems to follow. It's totally soporific, polite, dull, and almost bearable as the lesser of the seven deadly songs included.

You want chirping flutes? You got 'em, on the next cut, "Wishful Thinking". I think it's fine to embarrass someone by quoting some lyrics: "I recall a special friend, I invited her home for tea / And while my mother cooked the meal she was under the table with me" (From "Love Love"). Yes, playing with his dinky toy no doubt. There's equally bad stuff elsewhere, but the syrup's beginning to clog up the typewriter.

Then there's the backing vocals. Every other track features a choir of massed angels on supporting "la la la's" and even a "bom bom bom". Imagine a battalion of Sally Oldfields and you've hit the net. Plus the ethnic balalaikas or bouzoukis of "Boats and Trains"...ah, I hear the call of the kebab house, or rather pass the sick bag. I can't see this lot wowing them at the Batcave somehow.

The barely hidden theme (or obsession) of this record is love, but the way in which the writer, one Jarvis Cocker, has expressed his thoughts in words makes the already lightweight music creak and collapse under the strain of slop and mush. It really doesn't bear up at all for the outside listener, although I've no doubt all involved are sincere and believe in it. Any suggestions of what to do? Well, in parallel terms, "pulp" means the same as "recycle".

IGNORED by the public but revered by the critics. Pulp's quiet debut contained little of the severity or dark humour that marks their later material. It's a collection of plaintive, mainly acoustic ballads likelier (discounting the quintessentially English vocals) to have originated on America's West Coast than Sheffield. A patchy first side is illuminated by the gently swaying 'My Lighthouse' but the second features two certified classics: the lengthy crooner, 'Blue Girls', and the sublimely ridiculous ersatz steamboat jazz of 'Love Love'. Goth fanciers should note that Pulp guitarist here was Simon Hinkler, later to crop up as Mission axeman.