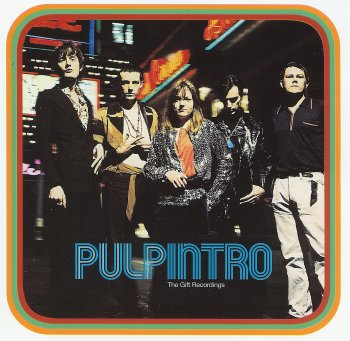 This album comprises the three singles released by Pulp on Sheffield's Gift Records during 1992/3.
It is intended as an introduction to the group for those who may have missed these songs first time around. Welcome. 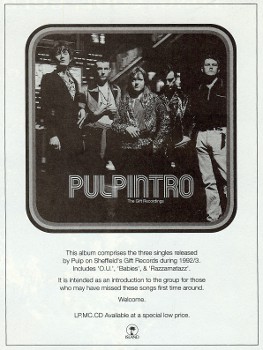 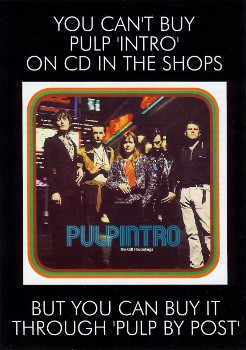 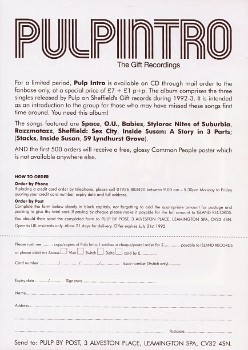 Despite the press release above claiming that this compilation could not be bought in shops, it was definitely available in some of the larger UK record stores.

They want to be Number One, that's for sure. Far from The Fall's wilfully hard-to-swallow sludge-rock, Cocker's instincts are unerringly poppy: witness catchy, uplifting A-sides like 'Razzmatazz' and 'Babies'. Maybe all Pulp need is a breakthrough single, like Soft Cell's 'Tainted Love'.

In the meantime, this mid-priced mini-album - the fruits of Pulp's three-single spell on the Gift label - is, apart from the clichéd 'Space', a near-perfect introduction to Cocker's seamy world. And it really is his world: like Billy Liar's own private universe, seeping into the grimy reality of a small Yorkshire city, Cocker offers a beautifully detailed sense of place and of heightened feelings - directionless lust, unrequited love, and a wistful sense of life ebbing uselessly away.

Unlike Liar, the actual grimness is part of the fantasy: witness the dour roll-call of northern towns recited in heavy breathing on 'Sheffield: Sex City', or the fact that the thrill of hearing other people shagging is dependent on the thinness of the tenement walls. It's so much deeper and more convincing than Suede's tales of f—ing skinny men in the backs of cars.

Like Susan on 'Inside Susan', though, you can't help feeling no-one will ever really understand Jarvis Cocker: he's just a bit too rich and strange to look good in the spotlight. It would be fun to see him on Top Of The Pops, though. Then maybe, come the 21st century, students will be drunkenly dancing to 'Styloroc - Nites Of Suburbia' instead of 'Super Trouper'. Buy this record - for your kids' sake. (8)

Pulp, if anything, are anti-glam. The sequins aren't worn in a "we can all be stars if we wear glittery things" way. When Jarvis Cocker and his band of suburban outcasts don the viscose gladrags it's to mesh in with the neon sleaze of the city that spawned them. While Suede sing about the infinite possibilities of the next life, of surmounting this drizzily everyday torpor, this is the next life for Jarvis. On the wrong side of 30 with 12 wayward years in pop behind him, his group have reached an arresting, fantastic climax. And Jarvis, as this mid-price update attests, has become possibly Britain's grubbiest, greatest sex goon since Quentin Crisp.

So this is the deal. All the songs that comprised Pulp's last three EPs. Every one a Maker Single Of The Week, every one a sordid fluorescent cavalcade of "Dare" synths and amyl basslines, every one throbbing with the nocturnal disco babble of Yorkshire's pale, pathetic bri-nylon answer to Barry White. All of them improbably, disturbingly sexy. And why? Because aside from being as mad as a hatstand, Jarvis Cocker understands that for young people, the detritus of pop culture has more to do with discarded Pot Noodle cartons, Richard And Judy and images of spot welders snogging precinct girls outside Sheffield nightspots than quoting Burroughs and copying the third Big Star album.

Because, basically, Jarvis Cocker is a poet. This much you'll know if you've heard the pervy Gainsbourg-isms of "Babies" and "Razzmatazz"— fractious, voyeuristic forays beyond the closed doors of Britain's council estates. But for the full cinemascope extent of Jarvis's vision, try "Styloroc", a hilarious and gripping portrait of "exotic" Sheffield in the eyes of its alien narrator. It's surpassed only by "Sheffield: Sex City", where Jarvis grunts and sighs through a tale of sexual longing in the anonymity of the Yorkshire suburbs.

Just some of the joys that make "Pulpintro" as thrilling as having your inside leg measured by Mr Tickle.

How Pulp, Sheffield's puzzling pop surrealists, ever got lumped in with the glam retro fad is be­yond me, since they go way be­yond simple kitsch into the realms of everyday absurdity.

Pulpintro is a zippy collection of all their independent Gift As and Bs, including the mini-epic 'Inside Susan: A Story In 3 Parts' which wouldn't pass the censor, and the noise pollution investigation known as 'Sheffield Sex City'. The lyrics lead Pulp's melodies by the nose a bit, but they exert a peculiar, conversational spell. Com­bined with the Fire LP Separations which included the very leg­endary 'My Legendary Girlfriend', this is pretty much Pulp to date. Now we await the great leap for­ward that a major deal is sup­posed to herald. • 6

Retrieved from https://pulpwiki.net/Pulp/IntroCompilationAlbum
Page last modified on April 18, 2017, at 02:11 PM