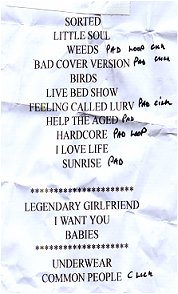 My Legendary Girlfriend was not played in the end. A rendition was heard during the soundcheck.

Pulp first expressed their yoghurt-knitting sympathies with last year's 'We Love Life' album. Opening with 'Trees', Jarvis educates us in the ways of righteousness, country etiquette and the human respiratory system. But what begins as a social service quickly ascends into the spiritual realm as the audience are exposed to some of the most uplifting, emotive songs in the history of melodramatic pop. Hit after hit, each played with the focused energy of a new band looking to win over their first crowd. 'Birds In Your Garden' is throwaway pop at its most sublime, while 'Weeds' is nothing less than a folk anthem. As always, though, depravity soon seeps in 'FEELING CALLED LOVE' and 'This Is Hardcore' are sleaze Pulp have picked off the streets, dusted down and taken to the ball. Meanwhile, the intoxicating outro rebellion of 'Sunrise', which sees Jarvis ripping at his clothes, and the sly come-on of 'Underwear' make it clear Pulp want to do more than teach us about shrubbery.