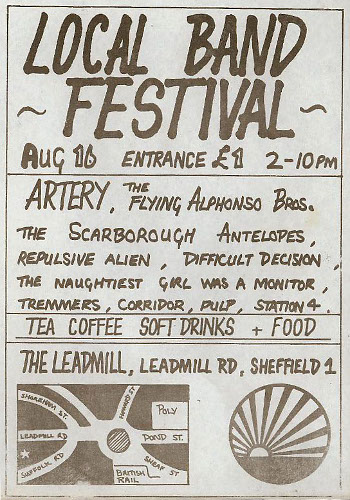 Pulp played second from bottom of the bill. The other bands were:
Artery (headlining), The Flying Alfonso Brothers, Scarborough Antelopes, Repulsive Alien, Difficult Decision, The Naughtiest Girl Was a Monitor, Tremmers, Corridor, Station 4
(Some sources also list 'Vector 7-7', but they appear on neither the running order nor the poster, and presumably didn't play.)

Russell Senior was present and wrote a review for his Bath Banker fanzine (see below).

Teenage Kicks riff on ½ acoustic guitars but different words. They claim to have written "Stepping Stone" - it's the definative version! "Subtlety time, dedicated to Elvis" sounds like "Don't Fear the Reaper" a bit. A dirge. "Message for the Marshians" with a keyboardist who hadn't learnt the other songs. Another dirge. The appearance of the front man is entertaining. A fun band. Tuning up of hopelessly out of tune semi-acc. "Happy House" riff out of tune, different words. "I won't say that this is the penultimate song because that's pretentious. "This is for dancing but I don't suppose anybody's going to dance. Sounds like "Christine" and is a disco spoof! I wonder what Kieth Strong would say. Vast cheering for encore. 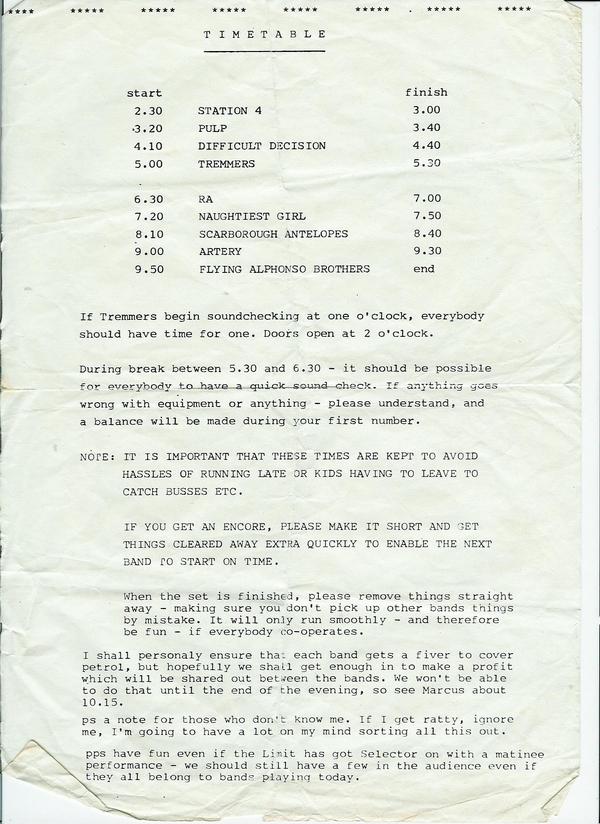 Running order courtesy of http://www.myspace.com/tsitasmusic (note different bands listed - might have changed on the day?)

Retrieved from https://pulpwiki.net/Pulp/Live16August1980TheLeadmillSheffield
Page last modified on November 20, 2013, at 04:37 PM