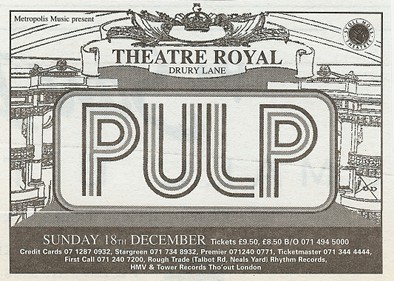 The Pulp Xmas concert at the Theatre Royal Drury Lane could have ended in tears - the over excited youngsters dancing upstairs were gyrating so wildy that cracks were appearing in the balcony structure. The theatre managers were wanting to stop the show before the end of the set but we managed to pursuade them to let us keep going through two encores.

The evening began with a new band called, for that night at least, Vittorian Amastronaut (they were previously called Tomorrow's People Today) They had some technical troubles but I thought they were great and you should go see or hear them if you get a chance. Next was "The Black Tower", a film by John Smith, the respected English independent film-maker who taught Jarvis at St Martin's College. Menswear followed, proving to everyone that they're not just pretty faces (though that counts for a lot!), and that the hype is not entirely groundless, but based on some good songs, style and panache.

After an intermission, the curtains were raised to reveal Pulp, who opened with two old songs - Love Is Blind and Death Comes To Town - followed by, oh you know, a string of hits and favourites, and one entirely new song called We Can Dance Again. There were a few moments of tension as Jarvis performed precariously on the specially constructed staircase, but there were no disasters and everyone left with smiling faces. 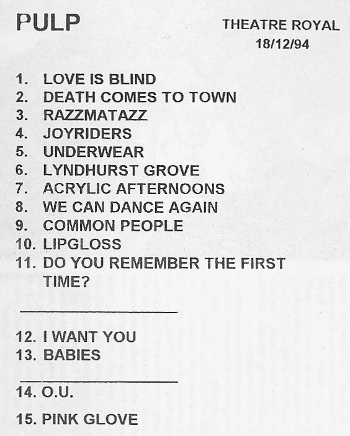 Two different audience recordings exist: one seemingly recorded from the back of the venue (rather echoey), and the other from seemingly from the middle of the crowd (rather a lot of screaming).

Outside, it still reads Miss Saigon, but on stepping through the hallowed portals of the Theatre Royal, glancing round at the mirrors, squinting through the glare of the chandeliers and reflecting that this was the theatre where Charles II first drooled over the ample charms of Nell Gwyn, it seems quite appropriate that our own Man Of Mode, Jarvis Cocker, should bring his travelling pop revue to the smartest venue in town.

So even while you ascend the soft-carpeted stairs to the stalls (under the lofty sneers of the assembled ushers, who view the assembled feather boas, glitter jackets and charity shop cocktail wear with a look of suppressed distaste), there's a sense of occasion that rarely lifts the spirits when traipsing into the Academy in Brixton.

And when the house lights dim and the fire curtain goes up to reveal a huge white staircase ascending to the heavens and a twinking backdrop of fairy-light stars, it really seems like showtime. Not that Jarvis does anything as obvious as mincing slowly down the stairs for his entrance. Instead he darts on from the side of the stage, launches into 'Love Is Blind' and starts a few of his angular Generation Game-style dance moves.

More than ever he's got the chance to play in the spotlight and, naturally, takes full advantage. The Alan Partridge-meets-Saturday Night Fever-era-Travolta look (cream slacks, navy blazer, white tasselled scarf) is well up to Royal Variety Performance standards. If ever Her Maj calls, no doubt Jarvis will be there.

A mere two songs in, though, and most of the restless giggers are up playing musical chairs - which kind of defeats the object of holding a sit-down show in the first place. It was only a matter of time, of course. If you're a fan of jaunty melodies like 'Lipgloss' and 'Joyriders', you're not going to stay sat down as if your mum had dragged you along to a West End musical. That's not what rock'n'roll is about, even the glitterball version that Pulp specialise in.

The music is as brightly coloured as ever and, apart from the odd wayward chorus from Jarvis (never the most technically accomplished singer), the mid-'80s numbers thrown in for variety's sake stand up just as well as prime Pulp, like 'Do You Remember The First Time' and 'Babies'. There's even a new track to chew on - 'We Can Dance, Again' - an instamatic classic complete with a blazing D-I-S-C-O Human League / Donna Summer chorus.

Jarvis admits early on that this is "the strangest gig I've ever been to in my life", and it's doubtful anyone present would disagree. Whether it was a complete success or not is a different matter. In the end it lacked the kind of intimacy they must have hoped for, and at times you almost wished you were watching it on TV rather than jockeying for a view of the main attraction. Great concept, but the reality only came off half-cocked.

I recall few more tingling moments than the opening seconds of tonight's "Joyriders". With magnificent confidence, Pulp open with a brace of oldies, building to a wracked, roaring "Razzmatazz". Down here in the stalls (26 rows of man-made fibre), people are twitching and starting to fizz. Russell and Steve raise their arms high and hold them there, Jarvis launches into a sprawling, skyscraping leap. At the split second his feet crash back onto the stage, the plectrums hit the strings and the entire hall rises to its feet. Just like that. Unrehearsed, remarkable. A lightning-strike moment. We feel young.

And there's a rich, ripping poignancy here, hundreds of happy children unravelling themselves and letting loose to such helpless, hope-less pop: Pulp, glam-rockers? In truth, they turn glam inside out. Pulp bypass Sparks/Bowie/Bolan's full-on dazzle, go right back to Gary Glitter and The Sweet, and shine a bright beam into cracks in the foundation where pale flesh peeps through. Jarvis is fascinated by shortfall, lonely people lunging for the moon, crashing into the gutter; the way a spinning mirror-ball in a provincial disco, intended to ooze throbbing, coursing excitement, can succeed only in exposing the emptiness inherent in the life of anyone who thought a ball with some mirrors on would look exciting.

Hence the kids in "Joyriders", hotwiring against hopelessness, or the antagonists of "Razzmatazz" and "Lipgloss"; hence tonight's Barbara Dickson-style stage set (tiny lights studding the backdrop for that "starry sky" effect; a steep staircase for Jarvis to descend through oceans of dry ice).

On "Common People" (a stripped-teeth sneer earmarked as the next single), that empathy ignites - a wealthy art student becomes fascinated with people with prole culture, starts hanging round rough pubs and tacky discos. And still she will never understand because she will never know what it's like to lie in bed at night and know there's nowhere to go.

"I do suffer from vertigo," murmurs Jarvis. "So every time I get on this staircase you'll know... I'm really giving something."

Tonight, Pulp are the richest, strangest thing, a throwback to that early-Eighties New Pop concept of "passionate irony" - hope, hurt and hysteria channelled through poignantly outdated showbiz gestures, kitsch not as some sniggering mask, rather a defiant glamour forged from the ruins of modernism. Crimplene's sheen, the glitter of spittle. A way not to cry.The prettiest lie. 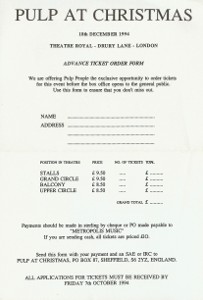 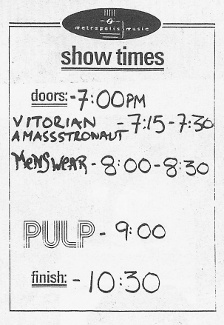