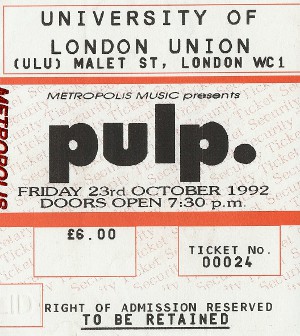 What's all the fuss about?

They're out en-masse tonight; Damon Blur, Miki and Chris Lush, Simon Suede and Loz Kingmaker, and half of My Bloody Valentine are floating around somewhere, too. "What's all the fuss about?", I ask myself.

Not The Candyskins, anyway. Hailing from Oxford, they seem to have rather an identification crisis. At the start they sound exactly like Adorable, which I can just about cope with, but after a few songs have degenerated to being The Milltown Brothers. Sad, really. If you ever have the misfortune of seeing them, watch the bassist for a bit of light entertainment. He's quite uncannily archetypal He tries so desperately to make eye contact with the audience and, oh yes, those basslines look sooo difficult, I must say. The expression on his face would suggest that he's having difficulty with them, anyway.

Different sounds bombard us from every direction to give Pulp a fuller sound, far more imposing than on tape. Jarvis throws himself around the stage in a manner not unlike Jagger when he, too, was young and beautiful. Russel looks like a mad conductor and Candida, absorbed in her playing, nods her head serenely, smiling to herself at Jarvis' lyrics (which are generally about sex in one form or another) and the perfect popness of it all. New single 'Babies' stands out especially, with its wonderfully cheesey keyboards and strong(ly amusing) vocals.

Pulp are pretty much perfect. Catch - them now before word gets out and everyone wants a piece.

Pulp seems to be an appropriate name for this band, a kind of melange whose style is really unidentifiable. They claim to be a Sheffield Indie Dance Band and supposed sex Gods - Not!. Obviously, a new band just starting out will struggle to find their own sound, but Pulp don't seem able to decide who they are influenced by. 'Flood' [?] sounded like Ultravox had reformed, the doom laden 'Countdown' bore resemblance to Joy Division and the new single 'Babies' was not a million miles from The Kinks' 'Sunny Afternoon'. The rest of the 60 minute set had overtones of The Cure, Marc Almond, The Stranglers and Japan. Schizophrenia Ahoy!

Bass player, Steve Mackey tried to imitate Peter Hook's low slung playing technique and failed miserably. The guitarist, Russell Senior looked very out of place playing his violin and guitar like there was a revival in rock and roll and as for the lead singer Jarvis Cocker, well.. this warrants a whole review.

His hip thrusting, early Jaggeresque flouncing brought tears to my eyes. He pranced in a cast off from Bob Geldolf's wardrobe and warbled out the lyrics with his microphone as far down the mouth as possible.

Basically though I enjoyed the whole atmosphere and found my toes tapping away in the sedateness of the upper balcony where we could see the seething mass below. If you hear their music in a club, you'll want to dance, but I wouldn't go as far as to suggest that buying the records was a necessity. My co-concert goer's quote of the night was "If Pulp are Sheffield Sex Gods, then count me as a pagan!" 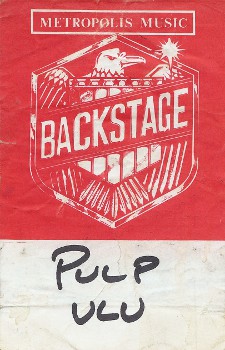