A promo CD of the whole set was produced by Island records and subsequently bootlegged as Pulp At Homelands.

Lisa Verrico in The Times:

The choice of Pulp as the night's main act seemed a little strange. Nevertheless, the Home arena was crammed for the Sheffield band's first big gig since Read­ing last year. Opening with Sorted For E's And Wizz — a song about a lost week­end at a festival — was a wise move, as was bringing a big-budget light show with strobes and lasers. A confident Jarvis Cocker chatted to the audience, in­troduced half a dozen songs from Pulp's forthcoming album, due out in the au­tumn, and did the sort of dramatic danc­ing only he can get away with.

Of the new songs, Feeling Called Love [sic](1), on which Cocker half-spoke, half-sang over a techno-tinged backing track, and set closer Sunshine (due to get the dance remix treatment, said the singer) went down best. The highlights, however, were Common People, the lovely A Little Soul and a noisy This Is Hardcore. Pulp are back, and it looks like they're go­ing to be bigger than ever.

Headliners Pulp's performance - their second this year after the Hay-On-Wye festival on May 24 - confounded expectations that they were poorly suited to a dance festival. "We were really nervous about playing here, but you've been great" commented Jarvis Cocker at the conclusion of a set that included favourites such as Common People, F.E.E.L.i.N.G. C.A.L.L.E.D. L.O.V.E. and Sorted For E's and Whizz, as well as a selection of tracks from their forthcoming, as yet untitled, album. 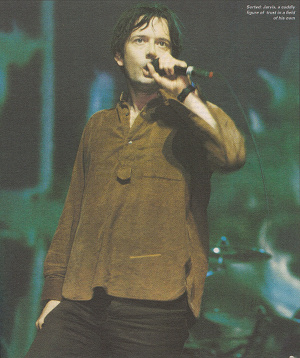 Pulp Up the Jam!

7.45pm Pulp are magnificent. Orange sunset streaks into the Ericsson arena as Jarvis high-kicks his rejuvenated group into — what else? - 'Sorted For E's & Wizz', and suddenly the prospect of being richly entertained by an intelligent, witty and glamorous collective – by humans, not Timo Maas – becomes hugely exciting. Horticultural in theme but universal in appeal. Pulp's brace of new songs blend the baroque sleaze of 'This Is Hardcore' with the everyman euphoria of 'Different Class'. But Pulp have not gone exclusively dance, as their billing might suggest; rather, in 'Trees' and 'Weeds' and 'Minnie Timperley', they offer delirious Moog-fuelled unorthodox pop that spooks and surprises in equal measure. 'Common People' crescendoes heroically over a Krautrock groove, and several thousand misfits text their friends the good news: Pulp ;-)

Cocker dances like an intoxicated mime artist, limbs and digits askew at improbable angles. Tonight he is clearly nervous, gently aggressive, much as Alan Titchmarsh might be when, say, explaining re-potting methods. Casual but knowledgeable; a cuddly figure of trust. They close with a song called 'Sunrise', a kaleidoscopic mind-mash that marries 'Common People' pomp with triumphal Spiritualized white-out. It's an astonishing end to a superb show, their most important since that era-defining Glastonbury '95 moment.