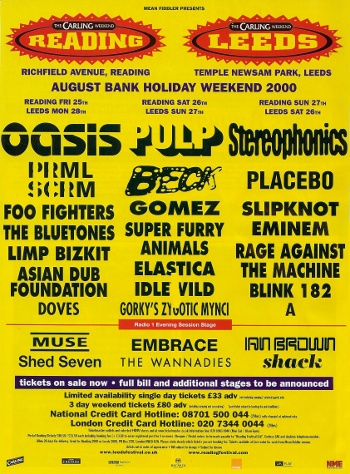 ITV at the Festivals (More details)

An audience audio recording of the whole set also exists.

If Beck's triumph is a predictable one, [Pulp's] closing set is one of those festival events where you remember exactly how good a long-absent band really are. Again, it's that rare combination of cleverness and potency, a wry subversion of pop received opinion that compels them to begin with their biggest hit, 'Common People', done over in the humming motorik style of Krautrock superstars Neu! This is Pulp fur immer, as the set stretches from 'Babies', through the Britpop smashes and controversies, the creeping masterpiece of 'This Is Hardcore', to four new songs that combine those brashly euphoric choruses with grace in place of jerks and, in the case of the superb 'Sunrise', with blazing spacerock.

Jarvis Cocker carries on the freaky dancing theme, "Common People"starting as PULP mean to go on. The new songs are brilliant, halfway between "Different Class" pop and the darker leanings of "This Is Hardcore". Get excited for the new album. Uncle Jarvis is his old chatty self: "I'd rather shit on my own back than let this evening go off without some damage occurring." You realise just how much you've missed them when the still-perfect "Babies" signals the end of the night (does the lack of "Disco 2000" mean it's a century too late to play it now?). Once again, the mis-shapes are raising their voices. About time too.

Few would want to follow [Beck], especially after an absence of two years, but Pulp are, to borrow their own terminology, a different class. Jarvis Cocker, barefoot, spec-less and thoroughly de-geeked, sauntered on like he'd just come back from lunch, and led the band through the perfect conclusion to the evening. Five highly promising new songs sat contentedly with Common People, Do You Remember the First Time?, This is Hardcore and the rest, as Pulp restaked a claim as Britain's ultimate festival band - in a Carling Premiership all of their own.

The grand prize goes to a barefoot Jarvis Cocker of Pulp, who returned after a two-year hiatus to send the crowd home smiling on Saturday night. Cocker gives his all on stage, chatting amiably in between the twisted suburban tales of his songs, and then dancing like a man trying to run in several directions at once while the music plays. Several new songs were unveiled, including 'Weeds', another classic Pulp hymn to the downtrodden, and a glorious guitar-led climax in the form of 'Sunrise'... 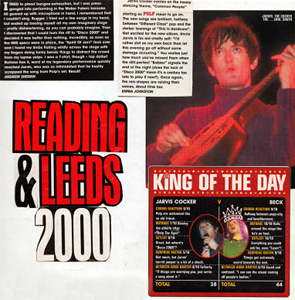 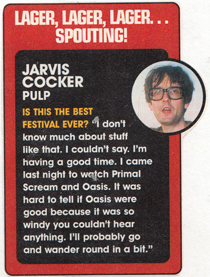