Pulp: Master of the Universe (single) 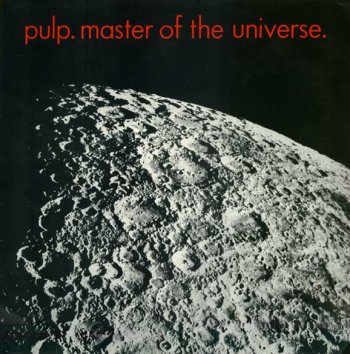 Master of the Universe is the second and final single from the album Freaks. B-side Silence is the only track from this period of Pulp's career not to feature on the Masters of the Universe compilation. It was left off at the request of singer Jarvis Cocker, who stated "I banned it from going on the Fire compilation, because it's terrible - I couldn't live with it being out."

'Master of the Universe' - an explanation:
He was God and she was His congregation.
But when she lost her faith, He lost His power.
Now the thigh-length boot's on the other foot.
(You might think it's funny, but someone's always got to be boss.)

This record marks the end of Pulp #3. Pulp #4 will follow shortly.

Fire put out the "Master Of The Universe" single off "Freaks", which I find intensely embarrassing. My voice - I don't know what the hell I was thinking of. That was written as I was recovering from the window incident, and I got bought some 'Masters Of The Universe' shampoo. That features the only Fire track which hasn't been reissued: "Silence", from demos recorded in an old karate studio, written at that first rehearsal with Russell. Oh, it's so depressing, a two-note keyboard drone, someone playing one of those hunting horns you have on the living room wall and me alternately talking and screaming this story about a love affair that doesn't work out. I banned it from going on the Fire compilation, because it's terrible - I couldn't live with it being out.

I'd got a Serge Gainsbourg album, which had a track called "Manon". It's not the same tune but, being naïve, I thought "Manon" was a man's name. In the end, I found out it was a woman's name! Again, I spoil it by speaking in French towards the end, which is embarrassing. The version on the "Imminent 4" compilation is different - we remixed it infinitesimally. I never saw "Master Of The Universe" in a shop. I never even got sent a copy, so it was obvious the relationship between us and Fire wasn't great.

Not the Hawkwind song of (nearly) the same name, but Pulp's own investigation into life, the universe and everything. "You may think it's funny, but someone's always got to be the boss" says the sleeve cryptically, and Pulp are just as mysterious on vinyl. A keyboard-powered nightmare jingle.

Pulp, having decided to worship me in song, do so with a certain piquant angst; devious strokeplay involving chafing vocals and mocking drums.

Retrieved from https://pulpwiki.net/Pulp/MasterOfTheUniverseSingle
Page last modified on January 24, 2018, at 08:08 PM