Pulp
poncing around in a silly shirt

You join us, reader, as Jarvis is explaining to me how he incited a crowd to bait him while live on Radio One. We're sitting on Giant Bean Bags in Jarvis' luxury S13 penthouse flat. Jarvis and Russell have just soundly thrashed me in a race to Gleadless and back. But then they were on Raleigh Grifters, and I only had a Chopper. That gear-stick isn't all it's cracked up to be. Jarvis rises like the Pink Panther getting out of that funky sports-car, unzips his snorkel parka and reveals a quite outrageous acrylic shirt. "Refresher?" he asks.

No, no, not just now. What's this about your cock, then?

"Well, we were live on the radio and it wasn't just Britain, it was going out to loads of other countries too. So I said now's your chance to give a message to the world. All I could hear was a roar, but apparently at home you could hear very clearly someone shout "Lick My Cock!" That's a kind of a nice thing, an event. I quite like it when the audience gets a bit nasty, it's more Interesting. It keeps you on your toes if people have a go. Obviously it can go too far and start throwing bottles. But I often get asked if I'm a puff."

Hmmm, have you always dressed up like Georgie Best on a charabang trip to Wipsnade Zoo?

"Yeah, it's something I used to get a lot of grief for. Well, I still do when I come back here. I get alot more grief for what I'm wearing in Sheffield than I do in London. People for some reason take it really to heart and want to deck you. I could never understand that, why someone would actually want to physically harm you because you look different to them."

Jarvis freely admits to being "a class traitor", as he bounces up and down in the corner on his orange Space Hopper. He's lived on Carnaby Street in the centre of Swinging London for six years. How come it's different in London?

"If you're in a pub in Sheffield, and you say "Oh, I want to be an artist", people just say "Shut yer face and get a real job". Instead of telling people you're in a
band, you might as well say "Oh, I sleep all day". That's the level of respect you're going to get; you're just a waster." "There are a lot more interesting and very creative people in Sheffield, there ARE a lot of idiots In London. But in Sheffield it often gets knocked out them, because there aren't that many outlets to BE creative. People can get very bitter and twisted; they KNOW they've got something to say, but it's difficult to say it without a platform. And all these people in London have a lot less about them than those in Sheffield. But they are successful simply because they are in the right place where there's plenty of opportunities. It's not paved with gold, but there is a chance."

Ooh, Buckaroo! Now you're talking. Giss a go. You do go on about Sheffield alot, though don't you?

"I'm reasonably proud to have come from Sheffield, I'm not ashamed. But I don't say that because I think it's such a fantastic place. I didn't really realise until I moved away that Sheffield has had a lot to do with the way I turned out as a person; and when I realised it, that was when I started writing about Sheffield more specifically. I've always written about myself; because I find myself such a fascinating subject. But moving away makes you realise Sheffield IS different from other cities. It does have a certain character. I'm sure our music would have been different had we come from Huddersfleld or Lyon."

Jarvis breaks out a sly half pound of black pudding and passes it around.

"The trouble with writing about Sheffield is that you get seen as a professional northerner, your Brian Glovers, your Bobby Knutts. And it's really irritating to see articles written in Sheffield patois. It just makes you sound thick! You've got your flat cap on and you're just about to take your whippet out. If you did that with a black person! It's milder form of racism; saying "Oh, you're a northerner, you're a bit funny because you speak differently to us."

Why don't you come back then?

"Well, for about two years I hated London, I found it terrible, but now I actually like It. I think like a lot of things, you shouldn't go back. Like if you pack someone, you should never go back out with them; it won't work."

Did Sheffield use to be any different in the days before Supertram? You know, before they invented all these horseless carriages.

"When I started going out, about 1983, it was quite exciting, an interesting time. There were quite a lot of unusual bands about. People doing quite strange things just for the sake of it, without thinking "Oh, this is a career move", just trying things out. People think of Sheffield as the Human League, but they had sold out way before they ever got popular. Bands like Artery doing interesting stuff never got anywhere. I come from Intake and when I was 13,14, I had to walk home up City Road past the Hyde Park flats. I'd be absolutely shitting myself. You had to actually really want to go out. It was scary, but you did it because you really cared about the music".

Is that where all your influences for stuff like Lip Gloss, Razzamatazz come from? Late 70's? I'd have never have thought it before now.

"Razzamatazz is 80's isn't it? That was a good programme. Lipgloss would have been when I first started going to parties late 70's, early 80's, it was a real big craze amongst the girls. Loads of different flavours; it was an excuse to kiss them, because you wanted to taste their Lip Gloss. Well, that's what I tried, anyway; it didn't seem to work that well. No, the references aren't particular to any period, they're more my childhood; Babies" was when I was about 13."

You do tend to get lumped in with other bands who have a certain fixation with their big sister's record collection and roll-on deodorant. Like Blur, Denim, St. Etienne, and the Auteurs to name but four from the top of this list I've brought with me.

"Well, Blur are getting better now they're getting that Pulp influence! No, I'd much rather be lumped in with all those bands than when it was all Swervedriver, Slowdive, Carter, Ned's and the Wonderstuff. All of which, especially the last three, I find absolutely shocking; they shouldn't be allowed to record! But all the bands around at the moment piss all over them."

Is there a particular "Englishness" to Pulp?

"Yeah, I come from Sheffield and therefore from England, but that doesn't mean that you think England is great, It doesn't mean that you want to walk around in Union Jack boxer shorts and sell copies of British Bulldog. But I think you have to acknowledge where you were bom and brought up; It does effect you and you should write about your experiences and surroundings and the place you're from, rather than an out-of-body drugs experience which is totally subjective and nobody can relate to them. Like the Orb; it's not just drugs music, it's music which ONLY sounds good when you're on drugs."

Ooh, drugs, yes. I've spent the entire afternoon staring at Jarvis' glittery lava lamp, and I'm starting to feel a bit queasy. Could you point me in the direction of the little boy's room?

''As I'm climbing out the window and shinning down the flared drainpipe I can hear Jarvis humming some lyrics. "...And I shimmyed down your drainpipe/hmm-mmm/ 'coz I knew you'd/dooby-doo/Have battered me if I'd stayed/Shoo-doo/Skinny get that you are/hmm-mmm/take the piss out of me would you...? You'll do the Sparks stylophone solo here, Russ."

Another classic. Glad to have been of service, mate. 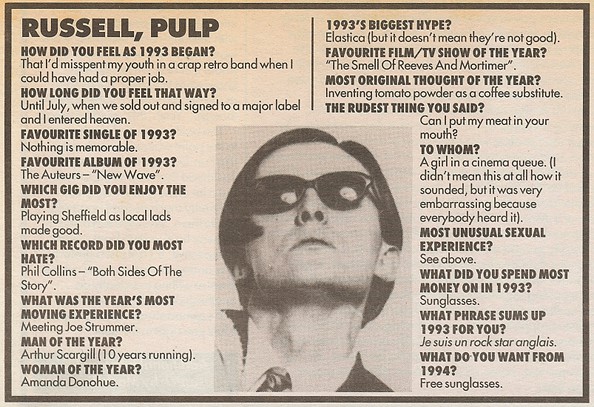 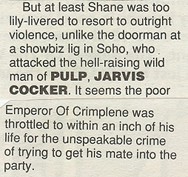 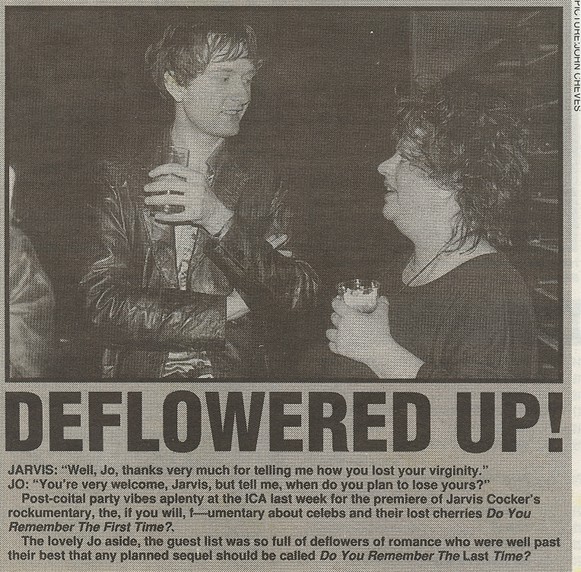 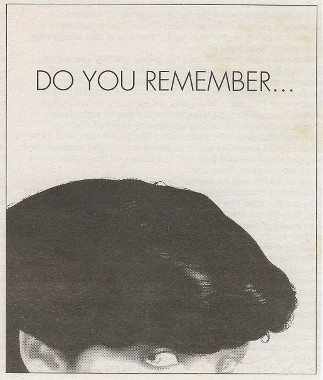 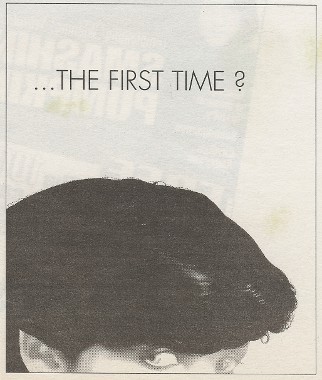 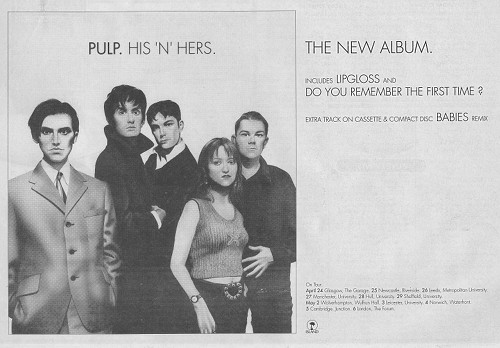 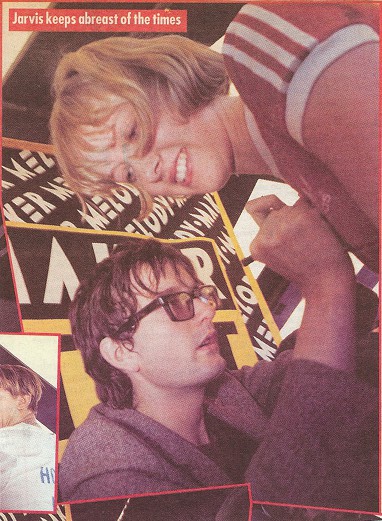 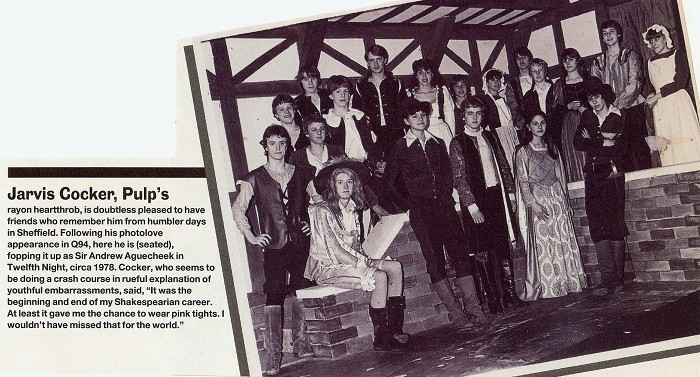 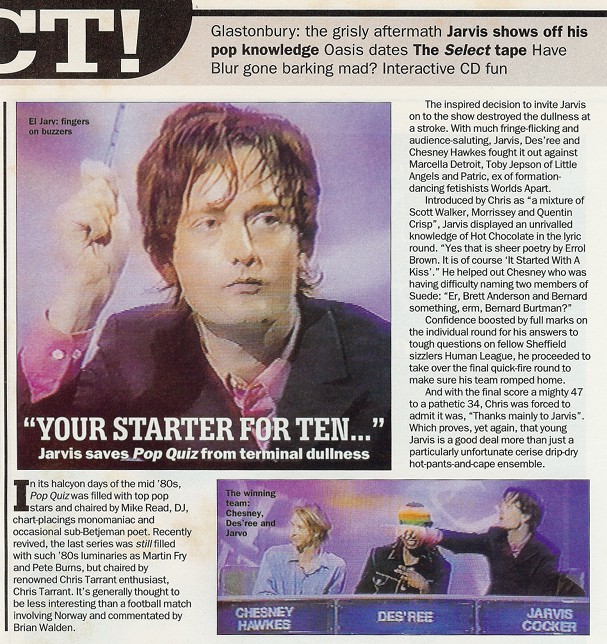 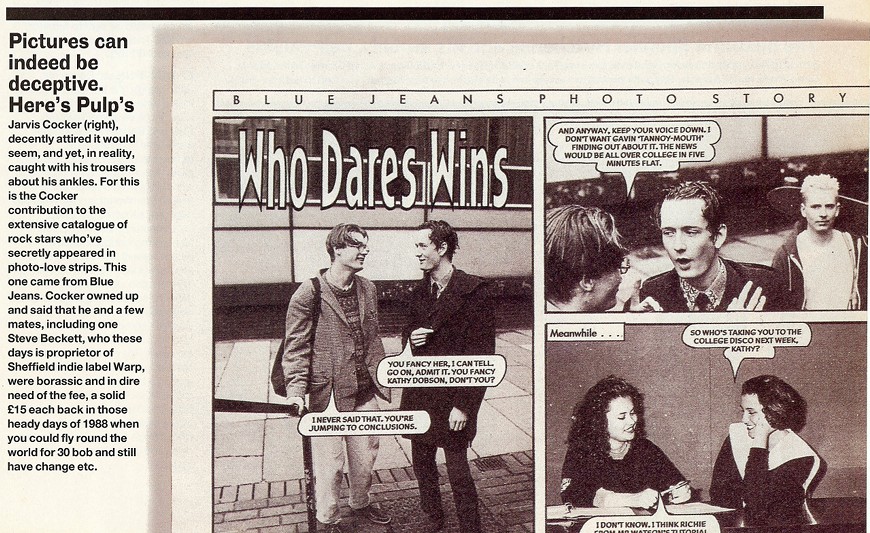 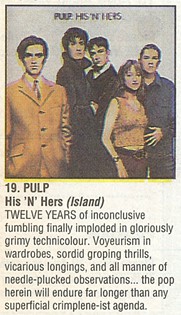 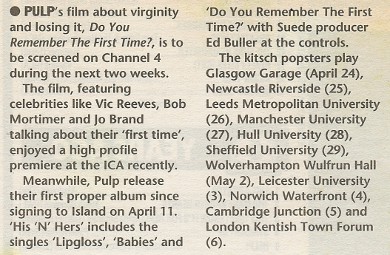 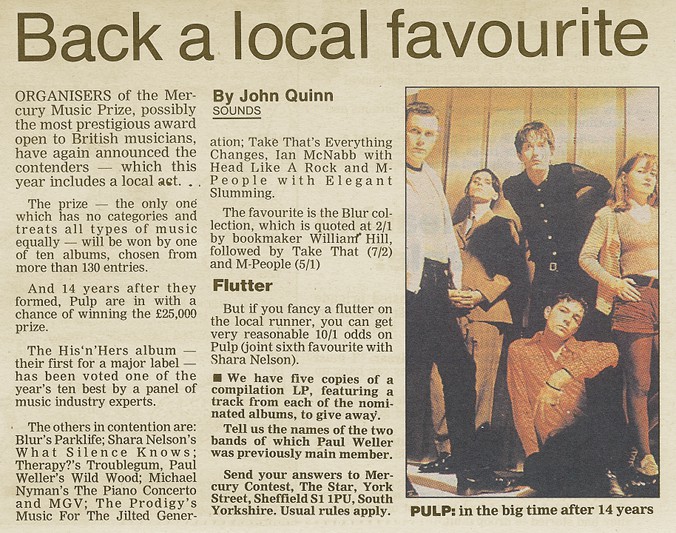 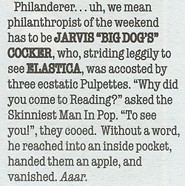 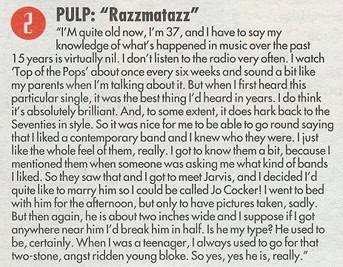 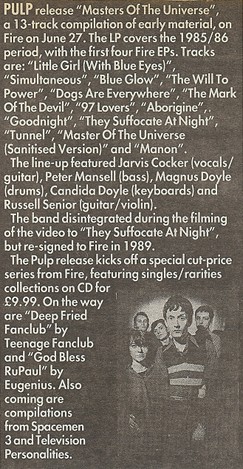 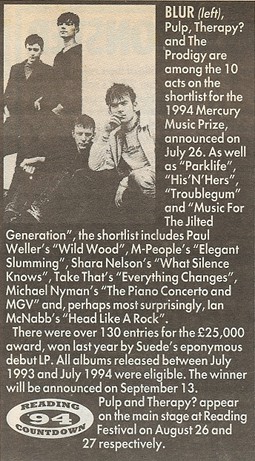 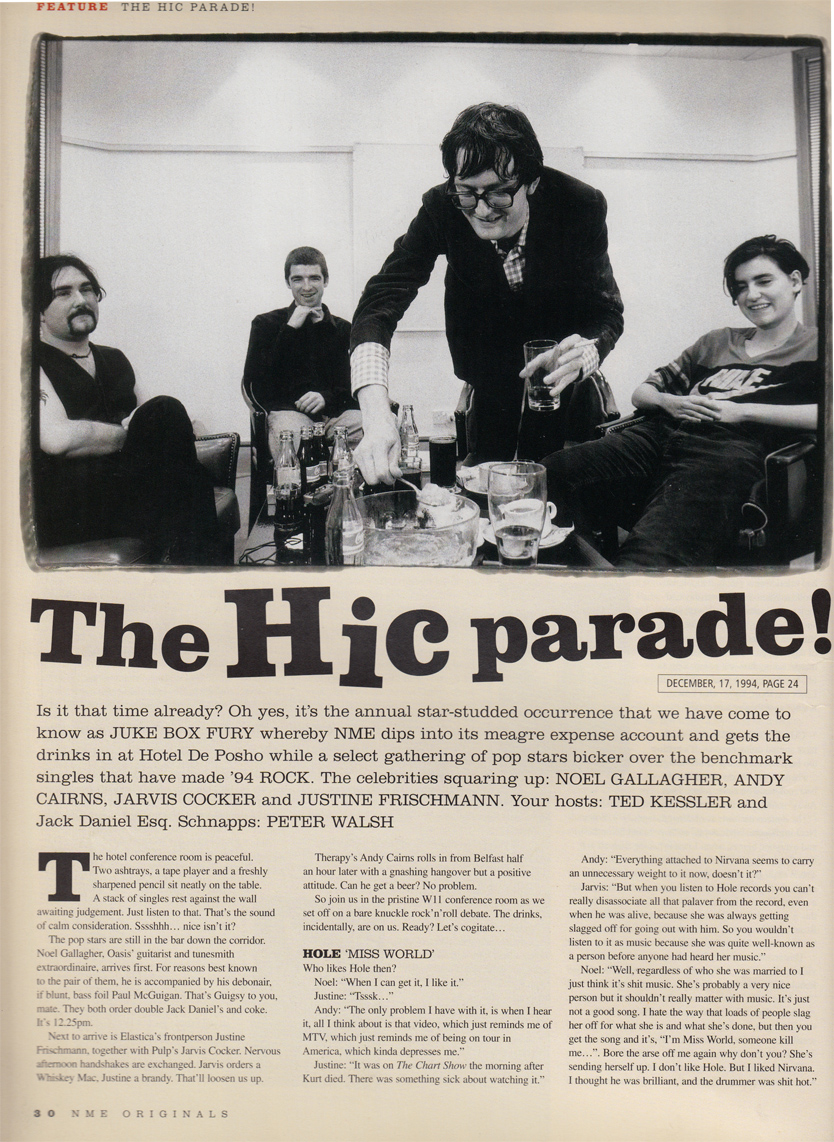 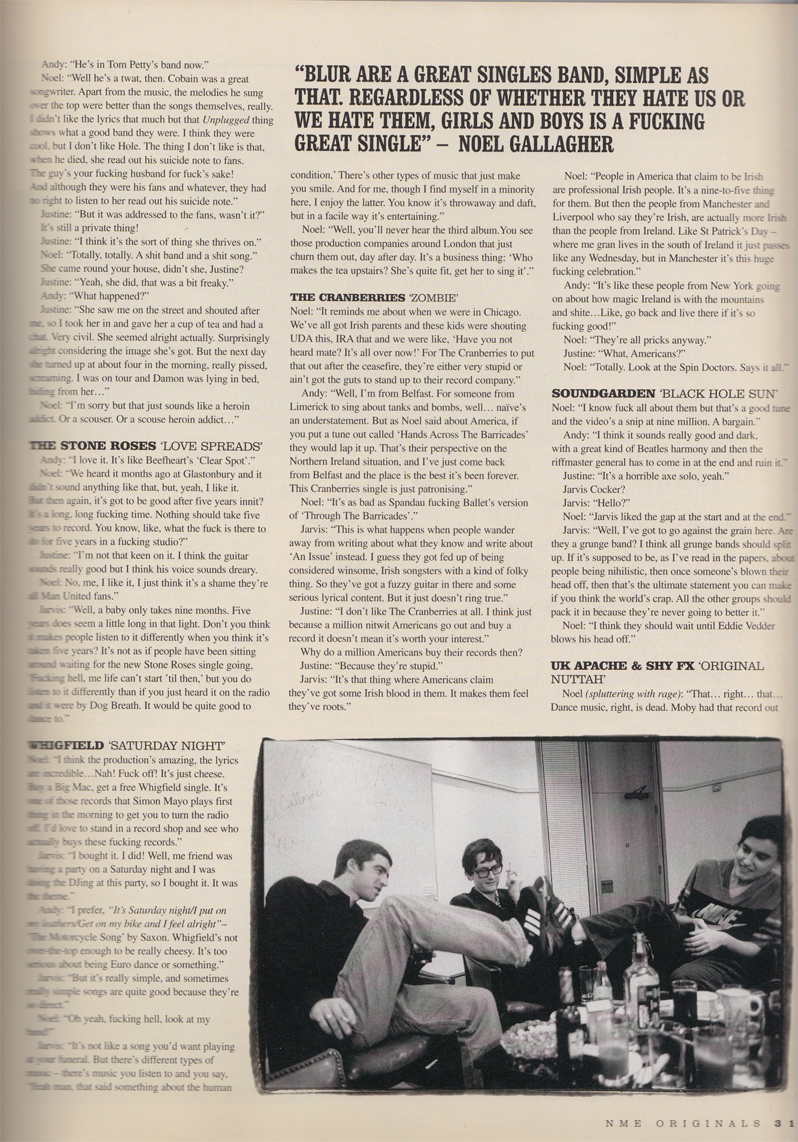 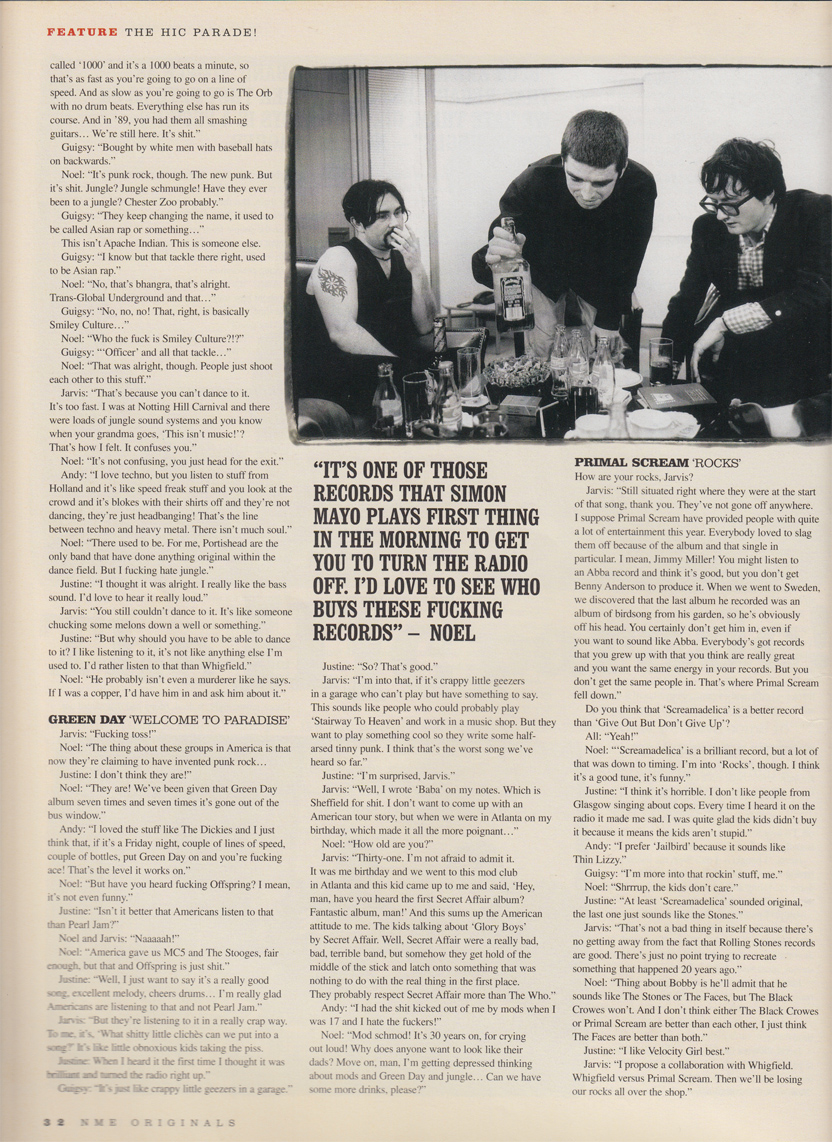 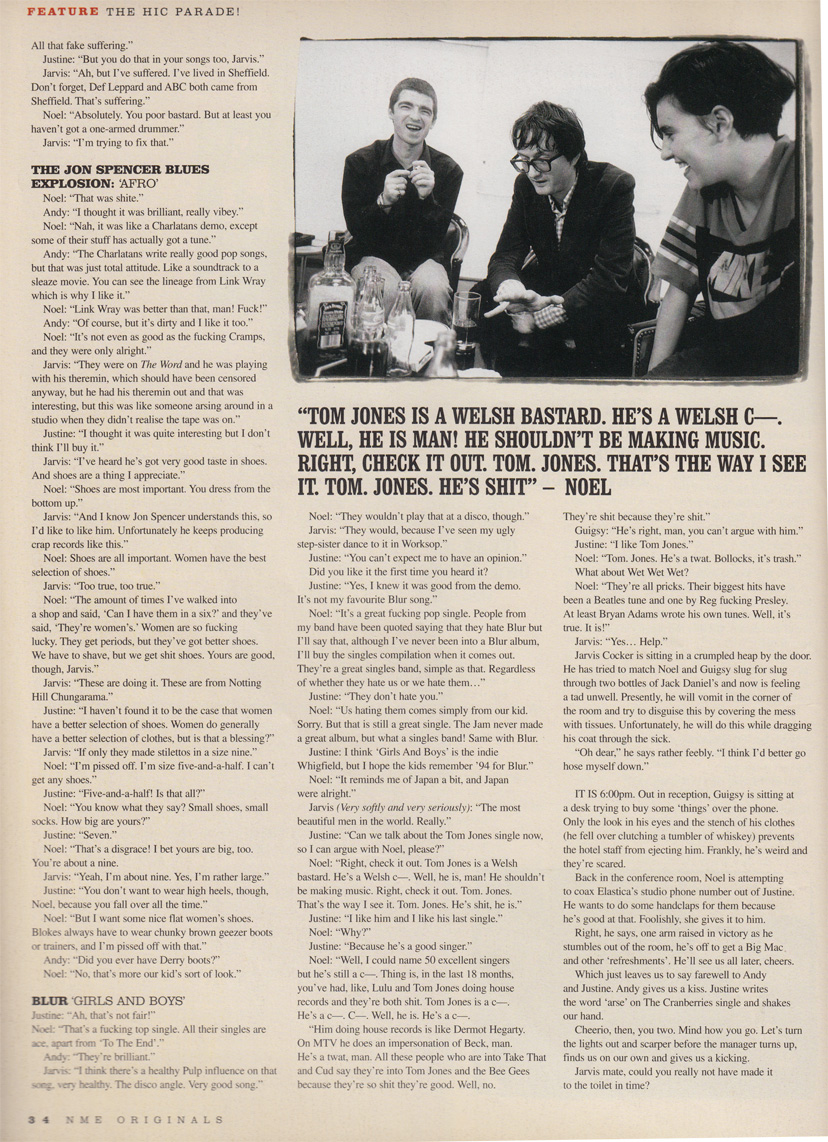