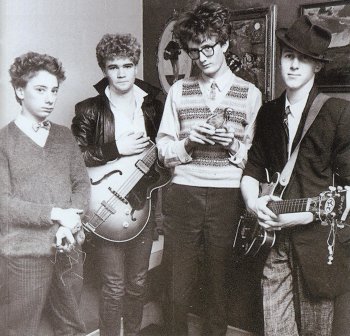 This session has been released on The Complete Peel Sessions compilation CD.

Below are Jarvis' sleeve notes about Pulp's first Peel Session:

[...] the "John Peel Roadshow" was coming to Sheffield Polytechnic & I was going to go & try to talk to the man himself! I went down to the Poly armed with a demo we'd just recorded & lurked awkwardly for the whole evening. When he'd finished playing & was walking away from the DJ-booth carrying his record boxes I seized my chance. I can't remember what I said but I do recall that he said he'd listen to our tape on the way home. I probably mumbled "Thanks" & then that was it: he was gone. I remember being kind of shocked that there wasn't a queue of other people trying to give him tapes & also that he didn't have a minder or anything. Five days later, John Walters (the producer of the Peel Show) called my Grandma's house (we didn't have our own phone at that time) & broke the news that they'd like us to come to London to record a session.

Now, to say that we were excited by this news would be a slight understatement - this was our chance to be on the show that had been forming our whole musical outlook for the last 4 years! The only show in the world, as far as we were concerned, that meant anything. & us 4 idiots, who were all still at school (I'd just had my 18th birthday - Wayne, the drummer, was 15), were going to be allowed on it! This was heaven. This really was a Dream Come True.

We travelled down to Maida Vale in a van driven by a very strange man we'd contacted via a card pinned to the Virgin Records Shop notice-board. We'd had to borrow lots of equipment from a band called "The Naughtiest Girl Was a Monitor" cos we didn't have enough stuff of our own. The session was to be produced by Dale Griffin, who used to be drummer in Mott the Hoople, I seem to remember that he was wearing cowboy boots. He must have taken one look at us & thought "What the fuck have I let myself in for here?". It wasn't that we were naive - it was beyond that; we just didn't have a clue what we were supposed to do. Jamie didn't understand how to work the posh bass amp he'd borrowed, Wayne didn't really know how to set his drums up, Dolly (Peter Dalton) was using his mum's ironing board as a keyboard stand & me... I was just super nervous cos I thought John Peel was going to walk in at any moment. Dale Griffin was at great pains to tell us that we should just set up & play as if we were doing a concert but we didn't really listen to him - for us this was the first time we'd ever been in a "proper" recording studio & we were determined to cram as many ideas & overdubs into the session as was humanly possible. I think the crisis point came when Wayne was attempting to get a home-made synth-drum to work that a friend of his at school had made out of a rubber burglar-alarm mat & an old electronic calculator - Dale Griffin looked at this 15 year-old kid crouching on the floor bashing what looked like a doormat with some wires coming out of it & just put his head in his hands. But to his credit, the session did get finished & now, 25 years later (ouch!), it finally gets an official release.

I'd always resisted the reissuing of this particular Peel Session before because it seemed so embarrassingly naive but now I guess it's long enough ago for me to find that charming. You can certainly tell that we'd been listening to the John Peel show fairly religiously for the past 4 years - "Turkey Mambo Momma" is one part "Gone Daddy Gone" by the Violent Femmes (we'd borrowed a xylophone from school) mixed with a bit of early Pigbag (Peter Dalton was given cornet lessons by a bloke who ended up being lead singer in The Thompson Twins). "Refuse to be Blind" is just a blatant Joy Division rip-off (the strange van driver came back pissed to the studio as we were finishing that one & started shouting "I am a fucking Dalek!" at the point where the vocal starts going way down in pitch). "Please Don't Worry" & "Wishful Thinking" are at least a bit less derivative - the former featuring the home-made syn-drum that caused Dale Griffin so much pain (it did work in the end) & the latter being the only song from this session that made it on to our debut lp ("It" - released by Red Rhino in 1983).