Pulp: Little Girl (With Blue Eyes) and Other Pieces (EP) 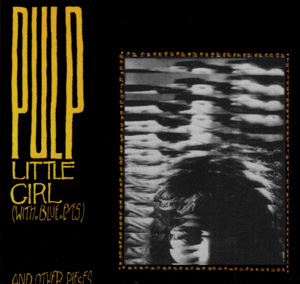 Little Girl (With Blue Eyes) is a non-album single, released in 1985. It features very dark songs, far from the acoustic feel of the first album It. The four songs from the single are all included on the compilation album Masters of the Universe.

The band originally considered Maureen as their first single for Fire Records, they made a video for it but in the end it was never released save for a couple of appearances on compilation tapes.

This was about a girl who gets pregnant. It was after seeing a picture of my mum, getting out of her wedding car, and realising she was only 20, when she got pregnant and had to get married. She was at art college but had to give it up to have me. The song got banned because of the lyrics - but not like Frankie goes to Hollywood. They just didn't play it. It got good reviews - "a Scott Walker for the 80s"! People said, "you'd like Scott Walker," but all I'd heard sounded like Tom Jones. It wasn't until 1987 when somebody gave me a tape of his proper solo albums that I understood his genius.

It was dead strange, I tell yer: tender sentiments, haunting melodies and nightmare visions all wrapped up in the creepy vocal layer of Jake Thackery soundalike Jarvis Cocker. "There's a hole in your heart, and one between your legs. You've never had to wonder which one he's going to fill." Scott Walker sings Jacques Brel... or is it just the impetuosity of youth?

LISTEN Johnny Waller, you fat little bastard, if you're bringing me in records to review you could do a little better than this load of old vicar's garters. Only kidding. It's good, it's very good. A slow motion nursery rhyme broodiness that swirls into alarming hicupping noises like you're playing the record at the wrong speed - a clumsy explanation but the execution is sublime. The song is all about girls realising that their destinies don't have to be tied to a man's. "Hey little girl there's a hole in your heart and one between your legs as well, you never have to wonder about which one he's going to fill in spite of what he says." The singer sounds slightly like Lloyd Cole only harder, and overall the song pursues an enigmatic simplicity that further accentuates its lyric. Excellent.

Ah now, here's a gem. Pulp have won the-lyric-of-the-week-award by a landslide: "There's a hole in your heart / and one between your legs..." Just the kind of smut I'd expect from a band who look like students and have names like Candida, Jarvis and Russell. Poor loves. They sound like Leonard Cohen's Greatest Hits ate them.

It's been made totally in Sheffield, it's released via a Sounds journalist's own label. It's had rave reviews in at least 3 papers. It was faded out by Richard Tandy for its suggestive lyrics, so will a ban mean fame for Pulp and their first single, 'Little Girl (With Blue Eyes)'?

The track fills the A side of the 12 inch (only) single, with 3 other equally strong tracks on the reverse. Each emphasises differing features of vocal and instrumental mix — violin, guitar, bass, drums and keyboards producing the initially slow then often manic Pulp style.

'Little Girl' and 'Simultaneous' concern sexual emotions. 'Blue Glow' is about the loss of a lover and the final track, sung by Russell Senior features Nazis and Neitzsche (wow! — Ed.) as well as a strong South Yorks accent!

Magnus Doyle (Drums) hadn't left the country yet, Simon Hinkler (of now defunct 'Artery') produced at Input. The cover is black and layout appealing, the photo being a multi-imaged affair.

I liked it first time round (?), and after numerous plays it is, in my humble opinion, one of the most pleasing packages I've laid hands and ears upon for quite a while.

Every year, at least one great single gets lost in the Christmas rush. Pulp are the latest victims, but their record 'Little Girl (With Blue Eyes)' deserves the attention it's still getting. A quirky, fragile crooner with a deceptively smooth lyrical bent — courtesy of one Jarvis Cocker — 'Little Girl" could be the start of something big. No radio play, due to rather "adult" lyrics, but a record to cherish as the group begin to grace the stage again after a year long reappraisal or their talents.

ALREADY MENTIONED in dispatches but deemed more than worthwhile singling out for special mention by dint of its generally recognised quality, is Pulp's new single, Little Girl (With Blue Eyes) And Other Pieces out now on the Fire label.
The title track involves some tough talking on matters macho, disguised as an epic ballad in the Scott Walker tradition. While the flip features three further examples of the fivesome's orchestrated and mournful weirdness. 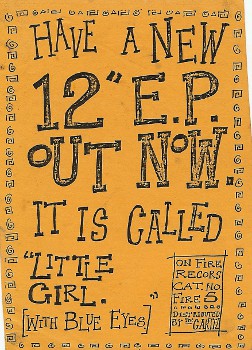 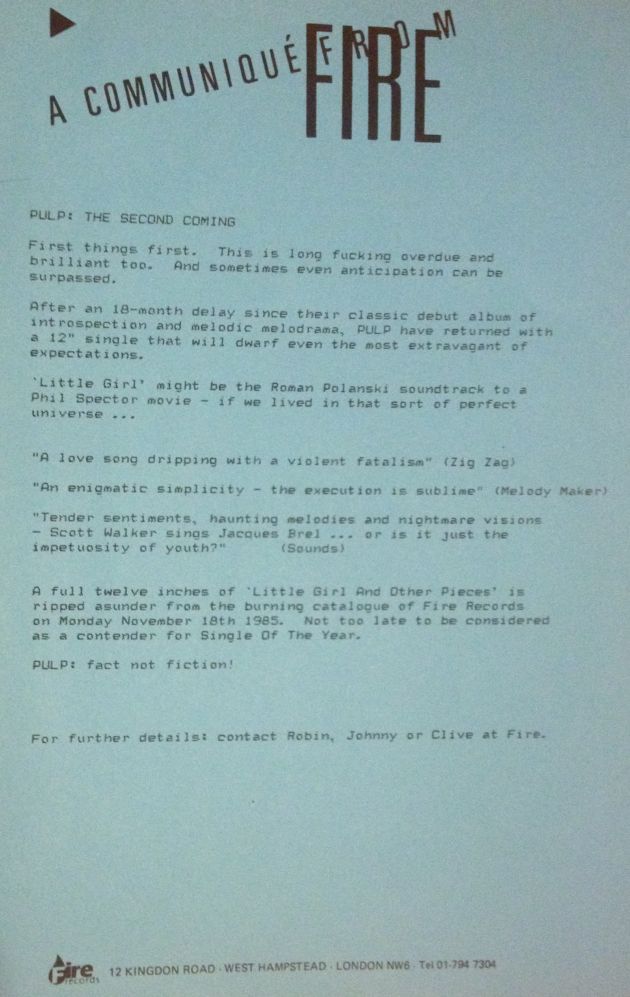 Retrieved from https://pulpwiki.net/Pulp/LittleGirlWithBlueEyesSingle
Page last modified on March 21, 2016, at 08:03 PM