Video footage exists. Some of it has been released as an extra with the documentary film, The Beat Is the Law, Fanfare for the Common People, which was released on DVD in June 2011. It features 10m 29s of footage, including complete renditions of Separations and Countdown. In addition, the film itself includes excerpts from Babies and Separations. The recording is credited to Tony Rayner.

Also, the TV Madness section of the Hits DVD includes a brief clip of Death II, apparently from the same source. 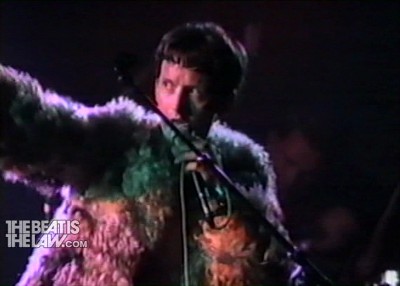 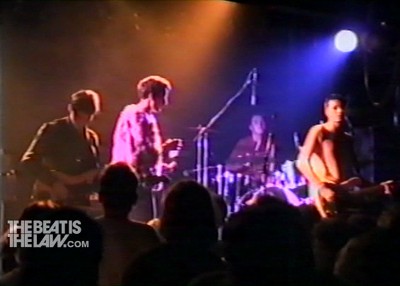 Encouraged by the modest national profile attained recently by Pulp, The Dylans and The Suncharms, Sheffield's Leadmill is promoting a series of 'showcase' gigs, in a dual attempt to fill the traditionally fallow Sunday evening slot, and act as a catalyst for what some believe to be a nascent Sheffield 'scene'.

Beneath large silver balls dangling from the rafters like a Vision On planetarium, PULP arrive to a packed house of seasoned Cocker watchers. Looking like a poodle in a stunning fake fur jacket, Jarvis performs an implausibly cool behind-the-head Stylophone solo, and it's immediately obvious that Pulp's recent surge of activity has produced startling results. No longer just a quirky band with 'potential', tonight was the moment when the years of promise were consummated.

Russell Senior's electric violin is laced with more drama and irony than a camping holiday with Nigel Kennedy and Mark E Smith. As Jarvis croons in the sublime encore, pipe-cleaner legs flicking out like an anorexic Tom Jones, "Woke up this morning. I was still alive". There's a hell of a lot of people who are very glad about that.