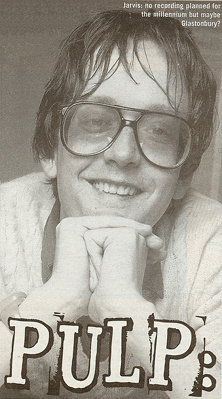 Jarvis Cocker has spoken exclusively to The Maker about Pulp's new songs and the band's future.

Pulp are currently writing and demoing "very badly recorded songs on cassette", according to the Pulp singer. There are no plans for any concerts or releases in the near future. But fans will be happy to learn that sex is still occupying Jarvis' songwriting!

He said: "We're just going to record some songs and see what they sound like. If we think they are fit for human consumption, then we'll release them. Otherwise I'll just listen to them in my bedroom. I quite like them. They are quite gentle.

"'This Is Hardcore' was like the end of one particular road. It was the type of thing where there was nowhere to go. Like we said on the last album - 'What do you do for an encore?' The only thing would be to go a bit more basic, and I think it is a bit more basic."

The Pulp frontman also revealed the low-down on a couple of new songs of which he's particularly hopeful.

He explained: "There's a song called 'The Birds In Your Garden'. All the songs we played in Edinburgh [at the recent Flux Festival] I really like. I don't write words until the last minute so there's not many titles. There is one called 'Darren' - that's quite good.

"I'm not sure what it's about yet, I've not written all the words. But I know it's called 'Darren'. 'The Birds In Your Garden' is about somebody who is wondering if he's going to sleep with a girl or not. So he goes into her garden and all the birds are singing these obscene songs and saying 'Get in there!"'

But Jarvis refused to tell us whether the character in the song gets to sleep with the girl. "I don't want to spoil the surprise," he explained.

There is no album or single pencilled in for next year, but Jarvis admitted that there "ought to be". He was also clear that Pulp still have a future and remain a close-knit group.

"We are close, yeah," Jarvis told us. "But you can't tell what's going to happen. It's been about two years without Russell [Senior] now. I think the first rule is that you have to get on with people in a group. It's like being in a family. You don't always get on with your mother. You accept it."

The only real question for Pulp is what exactly Jarvis will be trying to say to his fans this time around?

"I'm trying to work that out at the moment, I suppose, because I don't want to make a big proclamation. Songs are about small things rather than a big massive thing. It will just be a little secret about things that happen to people, not a big momentous event. Real life is not like that. I think little things are important. Sometimes it seems to make sense, other times it does not."

Finally, The Maker asked if Pulp might be in the running to play Glastonbury 2000.