Most of the press clippings below are sourced from the first Pulp Scrapbook. It is often unclear which publication they originate from: add details if you know.

You'd better look over your shoulder, because Jarvis Cocker is watching you. He's watching everybody, taking note of all the little idiosyncrasies and petty insanities that pass as 'normal'. Jarvis is the mainspring of Pulp, another band you've probably never heard of. Not their own fault, mind, Pulp's crime is that they choose to be slightly unclassifiable, an awkward little peg that won't fit into any convenient indie-pop/rock/art/folk round hole. This is of course no bad thing....

"Hey we're all freaks inside" says Jarvis, and it's this concept (oops! Dirty word! ) of 'freaks' - "They're just normal people gone a bit wrong, that's all. Something happened to them and they never got over it" - that permeates Pulp's more recent material. Tales of the emotionally blighted, the bitter, the twisted, some of them sad, some of them evil, some of them stuck somewhere between the two. Jarvis knows them all and sings them all in his best Lenny Cohen meets Bing Crosby voice. OK it sounds a bit pretentious and I suppose sometimes it is, but that's a risk taken by any band that tries to step over the accepted boundaries and do something out of the ordinary. And Pulp, with their violins and flutes and wheelchair and steam organ smeared liberally over the standard guitar/bass/drums, are doing just that.

From their beginnings in 1983 as an unassuming pop band whipping up a frothy mixture of Simon and Garfunkel and Felt and Jazz-Butcherishness and even Rodgers and Hammerstein (check out 'Love Love' on their gorgeous 'It' mini-LP, it sounds like a show-stopper from 'Oliver! or something........) to create lovely wafting songs like 'My Lighthouse' and 'There Was...', Pulp have progressed through numerous line-ups and numerous tunnels to something much darker and menacing - their music teetering from sweet Lou Reedy tunes through feedback-soaked discord all the way to Euro-disco on their next single (if Fon ever decide to release it), the charmingly-titled 'Death Comes To Town'. It's an uneasy cocktail, permanently ready to curdle into unappetising stodge, but somehow Pulp manage (usually) to get away with it through their innate style and ravaging, acidic self-belief. Seven years of various Pulps playing to enthusiastic audiences of mainly devoted fans in their native Sheffield , but anywhere else? Nothing. They need that self-belief: they are good and they know it and I know it but when so few others seem to realise.... It would be too easy to give up...... So Pulp soldier on in their intrepid wayward brilliance.

And the Pulp live experience is something special too: there they go boldly not fearing to tread the boards of the dreaded 'art' circuit with costumes, stage props (such as Jarvis' wheelchair which he used to appear in whenever the fancy took him), lights, films, no whipdancers, mind, but I'm sure they'll pop up soon. Pulp create an environment and suck you into their own twilight world of dark streets, high rises, naked emotions and barely-controlled madness. In the same way as the twisted visions of the early Fall made you reconsider what was going on around you, Pulp will force you to think again........

PULP records you will enjoy...

PULP'S new album was recorded a year ago, but has only recently found its way onto local record shelves.

Called Freaks. It fuels the Fire dispute rumours (sorry) and the theory that the group and their label are no longer seeing eye to eye. And much of the delay was caused because Input Studios quite rightly refused to release the master tapes to Fire until they were paid for.

Since then Jarvis and Russell have parted company with the rest of the band, and Candida has left and returned to the fold.

But the album has now seen the light of day, and is a statement of Pulp then if not necessarily now. It is a claustrophobic album, prying on the fears of so many of us and littered with disturbing imagery, vocals and sounds.

It's an album that attempts to peer into the darkest corners of the mind, searching for weak links in the mental armour and wiggling into the subconscious. And having done that much Pulp's attempts to explore new musical avenues become much easier, and their pumped organ and ralchety violins sound somehow appropriate in this context.

The band are said to have developed a new sound in the last few months and have recruited Jass drummer Nick Banks and Steven Havenhand on bass. They will be be playing at The Limit on Tuesday. 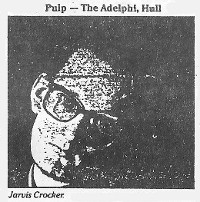 The Wonderful World of Pulp

In the melange that is British independent pop, originality remains obscured under a welter of puerile copyists.

It would appear that originality, or any other positive quality, is not one of the criteria your average indie-person will bother to apply: re The Soupdragons'/Primitives' success.

Originality revolves around reminiscence, never merely reflection; how to use what has gone before to create something different.

Pulp, amongst other fine qualities, have originality. They have taken their influences (not simply musical) and have reinterpreted to create anew.

Luscious music, interspersed with discord, is how Pulp continue to carry on a tradition that was once simply 'The Song'. 'Suffocate at night', 'Going back to find her' and 'Love is blind', for example, are sublime in tone and texture, portraying a fractured landscape" Pulp rupture your sensibilities.

Along with a few others, they provide an antidote to the current strain of candy floss combos infecting the current indie pop scene. They may find survival difficult yet they should endure as recognition cannot be far away. Fingers crossed.

I've now seen the 'new' Pulp more times than the last one, and they get better every time. The violent Magnus/Manners Pulp was brilliant, but that has passed, live for today. Nowadays? Less or more violence? I'm not too sure... I used to think less, but sat in the studio the other day, this Pulp seemed barely removed from the old one. The angriness is still there, but more frequently softened by a more comfortable rhythm. They 'rock out' with "My Legendary Girlfriend", and then it's back into some East European asylum for "rattlesnakes" But listen to "My First Wife", it manages to combine both styles... probably my fave of the new songs. They are now recording for Fon ("Don't You Want Me" and "Rattlesnakes" are already 'in the can'), and records shouldn't be too many months away. Live... red globe, car crashes, bubbles, pretty colours, lights are now part of the experience. The thin line between brilliance and insanity is being trod upon, is Cocker a genius or a freak ?

Dave Taylor: "Pulp strike me as a really special band, I mean they've been going for five years and hardly sold a record. They should have a higher profile, because they deserve it."

Amrik Rai: "I'd be interested in Pulp if they could make a classic garage Scott Walker track."

Ogy McGrath: "Jarvis is a star. There's no reason why Elaine Page doesn't cover his songs for her Christmas album."

I meet Pulp in Jarvis' mother's home, where they practise in the garden shed. The well-meaning but deranged family pet, Bonzo, is hurtling uncontrollably around the room, and a member of The Mission is having his tea in the kitchen. A typical day.

"We're a big influence on The Mission," says Jarvis. and he might not be joking.

They're currently trying to negotiate a move from Fire Records to FON in order to release the single Don't You Want Me Anymore?/Rattlesnake.

"Dave Taylor's spent more on pizzas for us than Fire ever spent on our promotion" says Russell.

"Eastern European folk music is our biggest influence," he admits. (They're not joking about this either - a 'top' Yugoslav producer wanted to work with them and they've been banned in Romania).

"You can dance to our music, but it's easier if you're a cossack."

Pulp are deserving of your attention. I saw them at the Leadmill a few days later, and they were as splendid as ever.