Oh, children of the future - conceived in the toilets of Meadowhall - to be raised on cheap corn snacks and garage food.
Rolling empty cans down the stairwell. Don't you love that sound? Like the thoughts of a bad social worker rattling around his head...
Trying to remember what he learned at training college...
"Mester said you wasn't allowed in here - so why don't you get lost?"

And if you're good then when you grow up maybe you can live on Kelvin. Yeah, you can live in Kelvin. On promenade with concrete walkways, where pigeons go to die.

Oh God, I think the future has been deep fried, deep fried in Kelvin. And now it's rotting behind the remains of a stolen motorbike. "I never touched it, honest, but there was nothing else to do."

We don't need your sad attempts at social conscience based on taxi rides home at night from exhibition openings. We just want your car radio and bass reflex speakers. Now.

Suffer the little children to come unto me, and I will tend their adventure playground splinters and cigarette burns, and feed them fizzy orange and chips, that they may grow up straight and tall, that they may grow up to live on Kelvin.
Oh yeah, we can have ghettos too, only we use air rifles instead of machine guns - stitch that. And we drink Diamond White.

In the end, the question you have to ask yourself is: are you talking to me, or are you chewing a brick?

The lyrics refer to the Kelvin flats, which were a high-rise council housing estate built in the early 1960s in the Walkley district of Sheffield. They comprised of a large 13-storey block containing about 1000 flats in total. Like the better known Park Hill flats, the design was based around the idea of "streets in the sky". This was in the form of four long and very broad walkways, which the flats' front doors opened on to.

The whole complex was demolished in the early 1990s. In the years leading up to this, the flats had become increasingly dilapidated. As the area became less desirable to live in, many people inevitably left, leaving behind predominantly the most poor and socially excluded. In part because of this, the estate became associated with crime and other social problems. 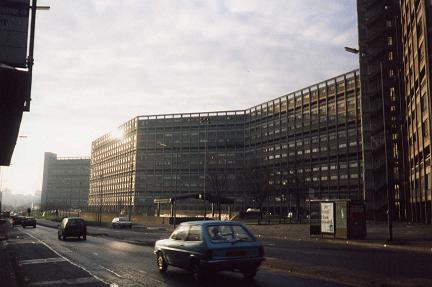