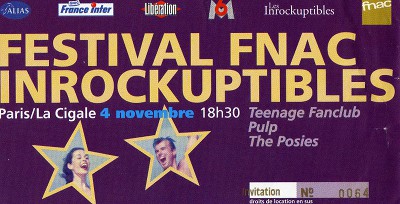 Reasons for an Earful

Herewith some reasons to love Pulp - should you need telling. Tick off the ones you like, and bring your checklist to a forthcoming Pulp gig for purposes of comparison.

(A) Pulp understand that the minutiae of our dreary little lives, at the instant they occur, surpass in grand passion anything essayed by Bogart and Bacall in their most shining hours. Retrospect will damn us to mundanity, but retrospect can stick it up its past.
Hindsight has no place in Pulp's world. Not when there's the fever of the moment to be dealt with and succumbed to.

(B) "Babies" sounds like-New Order. Kinky juvenilia set to sex doom disco.
I never noticed this before. A few seconds later, it sounds nothing like New Order at all.

(C) With this exception, every song Pulp play tonight resembles only other Pulp songs. This means that Pulp are unique. Uniqueness is a rare commodity, but not valuable of itself. Pulp are unique and brilliant. This is almost unheard of.

(D) Jarvis Cocker is a truly bizarre frontman. He twiddles he mic over his head, an awkward snake-god rolling Plasticine. He poses as if he were gorgeous; ergo, he is. He speaks to the crowd in halting, literal, but correct French: "Je suis un peu malade." [" Awwww!" ] "Mais j'éspère de vous plaisir." ["Rayyyy!"] "Voici un chanson joli et lent." ["????"] "Ce s'appelle 'Razzmatazz'." ["RAYYYYY!"]. As with many good bandleaders, his movements create the illusion that every switch and change in the music comes about of his volition.

(G) Jarvis writes lyrics like "Hey! You with the Jesus sandals, would like to come over and watch some vandals?"; which, placed in the context of a song called "Joyriders", is pretty damn hilarious. He also writes lyrics Iike ''"I don't care what you're doing / I don't care if you screw him / Just as long as you save
a bit for me"''; which, placed in any context whatsoever, is pretty damn painful.
He doesn't feel the need to constantly stick an elbow in your ribs.

(H) Albeit he sticks his elbows just about everywhere else.

(I) Even though last night's stagedivers were the most polite and demure I have ever set eyes upon - they clambered apologetically up on stage, studiously avoided the band, and fell gently into the waiting crowd, taking great care not to jab anyone with sharp body parts - Jarvis still sternly disapproves:
"We never get this sort of behaviour at our gigs. It's totally inappropriate."

(J) Tonignt, there are no stagedivers, and Pulp play a much better show.

(K) Pulp are now including in their live set the material which will make up their forthcoming album. It's in the same superb mould as their Gift singles, and naturally includes such characteristically Pulp titles as "Pink Gloves", "The First Time", "Have You Seen Her Lately?" and "Your Sister's Clothes". This last is known among band and crew as "Glass", as it reminds them of the work of Philip Glass.
Wrongly. 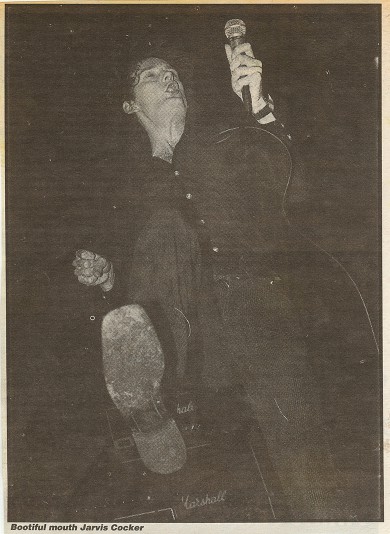 [...] and PULP are dusting down their Christian Aid attire, while Jarvis Cocker attempts to remember what little French he learned at school.

Come their appearance, he does rather well. "Merci bien," he booms between each song, excelling himself with his recollection of the phrase "un chanson nouveau", which precedes new single 'Glitter Babies' (a treat) and 'Joyriders', an impeccably enunciated crawl through suburban Sheffield in which Jarvis sings "Hey you, you in the Jesus sandals / Wouldn't you like to watch some vandals". Despite the language gap, and the fact that Pulp's limited technique can lead to worrying proportions of their set sounding like disco-skiffle, the crowd adore it all.