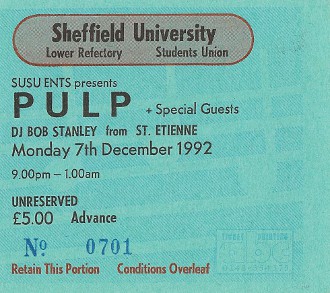 It hasn't been a great year for the pop iconoclast. For most of '92, prime movers from Ashcroft to Robinson have defined themselves by the standards and behaviour of other, earlier icons. These earnest understudies have known their roles too well, every devilish pout bearing the scent of a Bowie or a Jagger, every musical statement bearing the hallmarks of one of pop's students, rather than a catalyst for its change. Meanwhile, in print, fawning little boys have reinforced their excesses, somewhat ironically falling victim to the stifling conservatism that their own predecessors sought to condemn.

Against this cosy, bankrupt backdrop, Pulp's Jarvis Cocker is the only honest performer of them all. He constantly seeks to ridicule the notion of the modern pop star as a figure of any genuine importance. This master parodist realises that the old, Seventies notion of the pop star (as sexual threat and provider of earth-shattering outrage) is all but irrelevant and, quite rightly, sends it up. Like Jagger (or Anderson), he is naturally lewd but in a way that suggests incompetence rather bravado. When Jarvis Cocker (the name, incidentally, is real - it had to be) grabs for his crotch, a la Jackson, it's not masculine exhibitionism. He's just making sure there's still something there.

This naked deficiency/soul-bearing extends to his songs. Who else amongst today's impotent heroes would have the gall and humility to write about the ultimate male taboo of premature ejaculation? ("Countdown"). Who else would introduce "Sheffield Sex City" as "A song about how sexy Sheffield is" with absolutely no conviction? (Sex is obviously minuscule in his experience). The man is heartbreaking!

I should mention that Pulp's songs are full of sleaze and swagger and all that other stuff that liars and journalists claim are present often but aren't. Yes, I do worry that there's a vague World Of Twist "too clever for the kids" vibe here BUT tonight the kids are impersonating Jarvis. Henceforth, I confidently predict that 1993 will be the year Pulp hit the charts and Jarvis will rise to his podium. After all, rather the pathos and panache of the parodist than the furious flash of the fraud.