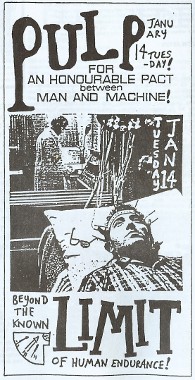 VERY SHEFFIELD. this. A perfect microcosm of its peculiar swing: art on the thread-barest shoestring, the maximum expression for the minimum outlay. The manifestation is a stage wrapped up in tinfoil as neatly as the Sunday roast. Pulp have come to cook their goose; we've all come to have a gander.

I saw them once about five years ago when they were gawky adolescents, cherub featured, plucking nervously at second-hand guitars with an . assurance that went beyond their years. Times have changed and pop music has deflated to a soggy, sticky globular mess like a failed souffle. What solutions can Pulp offer?

Firstly, their visual impact is calculatedly odd. A guitarist with a glassy stormtrooper stare that suggests he might shoot first and sell you a single after - indeed, he has ways of making you listen. A singer togged up like some perverse version of Sebastian Flyte (Brideshead Destroyed?) resplendent in an ancient wheelchair; a keyboardist who never looks at the audience.

On a musical level, 'eclectic' is far too easy and fashionable a word to casually proffer as a description. Pulp's quirky unknown quantity amounts to what could loosely get titled as New British Folk. Obvious reference points spring forward like a Velvet Underground violin or a '60s beat-bopping organ. Comparisons to early Fall and Orange Juice also float in the distance.

But, all this aside, Pulp are faithfully demonstrating another Sheffield trait -taking an idea and hammering it to death. To a pulp even. They shoot out to the oddest extremes, from '60s Tupperware kitsch to '80s country and western on Supplementary Benefit. Another indulgence is the most ridiculous breathy crooning, with all the corpse-like sickliness of a post a-pop-calypitc Frank Sinatra.

Pulp are simultaneously naive, esoteric, exasperating, barabaric and boring. One voice from the back shouts "More?" as a rhetorical question. Rhetorical questions, as we know, are not meant to be answered.