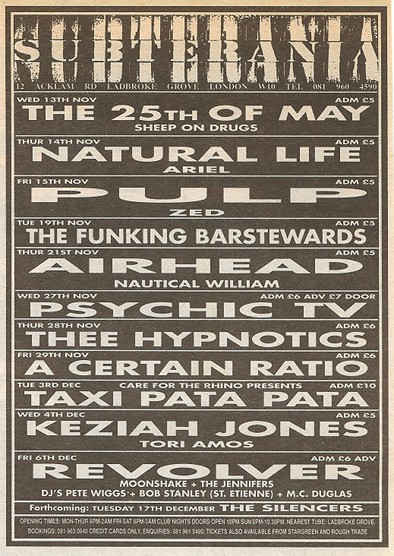 [Over Space intro...] "Hello there. Yes, we're Pulp, I can't deny it. We're here to play you a few songs. Now the first song we're playing this evening is all about a little journey we went on quite recently, we went for a ride in a space shuttle and we went into the furthest reaches of space. We went through the Van Allen belt, we saw asteroids, we passed beyond the reaches of the solar system, and to places where there was no atmosphere, we were looking to make contact with other life forms, but then we decided to come home. We thought, well, space is all very well, but it's nothing compared to west London..."

To hell with careful qualification, Pulp are magic and Jarvis Cocker is a star.

Pulp have a curiously hybrid funky drive behind a dozen excellent pop tunes, imagination and wit enough to have invented pretty much their own aesthetic, and the good grace to want to slap a smile on every face in the place. You might want to argue that the music's been recycled, but if it has been, this is style with its handle-bars bent and the front wheel thrown away, careering off on its own favourite nostalgia trip and knocking off Barry White, Isaac Hayes and the golden days of The Human League on the way.

From tonight's opener, the stylophone-led instrumental "Space", to the gloriously cheesy Brighton pier-style keyboards that bleep and bubble throughout, and the appearance of a violin sound fit to grace any fifth-rate Romanian hotel dining room, you gather that, sure, Pulp are taking the piss. But it's out of the idea of performance, of the corny glamour of the whole showbiz thing, not out of the music itself. Pulp are not a bunch of cabaret clods with a fondness for the kitsch and the campily cute, they write damned fine pop songs which they choose to deliver with a nicely mocking sense of occasion.

They are led in this by Jarvis, a man whose sartorial sense is as stunning as his impeccable taste in techno-pop. Fascinatingly thin, he is dressed tonight in a fake denim bomber jacket with cutaway sheepskin lapels, and swivels dramatically about in perfect groin-jutting parody of every lurv god who ever whispered seduction down a mike. Except that with song titles like "Separation", "Love Is Blind" and "Don't You Want Me Anymore", Jarvis marks himself as something of an Aberfan mining disaster in the field of sexual relationships.

Pulp-appeal is undeniable, though, and there's a Lushette grooving down the front, so there must be something in it, right?

"Pulp is... wearing suede trousers with nothing on underneath... doing a wheelie on a Raleigh Chopper... going to the supermarket in a lurex jumper... being very knowledgeable about antique glass..."

The small yellow brochure placed strategically around the venue lists 44 Pulpish things to do, and it doesn't even scratch the surface. When Pulp take the stage they bring with them a glut of possibilities.

We have a bass player in a turtle neck sweater and a haircut that has no rightful place in this world. We have a guitarist, Russell Senior, who looks like all the Velvet Underground crossed with David Byrne. But floating above all this is the religious experience that is frontman Jarvis Cocker.

Jarvis wears clothes so unfashionable his body seems to be revolting against them. His jacket looks like a sheep turned inside out. His jeans travel so far up his back they form a relief map of the lower part of his body (hubba!). He dances with the same graceless beauty that Nicolas Cage displayed in Wild At Heart - all karate kicks and hand-chops. And he's forever pointing at something.

Visually, Pulp are so fascinating that it's a shock when your mind returns to the music. They are The Fall in Las Vegas with the added bonus that Jarvis unlike Mark E Smith can form whole sentence. Space features Jarvis on stylophone sounding suspiciously like My Bloody Valentine. Separations opens with Fiddler On The Roof style grief from Russell's violin and then switches without warning to Candida Doyle's playschool synth (which, in technological terms, seems one step up from the stylophone).

At a time when you'd require more than Vicks Vapo-Rub to keep up with the current bpm rate, Pulp are a flaming spaceship returning to a time when dancing wasn't just exercise with cigarettes. They are such a good time you might just die watching them.

And Jarvis Cocker, in case you missed the clues, is God.