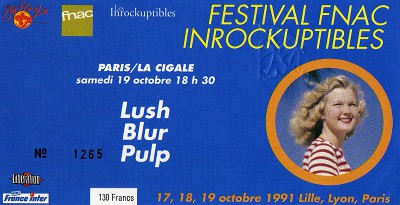 France Inter was available on FM, but unfortunately the only recordings of this in circulation originate from MW/LW frequencies.

Two other versions exist, one apparently originating from the pre-broadcast master recording, and an audience recording. 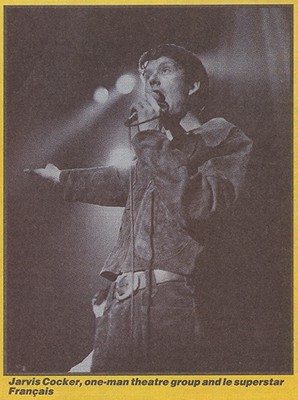 Between songs Jarvis has his own spontaneous stand-up comedy act; mumbling hilarious asides which, sadly never translate into print. You really had to be there... Or rather here, in seedy Pigalle, Paris - where Pulp are doing a three day festival stint supporting Lush and Blur (the other half of the annual Les Inrockuptibles festival).

Pulp aren't used to being treated with god-like respect or hanging out with fully-fledged pop stars. They wander around backstage confused, vulnerable and disoriented. Post-gig, Russell wanders through the Locomotive club in shades, Jarvis is surrounded by adoring fans on the dance floor and Steve is the lucky recipient of a round of drinks bought by New Order's The Other Two.

But if this isn't strange enough, there's an even weirder revelation tonight... that Pulp are Serious People. Seriously serious. Jarvis is worried they're becoming perceived as some sort of novelty act. As the only surviving member in over ten years of fragmented, erratic Pulp activity, he's determined not to become an all singing/comedy sideshow.

It's a fair point, Pulp are more than just a kitsch curio. But even so it's still difficult to take Pulp too seriously because, apart from 'proper' pop songs like 'My Legendary Girlfriend' (an NME Single Of The Week earlier this year) and 1985's 'Little Girl With Blue Eyes', they are the worst - in the most complimentary way - most tacky '70s disco music outfit of the '90s.

Pulp are almost theatrical. Jarvis sings with adopted character emotions, most noticeably when he does his virgin sexy bit at the end of 'My Legendary Girlfriend' when he becomes stuttering Billy from One Flew Over The Cuckoo's Nest. Most of Jarvis' lyrics are about love. In Squeeze-ish story form. With titles like 'She's A Ladee' and 'Don't You Want Me Any More' - a cunning mix of Soft Cell, Bacharach and Human League - they're thoroughly entertaining. People are dancing, or crying with laughter, others stare in bewilderment at the weedy Englishman and his wayward French accent.

If anything, this festival proves to be Pulp's most difficult examination yet: touring with two established, cool indie bands and in front of an audience distanced by a different language. But Pulp don't even see the hurdles - Jarvis' pidgin French and Elvis moves transform him into a hero. By the end of the evening the French love him. VIVA PULP! 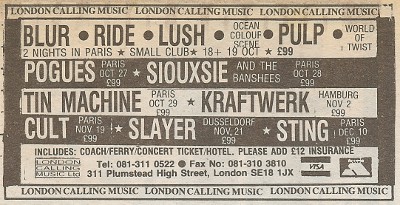