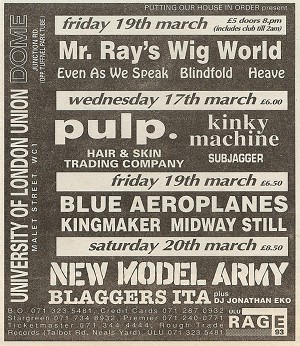 We demand a real star. One with the spirit of Morrissey and Mark E Smith in his lyrics and Elvis, Jagger and James Brown in his hips. Jarvis Cocker, 29, from Modestly Bonkers Street, Sheffield, will do. His imagination pecks over provincial town one-to-one dramas while he wriggles and struts in a way that makes Brett Anderson look geriatric. His high-fibre synth pop, epitomised by the coming-of-age glory singles 'Babies' and 'Razzmatazz', is as English as Rich Tea biscuits. Plus, his penchant for '70s tackerama is the most bearable around. After ten years in the making, the Cult Of Jarvis is hereby officially born.

An incomplete audience recording exists - the last four songs only.