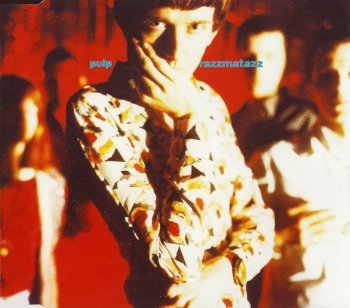 Razzmatazz was Pulp's final single for Gift Records and peaked at #80 in the UK singles chart, despite critical acclaim.

All the tracks on the single were re-released within eight months by Island Records on their Intro compilation.

* Did not appear on the 7" version

Razzmatazz
...the bits that "Hello" leaves out

Inside Susan "A story in three songs..."
...following Susan from her Rotherham puberty through wild teen years in Sheffield to her eventual marriage and settling down somewhere on the outskirts of London.
I played these songs to Susan the other day - she just laughed and said I was being spiteful because she wouldn't sleep with me when we first met. She also said to tell you that she's perfectly happy where she is at the moment, thank you very much.

I had some problems with the initial mix - it sounded a little A Flock Of Seagulls-like, so we remixed it with Phil Vinall early in '93. The B-side, "Inside Susan", was a story in three songs, done under our own steam. You follow this character from early adolescence through to early thirties and married to an architect somewhere in South London. The last part, "59 Lyndhurst Grove", was inspired by a party I'd been to the weekend before. We were thrown out by an architect but I got my own back by writing a song about the event. It was a really crap 'right on' party - there were children there. You don't take your children to a party in my book. I sent a copy of the CD to 59 Lyndhurst Grove, the lady of the house, because she was in a bad situation married to this prick, but she never wrote back. A Japanese fan went there and stood outside and asked if she was Susan!

PULP ON THE RAZZ WITH SAINT ETIENNE

Pulp are becoming a regular phenomenon. Peel back the diverting layers of bri-nylon and crimplene, quit chortling at the wry, Bennett-esque (Alan, not Gordon) observation comedy of Jarvis' words for just one moment, and allow yourself to recognise a classic English singles band in full effect.

Two Melody Maker Singles Of The Week ("O.U" and "Babies"), a gratifying No. 11 slot for the latter in the NME's Singles Of The Year, and now a third all-time-favourite-song-of-all-time in the making, "Razzmatazz".

A stalwart of recent live sets, beginning with the classic couplet "the trouble with your brother, he's always sleeping with your mother", "Razzmatazz" is Pulp's third gem for Sheffield's own Gift Records, and is released by the label on February 15.

As well as "Razzmatazz" the discerning punter also gets for his/her shekel Pulp's latest slice of audio vérité, "Inside Susan: A Story In 3 Songs". As you might have twigged this 12 minute rollercoaster of suburban pubescent shenanigans comprises 3 songs, "Stacks", "Inside Susan" and "59 Lyndhurst Grove". Presaged by the steamy confessional of "Babies" b-side "Sheffield Sex City", "Inside Susan.." flings together trainer bras, the smell of rabbits and hidden love bites in one unholy mess of hormones on red alert.

To coincide with this mighty release, and to further nuture the notion of Pulp as the Cool Bands' Cool Band, the group will be touring with Saint Etienne through the latter half of February into early March. 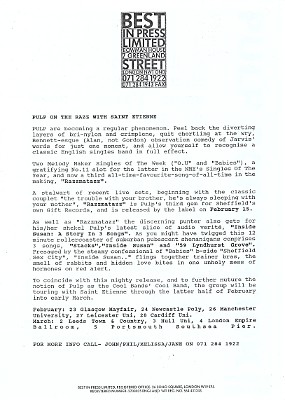 SINCE the Seventies have now officially ended, what with Bill Grundy dying and Huggy Bear releasing their new record, maybe people are going to start taking Pulp seriously.

Jarvis Cocker, the Anthony Newley of the Nineties, may well have some sartorial affinity with camp retro kitsch, but on "Razzmatazz" he reveals a startlingly effective lyrical deftness that isn't about to hide behind the safety of a tank top and a yarn about how great Flintlock used to be.

The pop rattles bitterly in a thoroughly modern manner, the Kate Moss wannabees stumble on its vicious edges and fall off their ugly platforms.
Meanwhile, the B-side, a semi-linked three parter called "Inside Susan", will shortly be made into an award-winning Mike Leigh directed TV drama.

Pulp have toughened up rather sharpish for the Suede slip-stream after years on the indie fringes, and 'Razzmatazz' could prove timely despite its time-warp '73 ambience. It's tale of suburban ennui is underpinned by lavish early Roxy-style spurts of melody. Mr Jarvis Cocker is ill-equipped to manage them vocally, true, but this somehow adds to the freaky grace of it all.

Nearly single of the week

Now this is pop. Glorious in its life-affirming, all-ecompassing enormity without being void of real substance. Pop irony in full effect. Sick without being smutty, pure without being puerile, Jarvis Cocker takes us through another strange tale of weird sex and pre-pubescent deviance, this time with overtones of malevolent incest and family intimidation. Better than 'Babies' and twice as scary.

Review by Cass Browne and Ben Harding (The Senseless Things)
C: "That could possibly be Single Of The Week. That man has serious f—ing talent. The opening line is a killer, 'The trouble with your brother / He's always sleeping with your mother'. It's a classic and it goes against normal social convention. I mean, it's totally against everything I listen to, against everything I wanna express in music, but I do think music has to have a certain romance to it. Love, I think, is possibly the most romantic thing, but everything from paranoia to insecurity to hate to anger can be romantic, desperation can be romantic, and this record has desperation. It's so individual - you don't hear records like that very day."
B: "It's unique and wonderful. I love it when music does something to my emotions, thank you - thank you for manipulating me. It's the first record that's made me wanna cry."
C: "Don't cry."