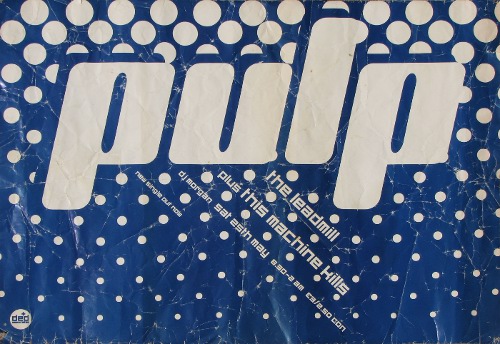 Back in the early Eighties, when few bands were ridiculous enough to call themselves by a one-syllable, four-letter word, Pulp were a local legend. The years passed, Pulp moved on, but their myth refused to fade, and tonight, after a long break and recent resurrection, they're back in the city that spawned them, facing a packed and highly expectant Leadmill.

"New songs?" muses frontman Jarvis Cocker, in answer to an impatient request from the front. "Yes, we've got lots of new songs, just to prove that our creative juices haven't dried up."

"We want juice!" screams one of the handful of women who spend the best part of the night urging the singer to get his trousers off. "Hey" deadpans Jarvis, with a slight twist of his right hip, "we're gonna give you juice, baby."

With a cool bassist, manic drummer, aloof organist and a guitar/violin player who looks a bit like the demented one in Sparks, Pulp are in a world of their own, a world that's been made all the more surreal by two enormous silver mobiles at the sides of the stage. On top of all this, of course, is Jarvis Cocker. Long, lean and dressed in jeans and a minute nylon sweater, he's a true star. Star as in classic entertainer, as in Barry White, Tom Jones and all those other gits who eventually make their way to Vegas.

He's also a great songwriter who, at a time when most pop bands seem so illiterate that you sometimes wonder if you're ever gonna hear a memorable line again, is reeling off songs as structured as Separations or as satirical as Love Is Blind. "Separations" (which also happens to be the title of their forthcoming LP) is pretty central to Pulp, since none of Cocker's characters ever manage to get it together. Instead, we get an entire set of lovers kept apart by illness ("Girlfriend In A Coma"), by death ("Separations"), by walking out the door ("She's Dead") and by never actually opening the door in the first place (the recent single, "My Legendary Girlfriend"), and whose sense of solitude is compounded by the Farfisa and a keening violin.

At times you can hear blatant steals from other songs: "Death II" echoes "Something's Gotten Hold Of My Heart", and on "Don't You Want Me Anymore" there's a glorious parody of Chris De Burgh's atrocious "Lady In Red" with the line, "I've never seen you look so ugly as the way you did that night". But the best bit comes when Jarvis reaches for a guitar and gives us "She's Dead", which resounds with all the genuine tragedy of "By The Time I Get To Phoenix". Someone in these pages once reckoned that "Pulp are the most subversively important pop band in the world, and they don't even realise it". They're about to clue up.