First gig of the Australian tour.

First, the Antipodean context. Pulp are in Australia for the first time. Prior to "Common People", they had sold around nine albums here. "Disco 2000" is their biggest hit. Their first gig is in a laughably tacky, multi-tiered, chrome and glass dome reminiscent of the villain's lair in a cheap James Bond rip-off. And Jarvis Cocker is ensconced in a dressing room emblazoned with the irony-free legend "Star Suite".

Which is only right, if the roar which greets his belated entry onstage is any indication. Sure, ring-in guitarist Richard Hawley attempts some lager-aloft grandstanding as the slow, ominous intro to "The Fear" builds behind him, but the only kids who scream are the ones who mistake him for Jarvis. They're the ones wondering who the chick in the mirror-ball frock is, and how long Brett Anderson has been playing bass.

The point is, Pulp is a brand new flavour for most of this smartly-dressed clientele. Whoever wrote the set list understands this fact and relishes it. This is "hardcore" and, to the palpable annoyance of the 100-odd public radio devotees who remember "Babies" and "Lipgloss", it's very little else.

Not that they're complaining, as "Joyriders" and "Underwear" follow "Do You Remember The First Time?", even if the early tear through Pulp's relatively obscure back pages has Cocker glancing at his wristwatch at least once per song. His dry, Northern banter is engaging ("The reverse magnetism down here is freakin' me, man") and our first real-life exposure to the tall guy's startlingly uncoordinated arse-wiggling and elbow-pointing is a treat.

Eerily echoing Damon Albarn, who stood on the same spot not a year ago, Cocker takes the time to complain about the weather and to note that he has "a bad throat". Good-o. His best story is the one about the note he found earlier in his suite, the one begging him to play "Sorted For E's & Wizz" and signed by a fan's parents, The band obliges, to the vocal relief of the throng.

In less acclaimed manoeuvres, "Seductive Barry" is the first real error of judgement: great for those low-lit, wee-hours whisky binges back home, but way too early and too damn dense for this party. Jarvis shimmies his satin trousers to the stage edge and takes a red rose from an outstretched hand, but his failure to adequately install it in the buttonhole of his brown body shirt is a poetic reflection that the crowd's slipping slowly from his grasp.

The song climaxes with Cocker flat on his back, dry-humping the air. The gesture signals a near-relentless "Hardcore" showcase which keeps the bar staff busy for the next hour, only "A Little Soul" and a truly devastating "This Is Hardcore" lifting the spirits of crowd that almost seems to be waiting for something...

"Common People" takes its unimpeachable place at the end of the last encore, of course, and it's a euphoric event, in a sense the moment where Pulp's first gig in the reverse magnetism zone appears to both begin and end. And, for those who went out and bought "Disco 2000", well, they can always go home and play it after the show. Pulp may have just arrived in these parts, but they've already moved on. 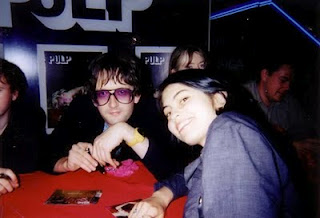 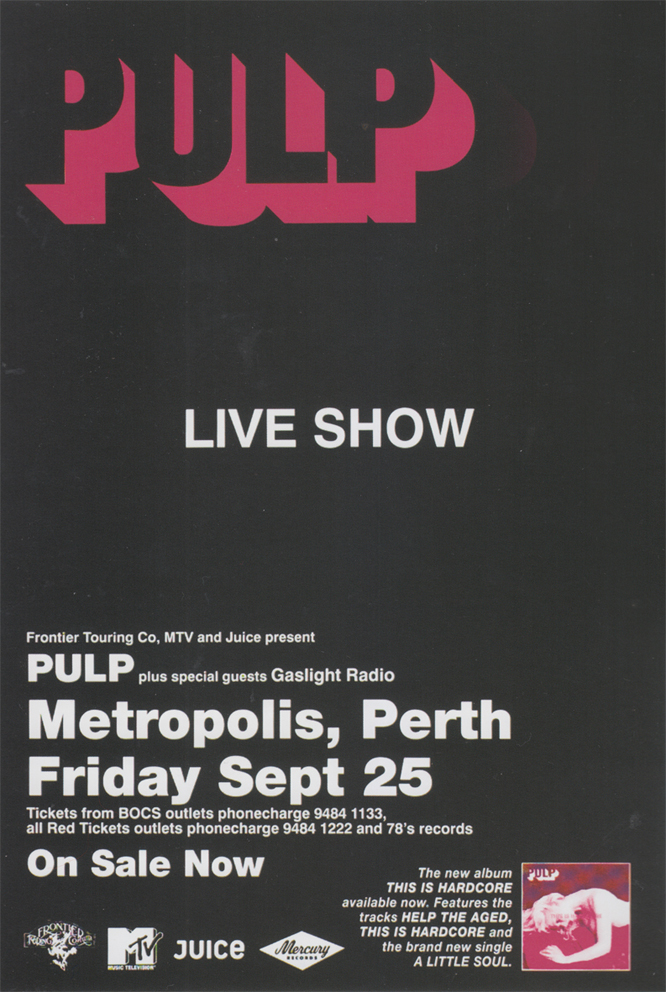 There is an audience recording in circulation.