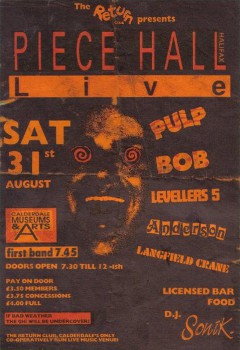 An audience recording exists. There is also a video on Youtube https://www.youtube.com/watch , the Pulp set starts at 48 minutes.

Welcome to the otherworld. Halifax, deep in the Yorkshire moorland, is the north's equivalent of the Forgotten Planet, a fearsome anachronistic hell-hole where middle-aged women roam in packs and "American" cafes have their names spelt in French ("Cafe Americain"). For one night only, the future(ish) comes to town, in the form of a nicely adventurous quadruple-biller in the courtyard of the ludicrously designed Piece Hall.

Unquestionably, the real stars of the evening are glamsters Pulp, who arrive kicking silver footballs into the audience and exuding dry monologues about going to space. Rooted firmly in Seventies tack and early Eighties electronic disco, they're like a camper, weirder World Of Twist, shot through with vivid, deadpan humour and famously distorted echoes of Barry White and Van McCoy.

Just as every song is an exquisite, intricate melodrama skirting around social inadequacies and personal insecurities, the group themselves have the air of societal misfits whose failings aren't just exaggerated but reflected back at the crowd. Pulp are Stars Pathetique (see also Glitter, Stardust) whose weakness is their greatness. In normal life, singer Jarvis is probably just another skinny wretch with a personality crisis and hairdressing problem, but onstage, in his ludicrous stack heels and fluffy top, he assumes the holy status of a Big Elv. Captivating, excruciating and outrageously (un)sexy, this man has more star potential in his outsize signet ring than Damon of Blur will have in a lifetime.

As Pulp transport us to the spaced-out inter-galactic disco of Countdown and they're shagging (!!!) in the crowd, the thought hits me that this is one of the greatest pop Performances I have ever seen.

Vegas in Halifax. "Top Of The Pops" by Christmas.