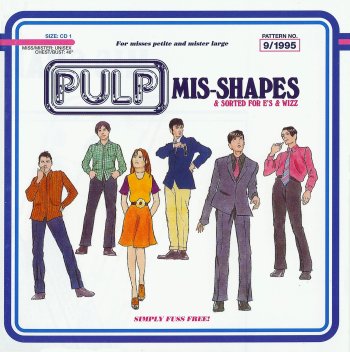 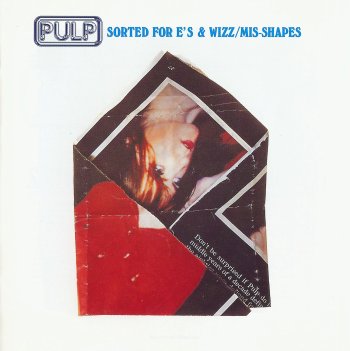 Mis-Shapes and Sorted For E's & Wizz were released as a double A-side in September 1995. They formed the second single taken from the number-one album Different Class. The single was Pulp's second successive number two hit, Common People having reached the same position in June.

The tabloid press stirred up quite a bit of controversy over the drugs references in Sorted For E's & Wizz and the artwork released with it. There were some calls for it to be banned. Most notably the Daily Mirror which ran the headline "Ban This Sick Stunt" and described the single as a "DIY kids' drug guide".

Jarvis Cocker has often stated the song is about his experiences of going to raves in the late 1980s. The song is descriptive and was not intended to take a position for or against the use of rave drugs such as ecstasy and speed ("E's and Wizz").

It was, however, the single's artwork that proved to be most controversial. It featured origami-type instructions showing how to fold a piece of paper into a wrap of a sort that was sometimes used by ravers to conceal drugs. The front of the CD featured a page from a magazine folded into such a wrap. Originally the plan was to sell the CD inside one of these wraps but that turned out to be too expensive. It must be stated that the sleeve did not depict any drugs or suggest how the wrap should be used. It is therefore unlikely to have taught anybody anything they did not already know.

The band seemed genuinely surprised by the reaction and stated that they had not meant the design to cause controversy and that it was simply intended to reflect the theme of the song. There was concern over reports that Radio One might decide ban it. Possibly with this in mind, a statement was released announcing that the sleeve would be withdrawn once the initial pressing had sold out.

We shall fight them in "The Beeches" - and "The Stag" and "The King's Head" if it comes to that.
You know the score - ten blokes with 'taches in short-sleeved white shirts telling you that you're the weirdo.
Fear not brothers and sisters - we shall prevail. Live on.

The summer of '89: Centreforce FM, Santa Pod, Sunrise 5000, "Ecstasy Airport", ride the white horse, the strings of life, dancing at motorway service stations, falling asleep at the wheel on the way home. There's so many people - it's got to mean something, it needs to mean something, surely it must mean something.
It didn't mean nothing.

Jarvis, we salute you!

Yeah. Already, you can see it in their eyes, hear it in their jibes. There are people plotting and planning, growing tired and impatient, implying that the time is ripe for a Pulp backlash. But, in our house, we still worship at the shrine to the Pulp-People (admittedly, a pretty poor shrine: some autographed fan-club postcards, a badge and a pathetic square of Jarvis-suit - but the thought's there, right?). And this double A-side is ace!

"Sorted for E's and Whizz" is Captain Jarvis coming over all melancholic about the rave experience: "In the middle of the night / It feels all right / But tomorrow morning / Ooh / Then you come down."

"Mis-Shapes" finds Cocker easing happily into the role of self-styled leader of "Mis-shapes / mis-takes / mis-fits" - he's a Geek made God. These are anthemic thoughts, though this isn't anthemic music. It's a state of the nation address: "Brothers and sisters can't you see / The future's owned by you and me."''

Top marks also go to "PTA (Parent Teacher's Association)", which goes: "I know I'm getting on / And you're oh-so-very young... Never had a girl before / Because I was too scared to touch the women at Poly." If it's not Pop-Orgasm, then it's at least a joyous, fumbling delight.

Go on, make "Sorted" Number One.

More cod-meaningful drones from the Terylene set. Ninety-five per cent artificial, doncha know? Once Pulp managed to create records that were entirely glitzy, E-fuelled (p)Roxy Music and everything was fine. 'Do You Remember the First Time?' - exactly the sort of question you'd ask someone in the corner of a club, MDMA'd to oblivion - was, for one, a near perfect dash of suggestiveness. But nowadays, alas, things have changed. For Jarvis, the sort of man who goes out so much there's a riot when he's not sighted at a lig, has given up creating soundtracks for nights out and started singing about them instead.

'Sorted For E's and Whizz', the obvious key track here, is, as you know, a narrative about the pitfalls of going out, which ends with Jarv leaving half his brain in a field in Hampshire. An enormous hit, unfortunately. Elsewhere 'Mis-shapes' itself is another rites-of-passage throb with the inexplicable chorus, "We won't use guns we won't use bombs/ We'll use the one thing we've got more of, our minds!" And best track 'PTA' is the tale of underage sex à la The Police's fab 'Don't Stand So Close To Me'. But, and this is the point, even Sting wasn't joking then! Pulp are getting so ironic it's getting ironic!