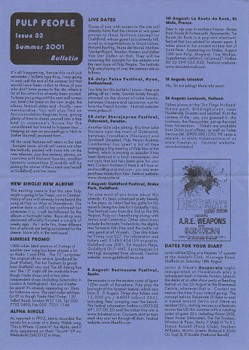 It's all happening, hence this rush job newsletter/ bulletin type thing. I was going to wait until the end or the summer, but that would have been unfair to those of you who don't have access to the site, where a lot of this news has already been posted. To keep you going until the new stuff comes out, here's the latest on the new single, the album, festival dates and - finally - new merchandise. You will also find an Accommodation Register form, giving plenty of time to charm yourself into a free bed in someone's house for the unconfirmed but bound to happen tour... Keeping an eye on proceedings is Nick in (rather blurred!) postcard form...

All the usual features will return in the next, bumper issue, which will come out after the festivals, packed with more info on the new releases, your live reviews, photos, an interview with Richard Hawley, another fantastic competition [Candida will be picking the winner of the current one herself at Guildford] and lots more.

The exciting news is that the new Pulp single is going to be 'Trees', out in October. Many of you will already have heard the song at Hay on Wye or Homelands. The precise date is still to be confirmed but whenever it is, if will be followed by the album a fortnight later. Recording was declared officially finished a couple of weeks ago. As I write this, three different lots of artwork are being considered for the sleeve. More info in the next issue!

1000 white label promos of 3 mixes of another new song has been played a lot on Radio 1 and XFM. The 12" comprises: The original album version (produced by Scott Walker); The Fat Truckers (a group from Sheffield) mix; and The All Seeing Eye mix. The 12" might still be available from Rough Trade shops and a few other independent shops (including Selectadisc in London & Nottingham) - but you'd better be quick! It's already appearing on Ebay for ludicrous sums. The mail order address for RT is: Rough Trade Mail Order, 130 Talbot Road, London W11 1JA. Tel. 020 7792 3490, Fax 020 7221 1146.

As reported in PP33, Jarvis recorded the vocals for a cover of a Jimmy Webb song "This Is Where I Came In", for Alpha, and it duly appeared on their "South" EP on Melankolik [SADD12] in May.

Those of you with access to the site will already have had the chance to win guest passes to these festivals (except for Guildford, whose guest list is already full, sorry) so congratulations to Grant Lomas, Richard Bjorling, Nuria del Moral, Mathieu Tascher-Picard, Marilyn Havern and Esther Van Der Zijden on that. They will be reviewing the concerts for the website and the next issue of Pulp People. The festivals Pulp are playing at over the summer are as follows:

24 July: Paleo Festival, Nyon. Switzerland.
Too late for this bulletin I know - they are jetting off as I write. Sounds lovely though, situated on the shores of Lake Leman, between Geneva and Lausanne, not far from the French border. Festival website: www.paleo.ch

28 July: Storsjoyran Festival, Ostersund, Sweden.
Another lake side setting, this time Lake Storsjon near the town of Ostersund, between Trondheim (Norway) and Sundsvall (Sweden). Pulp Person Andreas Carnheimer has spent a lot of time arranging a big meeting of Pulp fans at the festival, which is proving so popular it has been featured in a local newspaper, and not only that but he's been give[n] his own tent. Contact Andreas if there is still time on [...] - you can even purchase tickets from him!. Festival website: www.storsjoyran.se

3 August: Guildford Festival. Stoke Park, Guildford.
I'm sure most of you know about this already, it's been advertised pretty heavily in the press, so I don't feel too guilty for this actually being too late for it (actually I do). The festival runs from the 3rd to the 5th August, Pulp co-headlining along with James and Catatonia, Other attractions include the fantastic Tindersticks, the slightly less fantastic Kiki Dee and the really not very good at all Wurzels. One day tickets for Friday cost £27. For information and tickets call: 01483 454159 or post to: Guildford Live 2001, 54 Haydon Place, Guildford GU1 4NE. Eurocheques [in sterling] accepted from abroad. Festival website: www.guildford-live.co.uk

5 August: Benicassim Festival, Spain.
Benecassim is on the eastern coast of Spain 120m south of Barcelona. Pulp play the last night of this Spanish festival, which runs from 3 - 5 August. Three day tickets cost 15,000 pts / 640FF (about £65), including 'free' camping near the beach. The festival information hotline is 0033-(0) 491.07.00.20 and the ticket line site is www.ticketnet.com. Concerts start at 4pm each day and run through till 8am. Festival website: www.fiberfib.com

26 August: Lowlands, Holland.
Takes place at the 'Six Flags Holland' theme park, Biddinghuizen, near Harderwijk, Dronten and Lelystad. It's in the centere of the - yes, you guessed it - the lowlands, the Flevopolder, just up the road from Amsterdam. Tickets are available from Dutch post offices, as well as Ticket Service (tel. 0900-3001250, 99 cents a minute, or www.ticketservice.nl or www.theater.nl. Festival website www.lowlands.nl

DATES FOR YOUR DIARY

Jarvis will be DJing at a Heaven 17 concert at the Adelphi Club, Vicarage Road, Sheffield on Saturday 18th August. 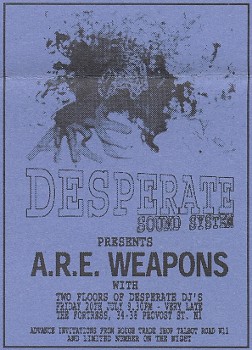 Jarvis & Steve's Desperate night, inaugurated at Homelands plus a subsequent bash in trendy Hoxton, takes to the decks at an after show party at Reading festival on Sat 25 August at the Rivermead Centre, wherever that is. Contact me nearer the time if you intend going. The concept behind Desperate (if there is one) is based around Jarvis and Steve as resident DJ's, visiting venues and festivals across the UK this summer with a rotating roster of guest DJ's, including Parrot (ASI), Dean Honer (I-Monster), The Fat Truckers, Winston & Pipes, Barry 7 (Add N To X), Simon Russell (Pony Club), Nathan Williams, Martin Green, Richard X (Girls On Top) & JP Buckle (National Bandit).

New merchandise at lastl Only three T shirts, but it's better than nothing - we hope that there will be more stuff for the tour. Stock is limited so be quick! P + P is free in the UK for everything, but anyone ordering T shirts from abroad must add £1 per shirt.

Finsbury Park Programme: A5, 14 pages, full colour + 24 round stickers. Includes lots of previously unseen photos from the making of the A Little Soul and This Is Hardcore videos. SALE PRICE £4 / $6 / 40FF

Sun Visor: Made out of transparent red plastic with white leatherette trim and headband. The brim has the 'Pulp' logo printed on it in white. This item isn't in the sale, sorry - £4 / $6 / 45FF

...as usual just write or email me your orders, best to check to see if your first choice is in stock but I will reserve things for you if necessary. Only a limited number of these new T shirts were produced for Homelands - as I said more will be forthcoming but you might have to wait!