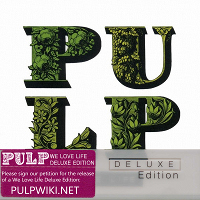 The songs which appeared on We Love Life only tell half the story of the busy songwriting and recording period which Pulp engaged in between 1999 and 2001. Unlike the other albums the band released on Island/Universal, We Love Life has not yet been given a two disc deluxe edition release, which could see the release of some of these unheard recordings.

To help petition Universal Music Group to release the many unreleased songs from this period, in the form of a We Love Life deluxe edition or digital downloads of the individual songs, please CLICK HERE. 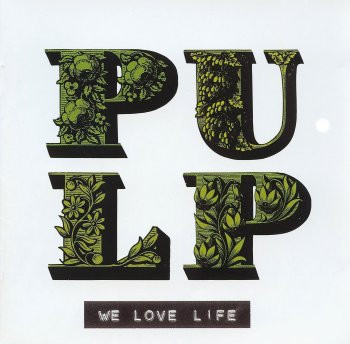 Album Title
In 1999, there were rumours that Pulp's next album would be entitled "The Quiet Revolution" after one of the songs they performed at the time. In 2000, when it became likely that The Quiet Revolution had been dropped, the fanclub told people that there was no official working title for the album. The first official announcement came in 2001 when the fanclub announced that the album would be called "Pulp Love Life" but then it was quickly changed to just "Pulp" because Jarvis thought that the former title may have caused confusion. Promo CDs were issued under the title "Pulp" and radio stations began to talk about it. Following the September 11th attacks, Jarvis decided to change the album title to We Love Life.