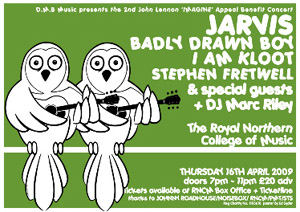 Jarvis headlined with an hour long acoustic set. He was accompanied by Tim McCall who helped out on guitar.

There were also performances from Badly Drawn Boy, I Am Kloot and Stephen Fretwell, plus DJ Mark Riley.

An audience recording was distributed on the Dimeadozen torrent site in May 2009. The recording was made by user "swintonboy" who gave these details about the equipment used:
"Sharp IM-DR420H(S) minidisc and Sony ECM-TS125 mic in LP2 mode -> via analog to Sony CDR RCDW100 -> via EAC to wav -> via Flac Frontend to FLAC. That's the best equipment I have to do this. Sorry."

By swintonboy: Jarvis, accompanied by "Tim" on acoustic guitar, performed this special set as part of the second Imagine charity concert held at Manchester's beautiful Royal Northern College Of Music in the middle of April. It includes tracks from his debut solo album, his forthcoming Further Complications albums, some covers and a rare treat of three Pulp songs.