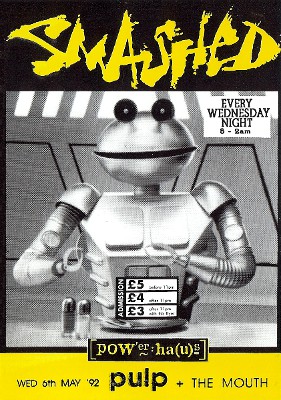 Pulp are the kinda band that make you relive your adolescence. They make sincere sound tacky and kitsch sound sophisticated, and recall your first infatuation, every school disco disaster. They don't reflect such awkwardness, they just provide the atmosphere in which it can blossom. Pulp are pop catalysts and pop idols. Something you aspire to.

The man we all look up to is singer Jarvis. A throwback from the days when a star was your confidant as well as your hero, he's the kinda guy that doesn't have to try too hard. His every move drips with effortless pizazz. When Jarvis mops his revered brow and strikes the Travolta pose, he looks like he's executing an original move. And when he sings like a New Romantic crooner from the early Eighties, you wonder if he has the patent.

And then there's the drama. The songs not only mix glamour and the everyday, they inject excitement into the mundane. They take romantic tragedy and introduce it to the art of the knowing tease. The line, 'Can't stand another day without your love" is classic Pulp, devotion throbbing with understated pathos. The trouble with your brother is he's always sleeping with your mother," is another gem. These are relationships - this is life.

Ultimately, it all comes down to timing. Walking the fine line between theatre and cabaret, Pulp are the considered shrug that speaks volumes. Their oeuvre may be OTT but they have an emotional authority that excuses it. "She's A Lady" sounds like Gloria Gaynor's "I Will Survive", which sums it all up. A band to put a smile on your face and a glow in your heart. Wake up to Pulp.

Beneath the glitterballs and behind the smokescreen, gyrating in a pristine plastic Space 1999 vision of the future. Pulp are the band World Of Twist always fancied themselves to be. Charmed, poised pseudy-dandies with a dash of off-kilter glamour, a rocketship full of celestial discopop style and - God, yes - wit, tonight they expose their clunking Manc copyists as Hawkwind with one trick and a spangly shirt, baggy's ugly brother locked in the dressing-up cupboard. In a very real sense, they're galaxies apart.

Kitsch is rarely as beguiling as this, comedy rarely treated with such high seriousness. There's a keyboardist spraying out fizzy ray-gun effects on a stylophone, a lurching bassist who's close to passing out, and a mad-eyed guitarist/violinist struggling to get either instrument consistently in tune, collapsing together with implausible success. And then there's Jarvis Cocker: deadpan crooner and ace Jimmy Savile impersonator, shimmying and hand-jiving like a graduate from a Blue Peter disco-dancing class. In some synthetic, glitter-dusted future, all pop groups will be like this.

In the past, of course, all pop groups from Sheffield have been a bit like this, with varying degrees of irony. But Pulp, pretty much alone amongst the faddists and the futurists, have survived, releasing records roughly once a decade until this month when, more by accident than design, they've a single and album out soon on different labels. 'OU', the single, makes a galloping, deliciously histrionic showing. Toytown Techno speeded up beyond good sense, until Jarvis is left posed, pointing at the ceiling approximately two inches above his head with all the grandeur and tragedy of an amateur Jesus Christ Superstar.

At least two songs are strutting dead ringers for "I Will Survive', "You Don't Want Me Anymore' is a Toytown tango spooked and stretched to blowzily dramatic extremes, and the final 'My Legendary Girlfriend' is an intense, ecstatic marathon that renders all other music, for a perfect ten minutes, utterly redundant.

Top entertainment, in other words.