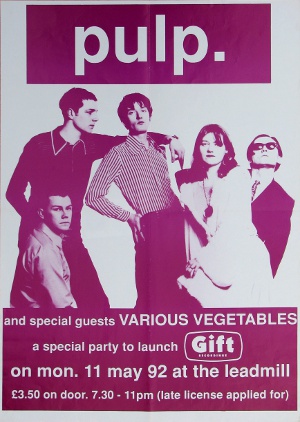 The Kids rubbed shoulders with dodgy media types on this historic night held to celebrate the launch of Warp's new 'indie guitar' label Gift. The new label's first two signings were being showcased tonight: the event was also a launching pad for Pulp's fab new single O.U. (Gone, Gone) which Orange, being so far ahead of the "competition", reviewed last month.

After a short delay. Sheffield's professional bridesmaids came on to a polite but rather muted reception. Pulp put on a tight but fervent performance, featuring, but not going mad with, the 'new' (ha!) album Separations (reviewed elsewhere in these pages). Tracks like Countdown (a single, about 300 years ago). Death II and Don't you want me anymore? (aww!) boded very well for the overdue long player. By the time they reached the swirling, delicious O.U., the crowd had become a lot more receptive. The band in turn seemed inspired by this belated burst of enthusiasm, and Jarvis accordingly decreed with solemnity that the stylopnone be turned up all the way.

Jarvis' performance on the night was a triumph of controlled caprice or carefully choreographed lunacy. His swaying, shimmying, arm-flapping antics were a surreal combination of the young Elvis and Mr Bean: judging by his camp karate kicks he must remember Nicolas Cage on Wogan. He provided the focus for a sharp, witty, assured set which I'm sure will find a wider (and, yes, larger) audience very soon. As the gig ended, the back-slapping media lig began; but Pulp were good enough to ensure that the night ultimately belonged not to record company freeloaders, but to The Kids. And that's how it should be. 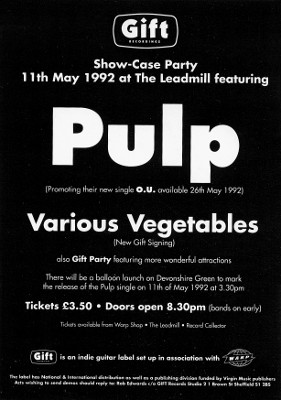