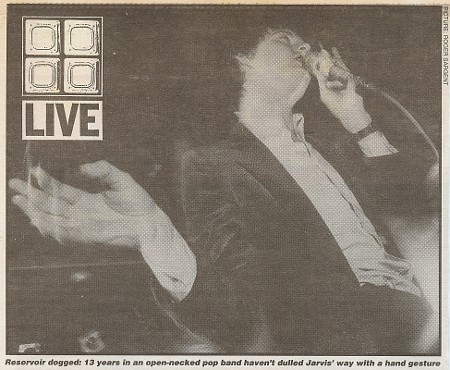 NEWCASTLE, SEX City. It's an ideal backdrop for the Last Great English Pop Group - as bands of Pulp's wilfully parochial vision inevitably find themselves tagged - with its small-town air of casual violence and sexual desperation. It is not difficult to feel yourself a prisoner of Jarvis Cocker's fevered imagination here, especially when, for an hour or so tonight, you are exactly that.

If a no-frills rock venue first seems at odds with the shabby ballroom elegance usually associated with Pulp, they swiftly sandblast those cosy joke-band preconceptions with a writhing, thrusting performance of gut-punching savagery. Jarvis sheds his speccy bookworm persona in seconds and the tinny Morris Marina whine which sometimes afflicts their records becomes a flat-out Aston Martin roar. They're no longer Bri-Nylon Ferry and Poxy Music, but the wired, visceral creature that has always lurked behind their twitching net curtains,

It's here in brooding opener 'Joyriders', with its sinister line about taking girls to reservoirs - the festering underbelly of British provincial life. Jarvis may deliver deadpan quips like some bad comedian, but there's a knife-twisting nastiness to Pulp, an edge perhaps born of 13 years on pop's hard shoulder being overtaken by lesser talents. He phrases his inter-song patter like a slow seduction, but something more disturbing, more forceful lies behind it.

Not that anyone's resisting his advances when the uncannily U2-like throb of 'Do You Remember The First Time?' detonates an all-female front row into frenzied movement while Jarvis hurls himself into a series of erotic coat-hanger contortions bordering on indecency. Cocker the sex symbol? Don't scoff. Sure, it's still honeymoon time for these chart novices, but behind the asthmatic geek pose isn't their frontman prime-grade Brit Neurotic Boy Outsider material with his bookish aloofness, unhealthy pallor and sexually-charged hymns to bedroom failure? He may have borrowed one too many manic hand gestures from Alvin Stardust and Ted '3-2-1' Rogers, but Jarvis's taut, articulate arrogance is more John Lennon than John Shuttleworth. And, judging by tonight's expert emotional striptease, he'll still be moistening knickers when he turns 50. Sometime next year.

For now, though, Pulp still have tricks up their dandyish sleeves. More than a decade as pop bridesmaids has honed them into versatile all-rounders: witness swelling tear-jerkers like 'Happy Endings', jarringly wonky art-disco workouts like 'His 'N' Hers' and rattling MFI-punk anthems of the order of 'Lipgloss'. It's a relentless, timelessly classic Brit-pop parade culminating in a hi-NRG assault on 'She's A Lady' - a head-on collision of Gloria Gaynor's 'I Will Survive' and Europe's 'The Final Countdown' with all the demented brilliance of both. This is pop as it should be played: by eccentric and slightly embittered old perverts who want to shag your little sister.

While Morrissey made every jilted wallflower a heroically doomed poet and Suede project seething passions into every tatty front room, Pulp - for better or worse - hold up a far more accurate mirror. Jarvis Cocker sings about settling for second best, about stained sheets and frustrated fumblings. He can still find thrilling glory in the whole sorry mess (in the revved-up jiggery-pokery of tonight's set-closer 'Babies', for instance) but more often he just encounters tawdry disappointment.

For all their supposed theatricality and kitsch nostalgia, the vision of British life Pulp leave behind them is uncomfortably real and utterly modern: leisure centres, domestic brutality and small-town violence, a shrunken empire hopelessly hamstrung by the past and pathetically unprepared for the future. Pulp may not quite be the Last Great English Pop Group but we can only hope - for England's sake - that they are the last of their kind. 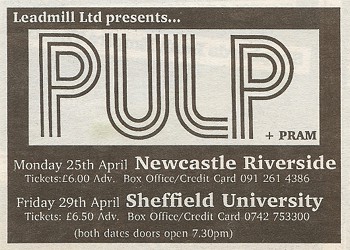