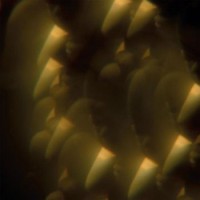 Jarvis wrote the music for the Neil Gaiman show, which began on 26th May 2016 on Sky Arts.

A promotional "scavenger hunt" was set up by Rough Trade. Four copies of the EP, each signed by Jarvis, were hidden in various locations around London. These locations related to places which appeared in the television series. Geocaching codes were released via Rough Trade's twitter account on May 28th, June 3rd, and June 6th 2016.

Remember: there's truth in every story ever told.