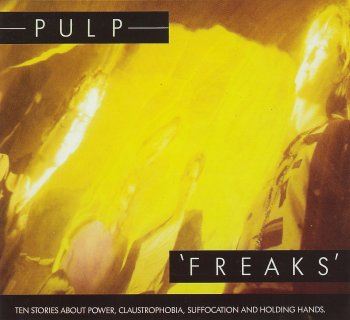 Freaks is Pulp's second album. It was released in 1987 to little commercial success. It has a much darker sound than its predecessor, It.

Now Listen: these freaks we're talking about, they're just normal people gone a bit wrong, that's all. Something happened to them and they never got over it. Now they walk around in a daze with twisted innards and blank faces, wanting to join in but too scared to make the jump. It's sad but don't bother crying: they still eat and drink and watch T.V. just like anyone else.
And they smoke.

In June '86, we started the "Freaks" album. It was recorded for £600 - in one week. The producer disowned it: he didn't want his name on it! This was the low point, emotionally, of my life. It's such a depressing album. There's some decent songs but they're badly done. "I Want You" is good, but there's a better version as a demo. The violin's miles out of tune - it's supposed to be a big ballad. "Don't You Know" came out on a 'Record Mirror' compilation "Fruit Cakes And Furry Collars" - it's the same version.

It was called "Freaks" because I'd been out of school four years and lived this marginal life with no success. I was living in a factory building, a drop in centre for all the freaks and misfits of Sheffield. We'd been doing something worthwhile and original and yet nobody seemed interested. This was the dark days of the mid-80s: "we're heading for a boom time, let's be happy". "Aye aye aye aye moosey" was in the charts. We were nowhere near the mainstream. Also, I was in the middle of the first proper relationship I'd had. I'd gone into this terrible depression of finding out what relationships were really like, but not knowing how to deal with it - you go out with somebody for six months and spend another eighteen trying to split up. All in all, I was not a happy person.

Do you find it depressing? I did. I weren't so happy at the time. I can't listen to it now because it was hard to record things back then. You're doing it for £800 and it sounds crap. Especially if you're doing stuff that is a bit grim. You've got to abstract grimness into something else to make it palatable: that's art, innit? If it's just grimness on a plate, it's just shit. We'd not been in the studio often and you think people know what they're talking about; you realise later they know fuck all. I liked the ridiculousness of writing 'Master Of The Universe' while being on the dole and not being the master of anything at all. It was the winter I'd fallen out of the window - I was stuck in a wheelchair at my mother's watching Lovejoy. So it had a certain grim humour.

IF IT'S a tonic you're after, a lift, a bit of light relief, then this record isn't recommended listening. If you're in the mood for a touch of dour introspection, however, then the opposite is true.

'Freaks' is so glum it hurts. There is no room here for joviality, Pulp are too wrapped up in immortalising their own manic depressive daydreams to consider the business of actually living. But somehow, despite this, to rudely turn them away is impossible.

This unarguably 'interesting' Sheffield band have turned the conveyance of moroseness into a fine art. They do it with style, cleverly ill-defined wit and even charm, softening us up with chirpy organ fizz-bangs and swooping violins; and then they make their move, charging forward with lyrical cutlasses flailing in all directions. We are left in a damaged condition, ripped and torn and literally drained of all optimism. It's great.

'Freaks' is a bit mad, a jagged collection of cruel words fastened to frequently enthralling music, the voice of Jarvis Cocher reciting the lyrics with a dry, almost mockingly tuneless nonchalance. More often than not he hits home and you realise what you're hearing is the truth.

'I Want You' for instance, deals with the way in which one's ego can intrude upon a loving relationship, while 'There's No Emotion' hammers home the hurt one feels when such a relationship is dead but neither party can bear to admit it.

'Anorexic Beauty' on the other hand, is likewise a song of love, but this time we're talking about a love for a woman who's starved herself to skeletal proportions and whose skin has turned an alluring shade of white. It's dedicated to Lena Zavaroni. This presumably is Pulp's idea of a 'fun' song.

They're about as amusing as a squashed snail, but I'll wager without hesitation that Pulp are streaked with mischief, and that's not all; for making the analysis of self-torment such a congenial experience, a quartet of stars is the least they deserve.

"FILE between Ian McEwan and Charles Hawtry," concluded one reviewer two years back, leaving us to tease out what that "between" is. Pulp are easily underestimated as ghosts from the Ealing or Hammer studio lots, standard bearers of the English-ness and depthless drollery we'd usually expect from El records.

The word "freak" comes nearer to their connection of comedy and horror: it suggests what's aberrant but recognisable, a source of laughter and shrinking fear. Even if Jarvis Cocker's vocal delivery brings Pulp within sight of It's Immaterial or The Fall, it's the crepuscular ballads, always bordering on histrionics, of Sixties godlike genius Scott Walker that are the nearest precedent.

Everyday life assumes the shudder of the uncanny in "Anorexic Beauty", where the ashen-faced and comically immobile mannequin girl exercises this dreadful attraction, comes too near beauty. In "I Want You", love is a catastrophic immolation. "I'll throw myself away, I'll break you because I love myself in you". In "They Suffocate At Night" intimacy develops till it wraps itself in polythene sheets, becomes exhaustion and vacuum, and "The Never-Ending Story"'s juggernaut Khachaturian refrain mimes endless reprieves for a failed love-affair.

THE going gets weird, 'Freaks' was the long-playing debut of Russell Senior (violin/guitar) and Candida Doyle (keyboards) who still form the musical core of the group. A schizoid affair in keeping with its title, the album took Pulp closer to their '90s sound, lurching evilly between blackly humorous, lush ballads like 'They Suffocate At Night' and 'There's No Emotion', and genuine horrorshow narratives such as 'Fairground' and 'Being Followed Home', each of which conjured fully the scariest aspects of its title. Also notable for the near-HM delusions of 'Master Of The Universe' and a classic Cocker love song, 'I Want You'. (1986)