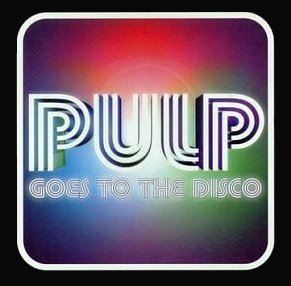 There is a photo of Mark Webber in the booklet despite him not featuring on any of the recordings.

Now, here's a clever young thing: following the post-overnight, nay over-decade success hangover that was the 'This Is Hardcore' album, some business smarty-pants thinks, "Eeek! We have alienated a significant proportion of the audience who danced their pants off to 'Different Class' so we must do something about it." Like what? Like put out a fabby compilation with a really zippy title which implies that Pulp are still the same old fun-lovin', knicker-swinging Lotharios of yore." Oh. Right.

Or not, as the case may be. Because 'Goes To The Disco' is, in fact, one of those dodgy releases where the words 'cobbled' and 'together' rear their cheeky little heads. A ten-track affair licensed from the Fire Records years, the music extends from 1984 to 1992 while the artwork barely extends itself into the realm of cheap-rate cutthroat made-for-Asda AOR collections. Good Lord above, this record looks crap.

There are times when the insides aren't that much better, either. History suggests that Pulp spent their career up until 'His 'N' Hers' making utterly fantastically tarty indie/art records which were callously ignored by the pigshite thick, lardy-arsed Suvvern 'journos' who thought that Sheffield was a patch of grass where famous cooks grazed. Think about it. But not for too long.

True, as the cliché still bloody well goes, Pulp's early days featured hints of forthcoming genius, but for the most part they were more excitable than genuinely exciting - see nervy ancient nuggets 'The Mark of The Devil' and 'Master Of The Universe' for further evidence. Still, as you may or may not have guessed, 'Goes To The Disco' focuses on the fivesome's more upbeat moments, and so it is that we go a-rumping and a-pumping through the likes of 'Is This House?' and 'This House Is Condemned' - both rejigged by Sheffield fiddlers Parrot & Winston - and we come to the sad but inevitable conclusion that while they probably sounded like tremendous fun at the time, in this context they are gruellingly minimalist, and you can't say that about too many Pulp songs.

'Love Is Blind' is cool, though, rescued from '91 and capturing a prime Cockerism in the line, "'"Spilt milk and dog turds in the grey ashtray morning light"''. An extended version of 'Countdown' is fine, too, as it quite literally squelches across the suburban nightclub from hell. And pride of place goes to the exuberant 'My Legendary Girlfriend', a brilliant wipeout of heavy breathing and epic vibes which really did stand up and say: 'Listen up you stupid buggers - we're going to be famous!'

Few people, alas, cared all those years ago. And obviously nobody involved in this project particularly cares about Pulp now. How? One last small but beautifully overzealous point: the live shot on the sleeve features Mark Webber, who didn't actually play on any of these tracks because he hadn't even joined the bleedin' band by then. Shoddy stuff all round. (4/10)