There are also rumours of a date in São Paulo, Brazil.

No official confirmation yet, but it is rumoured that Pulp will play concerts in Chile, Argentina and Brazil during November. 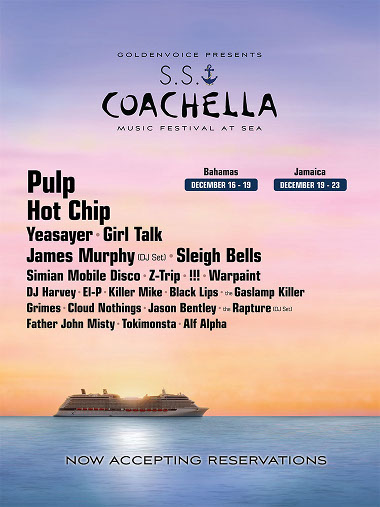 Pulp are to play concerts as part of two music cruises in the Caribbean. 'SS Coachella' is billed as a 'music festival at sea' and is being staged by the organisers of the Coachella Valley Music and Arts Festival.

The voyages on the Celebrity Silhouette cruise ship will be round trips from Fort Lauderdale, Florida. The first between 16-19 December will visit the Bahamas (Nassau) and the second between 19-23 December stops at Jamaica (Ocho Rios).

Pulp will play either one or two concerts during each cruise. Other bands on the bill include Hot Chip, Yeasayer and Girl Talk.

Prices start from around US$900 (£580), including service charges and taxes. Tickets went on sale on Saturday, 21st July.

Further details can be found on the official website: http://ss.coachella.com.

The article can be viewed online by following this link; http://nowthenmagazine.com/issue-52/sound/

Pulp have added another date in the UK on the 8th December, this one being in their hometown Sheffield. This was posted on the bands twitter: "Pulp come home for Christmas. Sheffield Arena, Saturday 8 December 2012. Tissues optional."

Friday, 4th May, is an unofficial 'day of action' in order to drum up interest in a reissued, 'deluxe' version of Pulp's final album, 'We Love Life'.

The songs which originally appeared on the critically acclaimed album only tell half the story of the busy songwriting and recording period which the group engaged in between 1999 and 2001 under various producers, including Walker Brothers legend Scott and long time Pulp/Pink Floyd/Beatles producer Chris Thomas.

Universal Music Group, in close collaboration with the group, issued two disc deluxe versions of Pulp's earlier albums His 'n' Hers, Different Class and This is Hardcore in 2006, offering up to the world the delights of songs such as Can I Have My Balls Back Please, Modern Marriage, The Boss... and Nick Cave fronting the band on a 'pub rock' version of Disco 2000.

Songs from the We Love Life sessions such as Cuckoo Song, The Quiet Revolution and Grandfather's Nursery have been leaked over the years to much acclaim from fans, but oddities such as The Performance of a Lifetime, M'Lady, St. Just and Medieval Owl have defiantly remained in the vaults.

Fans are encouraged to sign a petition to express interest in a We Love Life 'deluxe' edition.

Pulp will play on US talk show Late Night with Jimmy Fallon on Monday (9th April).

Jarvis Cocker is to present a new factual series on BBC Radio 4 starting next month. It will explore what Britons get up to during the hours of darkness. According to Jarvis, 'Wireless Nights' is "a nocturnal exploration of the human condition".

The BBC website reports that the first programme will feature: "a pub lock-in, a lonely prisoner at Wormwood Scrubs and a drunk who spends the night in an empty building."

There will be four half-hour programmes, starting on 5th April at 11pm.