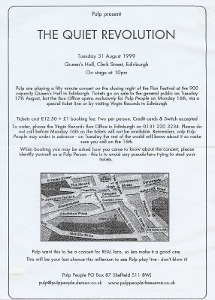 A complete audience recording has circulated on the Flux bootleg. The recording contains a short gap during Blue Girls.

The first part of the show showcased a six-song suite entitled "A Quiet Revolution", written and performed recently as the soundtrack to an abstract art exhibition in Venice, Italy. The band played behind partially closed Venetian blinds throughout the entirety of the piece, rendering them barely visible. Despite calls for their removal from the crowd, the blinds remained. All that could be clearly seen for this segment of the show were Jarvis' bare feet, just visible below the blinds. Jarvis later joked/explained that they were there as "A Quiet Revolution" was debuted in Venice.

Opening with a climactic, twinkling, film noir-ish instrumental, the band then rolled into a light, melodic, vaguely Kinks-style song with lyrics containing several allusions to the birds and the bees. Indeed, this seemed to be something of a theme, as a later song, featuring Jarvis playing a toy piano, featured several reference to "cuckoos", as well as being dedicated to "all the ornithologists here tonight". Another song saw Jarvis reading a spoken-work piece from hand-held notes, somewhat akin to earlier Pulp tracks like "David's Last Summer" and "Inside Susan". The backing for this track was described by one observer as "airy, industrious, brisk and vaguely French-sounding".

Most people agreed that the new material sounded more in the style of "This Is Hardcore" than anything from Pulp's previous records, although the slightly folky, ballad-esque tinge to many of the tracks recalled some of the band's earliest material. Jarvis, in orange and cream sweater and wine-coloured velvet flares, played acoustic guitar throughout.

A song presumed to be the title track of the piece, "A Quiet Revolution", was a shuffling, stop-start, samba-style piece, while the sixth and final song from this segment was a throbbing, urgent Velvet Underground-esque song which sounded quite dissimilar to anything the band have done in their recent past. It also saw the first outbreak of pogoing from the crowd.

Prior to the climax of this song, the blinds lifted and Jarvis thanked everyone for "bearing with us", as, he acknowledged, they were, "playing quite unusual tonight". Then, with Jarvis announcing it as "one you might know" the band launched into "Sorted For E's and Wizz". Another new song, as yet untitled, was then previewed, but sounding in a similar vein to tracks like "Something Changed" and "A Little Soul". Following this, Jarvis declared: "We haven't played this song in about 15 years. Some of you might've heard it before. But then it was all ponced up with piano. Still, better late than never", before playing a stripped-down version of "Blue Girls", a song from the band's 1983 debut album, "It".

One of our greatest bands, Pulp, no matter how mother-fruggingly essential their music and no matter how voluminous Jarvis' charisma, just can't compete with the Kremlin-sized hell-fire live genius of Spiritualized. Not that they've any interest in doing so, mind. They are Pulp and therefore can do whatever they damn well please.

Which is why tonight's performance is no comeback. Rather, it's a quiet revolution, a six-song suite performed a few weeks back at a Venice art exhibition. Tonight it's low-key and stripped-down, just the band and some new material. Playing behind some half-closed Venetian blinds.

Pulp, it seems, are taking their suburban voyeur, twitching-curtain mythos a little too literally. Halfway through the twinkling, urgent instrumental intro (no titles as yet), the blinds are raised two inches, revealing two bony feet protruding from velvet flares. This is all we see for the first five-and-a-half-songs.

Art? A mistake? No, Jarvis informs us, it's because these blinds were debuted in Venice. Crap gag, then. Good ol' Pulp.

The new material is hardly as challenging as rumour would have it. Mostly they're lushly romantic, lazy veranda show-tunes, most of which, oddly, seem to be preoccupied with bird metaphors (feathered variety). Musically, they're all stop-start rhythms and darkly rolling melodies. A song presumable entitled "Quiet Revolution" is no "Glory Days", or "Common People" anthem, rather a come-to-bed samba which threatens to build to a momentous climax, but which eventually peters out. Another sees Jarvis plonking away behind a toy piano like the twee-rock godfather he is. One is a dull spoken word epistle, while the best is a throbbing late-Velvets effort, (very) possibly called "Sunburst", at the crescendo of which the blinds raise and the crowd erupts.

Jarvis thanks us for bearing with them. Bless. Cue "Sorted For E's & Wizz" and a welcome cluster of "Hardcore" material. The message being, we're not back, we're still here.

Pulp aired their first new material since the release of last year's 'This Is Hardcore' at a special one-off show at Edinburgh Queen's Hall last week. They performed six new songs on the last night of the Flux Festival, in a show based on their recent performance at The Biennale Pavilion in Venice, Italy, dubbed 'A Quiet Revolution'. The songs were originally composed solely for the Venice show, which accompanied an exhibition by the Turner Prize-nominated artist Gary Hume.

After the Edinburgh gig, their first UK live appearance of 1999, Cocker explained to NME: "We were asked to write some songs to perform in this huge palace, amongst all these huge chandeliers and delicate ornaments, so we had to write music that would really work at a low volume. Once we'd written them, we realised that we wanted to develop them further and play them in front of real people".

All the new songs were performed from behind a set of giant Venetian blinds, a pun on their geographical inspiration. "The whole event was so serious and formal", Jarvis laughed, "we just wanted to inject a bit of humour into the proceedings".

As yet only two of the songs have finished titles. One, "The Birds in Your Garden", is an acoustic ballad with chirping bird noises and features the lyrics: "The birds in your garden / They all started singing this song / Don't despair it's alright". The other titled song is "A Quiet Revolution", which seems to touch on themes of dealing with growing older and watching friends die and disappear. Lyrics include surreal late-night ruminations like, "Is this a microwave I see before me / As the clock strikes 3am?" and, "What can I do with the rest of my life / Even though your friends are dropping like flies?".

Another new song to Pulp is a reworking of the bleak country-blues "The Coo Coo Song", first performed by country singer Clarence Ashley. It was rewritten earlier this year by Cocker for Nick Cave's Meltdown festival celebration of Harry Smith and his legendary 'Anthology of American Folk Music' LP. "I felt a bit uncomfortable with covering some of the blues tracks from that collection, doing that whole "I woke up one morning" thing," Jarvis explained. "So I just tried to adapt the basic song and tried to personalise it a bit more". The new lyrics include: "Well the cuckoo is a pretty bird / Sings the sweetest song I ever heard / I thought you'd like to know I still think you're the most / You left me lying here, married to a ghost".

Other tracks played at Flux included an instrumental which featured glockenspiel and a song dedicated to "the sun coming up", accompanied by a Velvet Underground-style chiming guitar played by Steve Mackey. The final new track was a Belle & Sebastian-type monologue from Cocker, a bizarre story about the retrieval of a brick from the bottom of a pool thrown there by a teacher. The rest of the set drew mainly on 'This Is Hardcore', and featured 'TV Movie', 'The Fear', 'Dishes', and 'This Is Hardcore', alongside 'Sorted for E's & Wizz'.

As to whether the songs would feature on a new Pulp record is unclear. Jarvis said they may well point the way forward, though he added: "We're off to write some new songs with the next record in mind".

Last Night of the Proms - Flux style - was hosted by Alex Foots, Dave Sefton and the inimitable Jarvis Cocker and Pulp.

The Flux Festival closed on a high note with this hastily arranged, low-key gig which saw queues stretching into the street.

On entering the hall, the crowd were faced with three Venetian blinds covering the stage. They were opened only slightly, after the intro, and then only on the lanky front man's face - the blinds opened fully only after Cocker had read poetry set to music, and were lifted completely six songs in.

The band were diverse in their choice of tracks, which included five much vaunted new tracks, all very much in the Pulp vein.

However, they played just 11 tracks in under 50 minutes, then left the stage. The crowd kept chanting but were surprised to see not the band but DJs - including Jarvis Cocker - return to the stage, kicking off with a jazz version of Jesus Christ Superstar.

And there ended the Flux Festival. Shame.