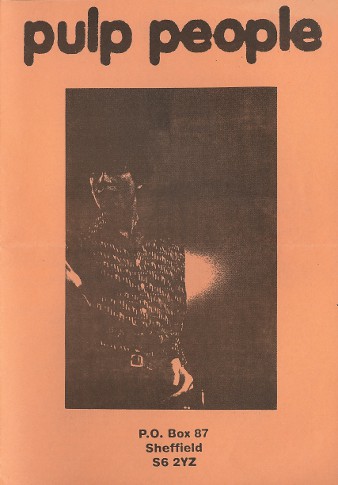 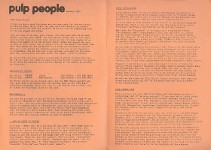 I hope you had a good Christmas and are now ready for the excitement of Pulp in 1994. We'll start the year with two concerts in London, and meanwhile the band and producer Ed Buller will be completing work on the new single and album.

1993 was full of so many good things, and this year will be so much better. As last year ended, the "Lip Gloss" single was in more homes (and hearts) than any other Pulp record so far. It made number 50 on Gallup and number 41 on the Network Chart. Radio One played the song so much we lost count, and we played live on "The Word". You could even hear "Lip Gloss" in the background of a scene on "Coronation Street" ! That was a big thrill for Candida because it's one of her favourite tv programmes. The UK tour was a big success, with many of the shows sold out, and we made two more short (but sweet) trips to France.

So let me tell you what will be happening. I wanted to make sure you Pulp People were the first to know about the record releases, so forgive me if dates and details are a little sketchy at the moment as nothing is finalised.

The Forum concert is the launch party for the NME "Brats Awards" and Pulp will play a 50 minute set. The Astoria show is for "The Beat" television programme, Pulp will play for 30 minutes and 3 tracks will be filmed for broadcast later in the year.

NEW SINGLE...
The next Pulp single is called "Do You Remember The First Time " and it will be released in late February/early March. On the b-side you'll find a very, very new song called "Street Lites" and also "The Babysitter" (with its working title of "Honeybunch", this song was played at the Garage concert last May). The video for "First Time" will hopefully take the form of a 10-12 minute short film including the promo along with various people's memories of their first sexual encounters. We'll let you have full release details as soon as possible.

...AND AN ALBUM TO FOLLOW
It's true ! There will be a new Pulp LP this year ! Work began back in September, and it should be finished by the end of this month. Its release will follow the single and should be late March/early April. The track listing has not yet been decided, but I can now exclusively reveal to you the titles of the songs that are being recorded. They are, "Lip Gloss", "Have You Seen Her Lately", "She's A Lady", "Joyriders", "Acrylic Afternoons", "Pink Glove", "Someone Like The Moon", "Do You Remember The First Time ?", "Your Sister's Clothes", "His & Hers", "Seconds", "Live On" and "David's Last Summer".

0THER INFORMATION
A few months after the new LP proper, Fire Records are planning to release a compilation CD of singles tracks from the "Freaks" period of 1985-87. The record will be called "Masters Of The Universe" and there'll be 13 songs together with sleeve notes by Jarvis.

We still have no firm details on the release of the Michel Polnareff tribute LP, which is due out anytime now. The album will be called "Holidays" and Pulp's contribution is "Le Roi Des Fourmis".

The video for "Countdown" is available on a compilation titled "The Historic Debt" (Jettisoundz JR222). You can order it, priced £12.99, from Visionary Communications, PO Box 30, Lytham St Annes, FY8 1RF, England. UK add £1 for P&P, Europe add £2.50, Rest of World add £6.50. The tape is available in PAL, SECAM and NTSC formats so do specify which format you require, and please tell them you heard of the tape from Pulp People.

On the 16th of November, Pulp played a live session for BBC Radio One's Mark Radcliffe show. This featured debut broadcasts for the new songs "Joyriders", "Have You Seen Her Lately ?" and "His & Hers", together with "Lip Gloss". The same day, Jarvis was recorded reading from the Ian McEwan short story "The End Of Summer" for a serialised broadcast on the same show. Sorry we were not able to tell you about these in advance, but tv and radio appearances are often arranged at short notice.

However, I can forewarn you that Pulp hope to return to Paris for another "Black Session" broadcast on France Inter's Bernard Lenoir show. The provisional date for this is March 15th, but this is not yet confirmed. We hope to be able to reserve tickets for Pulp People, so. please write to us if you would like to be present at the recording. We are also working on plans for a french tour after the LP release.

As well as the video for "Lip Gloss", Jarvis and Steve have been busy directing and producing "On" by The Aphex Twin and "City Sickness" by The Tindersticks.

PULP PEOPLE NEWS
There are now well over 500 Pulp People, but this means we have an evergrowing list of 'missing persons'. If you know any of these people please ask them to let us know their current address. We have had returned mail from [...] Don't forget to tell us if you change your address.

We have no Pen Pals for you this time, but there are a few Pulp People who need help in searching for old Pulp records. Alasdair Dickson of [...] is searching for a copy of "Dogs Are Everywhere", and so is Alex (our fan club manager), write to her c/o Pulp People. And Michael Ingleson of [...] is looking for any of the old releases.

You may have noticed that we recently increased the cost of membership. This was necessary because we want to be able to offer you a better fan club service. For basic information on tours and new releases you can join Island Record's free Pulp mailing list by sending your name and address to Pulp Information Service, Freepost CV7 44, Newbold Terrace, Leamington Spa, CV32 4BR, England. Please note that this service operates entirely independently of Pulp and all letters to the band and fan club should still be sent directly to the Sheffield PO Box address.

I promise you we are working on a new issue of DISCO-VERY, but progress is slow because the members of the group are so busy with the LP and other things. We welcome all your suggestions and contributions. Issue One is now out of print, so we must apologise to new members to whom we have been unable to send a copy.

Please let us know if you have any ideas on how we can improve our fan club service.

Now, it's only an idea, but for some time I have been thinking about a Pulp People convention. Everyone is so busy at the moment so I've no idea when we will be able to organise this for, but I would like to ask you if you think it's a idea, and what kind of things you would like to happen at such an event. How many of you would be keen to attend, and should it be in Sheffield or would London be more suitable ?

T-SHIRTS SPECIAL OFFER
We have a very limited supply of the white "Lip Gloss" t-shirts left in stock, and are offering them to Pulp People at a special price to clear them out. The shirts have the full colour cover design on the front and say 'Pulp' on the back. We have S/M/L/XL sizes but if your requested size is unavailable, you'll be sent the next size down (because skinny is better than baggy!). The special price is £9 (to UK) and £10 (rest of world), including P&P. Hurry while stocks last !

Well, that's all for now. Thanks for your continuing support and devotion. Please keep the letters coming and let us know your suggestions. We try to reply as soon as is possible.

So here we are in the new era - god, that garage food gets to you after a while, doesn't it ? But generally I'm feeling good and I hope you are too. Yes, yes, I'm feeling good because 1994 is the year that Pulp are finally going to release a proper LP. In fact, that's what I've been doing with most of my time lately, so if I look a little pasty when you next see me, I'm sorry - but that's what three months locked indoors does to you.

Anyway, thank you very much for making the Lipgloss tour such a success - keep wearing it with pride, lay off the cigarettes, and by the way ; do you remember the first time ?