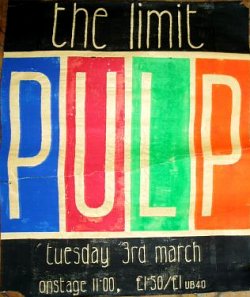 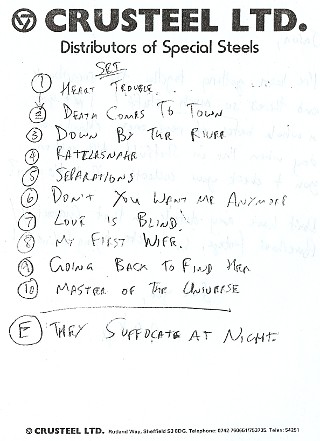 There is an audience recording in circulation.

These reviews are taken from the first Pulp Scrapbook. Unfortunately there's no indication of which publication they came from.

'This first song's about dying.' Not really what we expected, but then again nothing was. The stage covered with silver foil and other strange coloured bits and pieces took on a sci-fi grotto like appearance. All we needed now were the spacemen.
What did arrive was a bloke who seemed to have landed in the wrong year and he wore a jumper. This was not any jumper, indeed no, this was a magnificent piece of clothing, yellowy orange with immaculate black trim and three huge resplendent stars... hideous. Welcome to Planet Pulp.
The band haven't played their native Sheffield for some time but have been trying to extend themselves away from home. Following good reviews from the music press (and in Blitz) of their London escapades they arrived back with a bag full of new material, and announced that tonight would be an experimental evening. It was not as 'poppy' as some previous stuff but refreshingly different. Pulp have redefined conventional structures, and songs are choppy, lots of little pieces put together in much the same way as The Specials did in 'Ghost Town'.
Pulp are original, varied and in no way limited or tied down. Jarvis Cocker, the singer, was deep-voiced but flexible and constantly intense. When Russell Senior, the guitarist, swapped for a violin the combination with keyboards produced a distinctive exotic, oriental flavour. The bass gelled the framework together, Steve [Havenhand] sitting the whole gig not so much in a cultural pose but courtesy of a broken ankle. While sometimes too plodding and slow, the jumper's frenetic and rakish movements gave yet another dimension to Pulp's maze of musical tangents.
The last couple of songs were more immediate and rocky and while it was a good note to finish on it didn't really do them justice. The beauty of Pulp is their differences, without a mishmash of style and speed they became just another band, any band. Pulp will not appeal to everyone, but go and see them for a welcome and interesting alternative to the standard dross kicking around at the minute.
Rob and Darren

Jarvis Cocker peers out of a jungle of perspex and foil. He looks nervous. "This is the new Pulp," he mumbles.
The Pulp structure may have been reshuffled but the flat, dead-pan irony of their delivery has lost none of it's weight, the consciously bland flavour of their melody none of its soft punches. Creeping in however is a gradual sense of retreat. Cocker, Senior and co. seem to be withdrawing in to themselves, tossing aside vestiges of compromise on the way. Their humour is darkening and becoming more incisive - take songs such as 'They suffocate At Night' or 'Dogs Are Everywhere' - and their newer material totters dangerously on the edge of total self-parody.
As usual, the notorious Limit P.A., which could make Chopin himself sound like Mrs Mills, did a fine job of putting the sound through a mangle of pips and distortion. Nevertheless Pulp soldiered on, perhaps on the way to creating a whole new genre of intelligent pop or (though I sincerely hope not) down a cul-de-sac of self indulgence.
Claire Morgan Jones

PULP, WHO like to change every now and then, like Doctor Who, are playing tonight with a new sound from a new line up, but they still look and sound like no-one else in the world.

This is not just because they use strange instruments like a violin and electric organ - it's because their way of making music is theirs and theirs alone, owing allegiance to no-one.

But they have changed. They sound positive now and demand attention, whereas their recent L.P. Freaks, recorded a year ago, sounds much more introspective. This is, I suppose appropriate for "Ten stories about power, claustrophobia, suffocation and holding hands." They only played two songs from Freaks tonight, but the new material still has the same tone: "That song was about dying", says Jarvis Cocker. "Actually, this next one's about dying as well."

Its folly to compare Pulp on stage to Pulp on record, however, because they do like to put on a show. Tonight we had bubbles, yards of tin foil, glowing orange globes, a slide projector and cine film of motor racing, as well as Jarvis' repartee and dancing. All this in a night club like an underground car park.

Pulp used to be interesting. Now they're wicked. 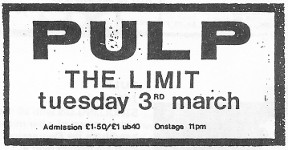