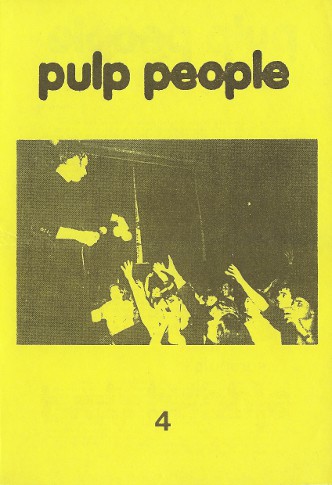 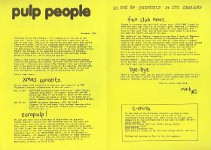 Greeting fellow Pmlp People ! It's coming up to the end of the year and I think it's okay to say it has been a good one for us. And we hope that 1993 will be even better and much more Pulp packed than ever before... we're all planning ahead and a new single is already recorded. The song is "Razzmatazz" - a pocket synthony that has Marvellous Pop Record written all over it in big, bright letters. Expect the release to be sometime in late January or February, and of course there'll be lots of concerts and exciting things going on around it... we'll keep you posted...

Since I last wrote, we've done lots of travelling around playing concerts and making new friends, and there are now more Pulp People than ever ! (You are not alone.) The 'Babies' tour was lots of fun and it was good to see so many of you at the concerts. The ULU show was a real success and a great surprise for us. Thanks to you and your friends for coming out to see us and buying the record.

Xmas concerts.
We are happy (and excited!) to announce that there'll be TWO Pulptastic concert celebrations to end the year...

Europulp!
We just got back from a few days in Paris where we played a "Black Session" concert that was broadcast live on the radio all over France, and even did a signing session in a record shop ! They really seem to like us over there, it's a shame it is so hard for them to get the records. (We're doing our best to sort this out. 1993 is sure to see some definate Pulp action in Euroge, but meanwhile here are two UNCONFIRMED dates... 19 or 20 December in Paris (Espace)... 15 January in Nantes... neither of these dates are definate so if you want to find out for sure then either write to us with an SAE/IRC or call Rosebud on Rennes 99 65 04 14 or Danceteria in Paris on 43 26 16 82.

Fan club news.
Thanks to everyone who said kind things about DISCO-VERY, hopefully sometime next year there'll be another issue. Meantime I'm working on a scrapbook of press cuttings since the very beginning. More news on that next time. And we have some other ideas to entertain you with but that's all secret for now.

The winner of the 'Babies' competition was Miss L Quinn of Edgeware. She made 205 words from the letters in Stylophone and wins the clapperboard made by Steve for the 'Babies' video shoot, a signed copy of the video, and the stylophone that Jarvis used to play onstage (and can be heard on the "O.U." B-side, "Space".) Susan Wilson of Rotherham came a very close 2nd with 203 words, and Lyn Ward of Peckham and Kevin Pickstock of Luton were joint 3rd with 186.

We've no pen pals for you this time, but if any of you do want to get in touch with other Pulp People then let us know and we'll print your address in the next newsletter.

Bye-bye.
There'll be more news just as soon as there's definate stuff to tell. Hope you all have a great Christmas... best wishes come from Jarvis, Russell, Candida, Steve and Nick... and me too.

By the time of the Christmas concerts, we hope, to have some new T-shirts but we still have a few of the pulp/super-stars design left. Each colour is in very short supply so do list alternatives if you want to order. We have
Short sleeved (£8)
Brown (L) Orange (XL) Pink (L/XL) Yellow (L/XL)
Long Sleeved (£10)
Blue (XL) Turquoise (XL)
And there's a couple of XL blue star design shirts £10 also.

Postage and packing is free to fan club members.

Finsbury Park... BBC coffee at Maida Vale... Dancing during a thunderstorm at a motorway services somewhere on the outskirts of Birmingham... Entertaining and thought provoking letters to make long van journeys pass quicker... My first ever glimpse of Scotland... Pink Panther stickers in a cafe on the North Yorkshire moors... Zen and the Art of Star Maintenance... How many people can you think of with surnames beginning with B?... Conversations with Russian exiles in coffee bars... Pouring a bottle of ice cold mineral water over myself in Cardiff and getting the best sexual thrill I've had in ages (try it with a friend sometime)... A live broadcast to the whole of France on a wet Parisian evening... ULU... Powercuts in Brighton... Walking sticks in Leicester... The Chart Show in Bristol...

I owe these experiences to you and that's why I love you - and I don't care who knows it. Have a marvellous Christmas and Nu Year.